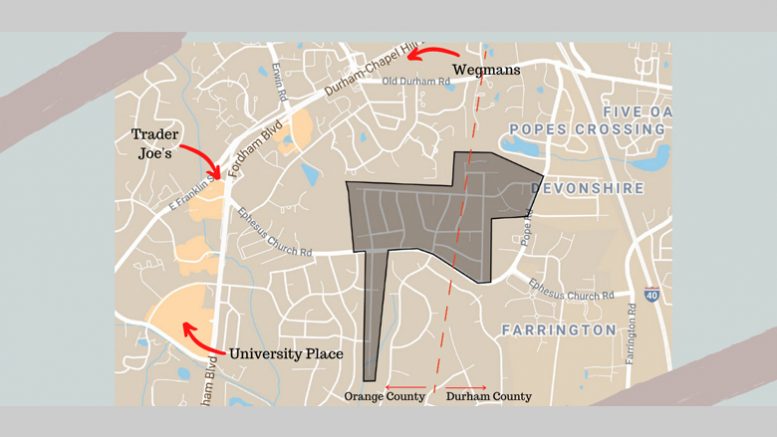 “Halloween is pretty stellar in Colony Woods,” says resident Jenn Mallen. “We draw folks from other neighborhoods.” A parade involving around 100 masquerading kids (and adults) forms in Colony Woods each year — or at least it did before the coronavirus pandemic — before smaller groups splinter off for trick-or-treating throughout the neighborhood.

Milisande Timblin, another resident of Colony Woods, describes the annual tradition as having “always evolved organically” during her six years there. “One neighbor was very influential in establishing the Halloween ‘parade’ several years ago, but she moved this year. Rick Fahr was a police escort a few times to help clear the street. Other than that, it was mostly a word-of-mouth thing where we told people, come trick or treat with us, and they came,” Timblin notes.

With COVID-19 prompting reconsideration of nearly everything in 2020, the annual Halloween tradition may look a bit different this year.  However, what hasn’t changed through the pandemic is a neighborhood-wide interest in connecting and a desire to be there for one another.

Pat Carstensen, who has lived in the neighborhood since 1988, maintains this spirit has been present for decades. For example, she tells a story of how neighbors ran lengthy orange extension cords to each other’s homes to share power when Hurricane Fran hit the area in 1996. While she acknowledges this might not have been the safest thing for neighbors to do, it demonstrated the sharing nature of the community.

More recently, the community has come together to focus on the “woods” part of Colony Woods. Since the beginning of the pandemic, long-time residents Anne and Bill Brashear have been leading a project to clear invasive and non-native vegetation from the wooded area behind the neighborhood, in an area they affectionately now call Legion Park.

As a large yellow butterfly floats by on a warm morning in September, Bill notes how birds and insects won’t even touch the area due to the smothering of native plants. “This is the end of the food chain now,” he laments.

But far from being deterred by the deeply intertwining wisteria vines in the trees and the swaths of Japanese stiltgrass on the ground, the project has served as a local bright spot during this global health crisis. The Brashears note that dozens of residents of Colony Woods, and even other nearby neighborhoods, have worked together weekly since March to give life back to this undeveloped forest area tucked between Ephesus Elementary and Studio A Dance Arts. The work continues each weekday, starting around 9 a.m., and all are invited to participate. Barnsley Brown notes it was the trees that drew her to the area initially in 2002. “I loved all the trees and the family atmosphere,” she says.  “It’s an old Chapel Hill neighborhood with lots of professors, professionals, medical doctors and cultural creatives who live here.”

Indeed, Colony Woods is an in-demand neighborhood for single-family homes. The 22 houses that have sold in 2020 have averaged only 14 days on market, with ten of those selling in less than a week.

The demand for the neighborhood is based both on its reputation as a strong community and the price of the houses. The cost of homes in Colony Woods is favorable compared to the greater Chapel Hill market, where the average in 2020 has been above $500,000. Comparatively, the 22 sales in Colony Woods have resulted in an average sales price of $335,000 in the same span of time.

A reasonably-priced neighborhood with a good community, wooded trails and annual traditions sounds great, and the neighbors report no drawbacks for the area. There are a few geographic and boundary oddities to Colony Woods worth exploring — none of which are problems, per se. Rather, they are simply idiosyncrasies of the neighborhood.

However, none of these unusual boundary issues negatively impact the feel or the love the residents have for the area.  Mallen finds it easy to create a laundry list of positives.

“Generally speaking, it just feels like home. There is space, but you have neighbors. It is truly multigenerational, which I really enjoy,” she says. Making an Offer in the Current Housing Market

Be the first to comment on "Neighborhood Focus: Colony Woods"