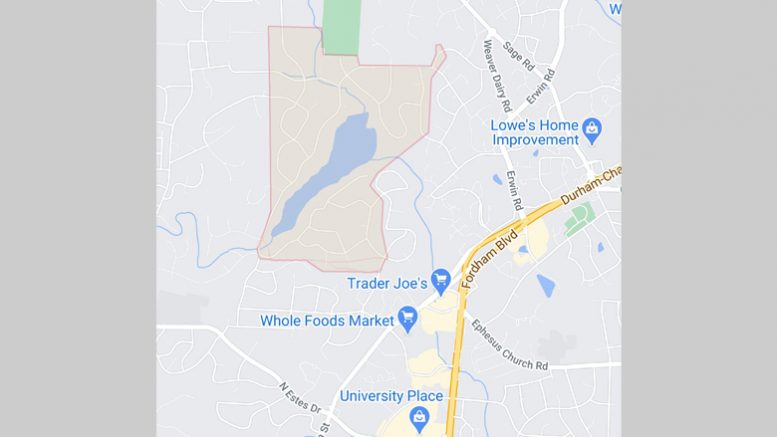 There is a lake in Chapel Hill that lights up around the holiday season.

The annual Light Up the Lake experience in the Lake Forest neighborhood not only brings a beautiful display of illuminations, but also results in helping others in the area. “Several (home)owners are supporters of the SECU Family House and the Ronald McDonald House, and offered to donate to those charities in proportion to the number of docks on the lake that were lit up,” says long-time resident Lisa Carey.

Carey notes that the decorations that adorn the many docks are as varied as the residents themselves. She says, “a flotilla of canoes/barges/kayaks and even the occasional paddleboarder goes around the lake to count the lit docks on Christmas night.”  She estimates more than 35 docks sparkle with the festivities each year.

“It is festive, beautiful and community-oriented,” she proclaims, “just like the community itself!”

Megan Johnson, another Lake Forest resident, agrees about both the beauty of the area and the community orientation. She describes the area as being “a really open and welcoming community with a shared interest in the lake and outdoor activities.”

However, an additional interest drew the attention of her and her husband, Mike, when they were home searching — the architecture. Lake Forest features many homes designed in the mid-century modern style, which she found very appealing.

The presence of this design style is logical, given that the majority of homes in the Lake Forest neighborhood were built between the mid-1950s and the early 1970s just northwest of the convergence of East Franklin Street and Fordham Boulevard. Although some homes in the area have been built (or rebuilt) in subsequent decades, a part of the unique charm of the area is the featuring of high-end older homes.

While the sizes and styles vary, the homes of the neighborhood do not necessarily meet the stereotypes of the time period in which they were built.

We often think of smaller homes with tiny closets and segmented spaces from that time. Here, although you will find the typical brick ranch in Lake Forest, you are just as likely to find homes larger than 4,000 square feet with open designs and interior flow. Architecture styles range from the aforementioned mid-century modern to split levels and from cottages to traditional.

Although sale prices are higher in Lake Forest than either of these comparison neighborhoods, the table below shows that there is also a broader range of price points in Lake Forest. This is reflected in the difference between the median sales price and the average sales price.

As demonstrated in the table above, Lake Forest homes take slightly longer to sell, on average, when compared with Coker Hills and Colony Woods. Although there can be many reasons for pace of sales in a given neighborhood, in this instance the higher average price point is the likely culprit.

Still, the neighborhood is sought after by buyers and adored by residents. After all, there are not many neighborhoods that offer their residents an actual beach! Carey says the neighborhood is a balm for her in an increasingly fractured society. “Living in a neighborhood where people are truly community-minded is so important,” she says. It also provides her a peaceful retreat, where she can “come home and watch the sun set over the water.”

“Can’t get much better than that!” she exclaims. Are iBuyers a Significant Factor in Southern Orange County?

Be the first to comment on "Neighborhood Focus: Lake Forest"