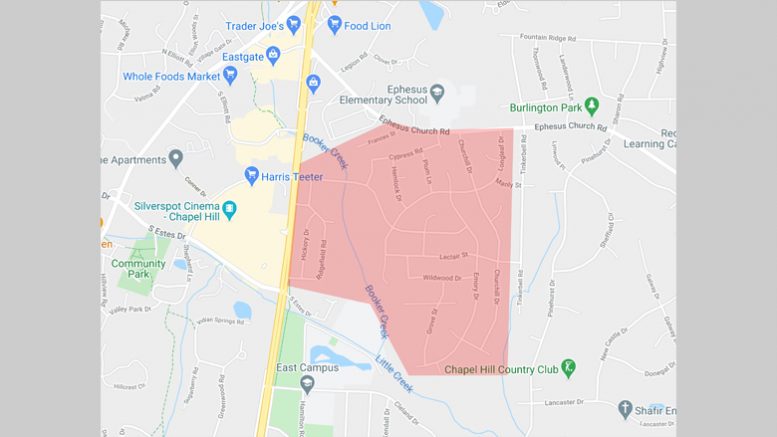 Anthony Edwards, who lives in the Briarcliff neighborhood of Chapel Hill, says the residents there show considerable care for each other.

“I have a 101-year old neighbor. Around him, he has one neighbor who calls him weekly to check on him, another neighbor who picks up his newspaper and garbage cans, a couple of us who have phone numbers of his adult kids and all of us keep an eye on solicitors to keep them away from preying on his fragility. He never asked us to do this; we just started doing this on our own. That’s the kind of people who live here,” Edwards says.

Located just east of University Place, with a western border of Fordham Boulevard and northern boundary of Ephesus Church Road, the neighborhoods of Ridgefield and Briarcliff are highly sought-after by buyers looking for a good combination of a lower price point for Chapel Hill, convenient location and a strong sense of community.

Although they are consolidated in the Multiple Listing Service, the area also includes the distinct Little Ridgefield community. Combined, these three neighborhoods cluster together to form a sizeable collection of more than 500 homes, occupying more than 20 streets.

Even with the area being as large as it is, the residents report that the tight-knit nature of the community is one of the biggest selling points.  When asked about her favorite aspect of the neighborhood, Elizabeth O’Nan, who lives in Little Ridgefield, simply states, “the wonderful neighbors.” Fellow Little Ridgefield resident Susan Salzberg echoes that sentiment, reporting, “our neighbors are thoughtful, helping and pleasant.”

Lisa Bohn, a resident of Briarcliff, notes that she actually spent her childhood in the neighborhood, and then returned to purchase a home after moving away for colleges and work. She knows other residents who have done the same. “That’s such a testament to the type of neighborhood it is — friendly, welcoming, solid, stable, lovely,” she says.

Spontaneous activities spring up as well. Andrea Wilkinson, a resident of Ridgefield, recalls stumbling upon a volleyball game. “We were immediately invited to join in,” she says.

It is clear from these examples why the residents enjoy living there. Unfortunately for buyers, it is relatively uncommon for homes in the area to come onto the market. Over the past 12 months, the combined areas have seen only 14 closed home sales, with three others currently pending and only one active listing as of this writing. Compare that to Southern Village, which has roughly the same number of homes and has had 32 closed sales over the same period.

The areas are seen as a more-affordable option in Chapel Hill, and this is reflected in comparison of recent sales. As seen in the table below, the median sales price among closed homes in Ridgefield/Briarcliff over the last 12 months is notably lower than the sales price for all of Chapel Hill during that same period of time.

Over those same 12 months, the median “days on market” for Ridgefield/Briarcliff is only four. This indicates that when homes become available, they generally receive offers quickly. Of course, in the current market, the same can be said about much the Triangle.

There are a few downsides to consider with the Ridgefield/Briarcliff area. The most notable may be the presence of a flood plain associated with both Booker Creek and Little Creek, which impacts several of the streets within the communities. If you are home searching in this area, be sure to ask your agent about that zone. Additionally, for Little Ridgefield residents, the city’s proposed Fordham Boulevard Sidepath Project may add access changes worth monitoring.

Challenges aside, these three clustered neighborhoods are beloved by residents. Wilkinson summarizes the welcoming, inclusive spirit in noting, “My husband and I were exploring neighborhoods in 2016 and were immediately charmed by this one. Lots of people and families were out and about, waving and friendly. It felt like home.” Be the first to comment on "Neighborhood Focus: Ridgefield / Briarcliff"