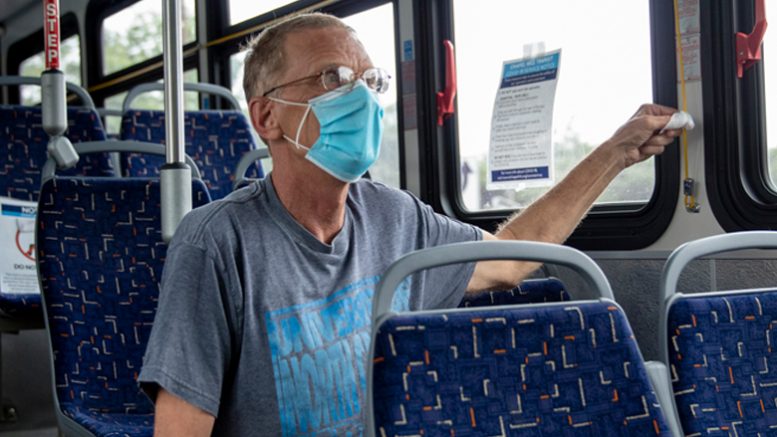 Philip Stephens pulls the cord, signaling he wants to get off a Chapel Hill Transit bus. For the first time in 40 years, some buses now run on Sunday. Photo by Landon Bost.

Stephens knows the bus routes so well that he rings the bell a half-block before his stop. He has lived in Chapel Hill for almost 50 years and has been a regular patron of Chapel Hill Transit since 1988. At the beginning of this month, to Stephens’ delight, CH Transit started offering Sunday transit services for the first time in nearly 40 years.

“Sunday without a bus is a harder day where I mainly was going to stay inside,” said Stephens, who suffered a brain injury 28 years ago and has been without a vehicle for the past 25 years.

“Now, I can get out and walk around on Franklin Street or go to the grocery store, whereas before I had to walk a mile to the mall to go get groceries.”

In response to the COVID-19 pandemic, CH Transit has shrunk some of its regular weekday services while expanding on Sunday. Sunday service now includes the A route, CM route, CW route D route, J route, NS route, NU route and U route.

Chapel Hill-Carrboro boasts the second-largest transit system in the state. Before COVID, it carried nearly seven million passengers a year, with one of the highest ridership per capita in the U.S., according to CH Transit Director Brian Litchfield.

“We couldn’t operate all of our routes while maintaining opportunities for physical distancing on our buses,” Litchfield said.

“So, what we did is we looked at our system. We evaluated our needs based on not only ridership but also taking a look at where’s service is needed the most throughout our community.

“We’re looking at access to jobs to employment opportunities to health care to community-type facilities and locations and then also access to those that need service the most. Was our process perfect, absolutely not … but we feel pretty good in knowing that we provided a core group of routes that provide access to meet those goals.”

In responding to the pandemic, CH Transit has studied local, statewide, national and international safety protocols, Litchfield said. Those protocols mean masks are required and glass separates the bus operator from the rider. The seating capacity on standard 40-foot buses is now 10, and 15 on 60-foot articulated buses.

A recent study from Paris noted that zero of the city’s 150 COVID-19 clusters from early May to early June originated on local transit systems.

“Things that we’re doing to keep folks safe, that’s an ever-evolving list,” Litchfield said. “Most recently, we started testing and installing UV lights within our HVAC systems. As air goes through the buses — in addition to fresh air — it’s also being cleaned by the UV lights which have been used for a long time in places like hospitals and emergency rooms and other places like that where sanitation is incredibly important.”

CH Transit employees are also required to undergo a self-administered COVID-19 screening in accordance with the CDC guidelines before reporting to work.

Despite snowstorms, hurricanes and bus fires, Litchfield said COVID-19 is his toughest challenge since coming to Chapel Hill 12 years ago. His anxiety, he said, has been “incredibly high” during the past six months.

“I go to bed worrying about my team members,” Litchfield said. “And when I do fall asleep and wake up, I wake up worrying about them. At the same time, also worried obviously about not only our community and all the impacts on that, but also my family, my friends, as many people are. But while this has been incredibly challenging, I’m very proud of how our team members have responded to this challenge. They’ve responded magnificently.”

Marcus Campbell, a bus driver, tends to his child after he cooks breakfast in the morning before heading to the CH Transit building on Millhouse Road. Along with his coworkers, Campbell said he had concerns about operating buses during a pandemic.

“If we didn’t have the protocols that we have,” Campbell said, “and the process right now [he would still be concerned]. And speaking with management and letting them know our concerns beforehand because we spoke about [COVID-19] and voiced our concerns. And they were upfront. They told us.”

Danee Fields has been a Chapel Hill Transit driver for less than a year. Buses, she said, undergo thorough sanitization before they leave the lot, and when they return, “I make sure there’s nothing on the steering wheel,” Fields said, “because people touch their faces, their eyes.

“I think (COVID-19) just made me more aware. I’m already a clean person, but thinking about, ‘Oh!, let me wipe this down, let me wipe the handle down,’ you’re just more aware of what’s going on.”

Fields said many residents seem unaware of the new operating hours. She typically doesn’t see her first passenger on Sunday until her fourth ride. CH Transit will test increased rider capacity on the FCX, NS and S routes between peak operating hours from 6-9 a.m. and 4-7 p.m. over the next couple weeks. Standard buses will hold 15 instead of 10 passengers, and articulated buses will contain 21 instead of 15 passengers.

“That’s not something that we do lightly,” Litchfield said.

“We’re not trying to encourage everyone to ride the bus now. We’re only encouraging folks that need to use the bus to get to and from their appointments, to and from jobs, those sorts of things, to use the bus. Certainly, wear their face coverings or their face mask, if they can. But we’re going to try that, to be more consistent with what other transit systems throughout the region have been using for several weeks now.”