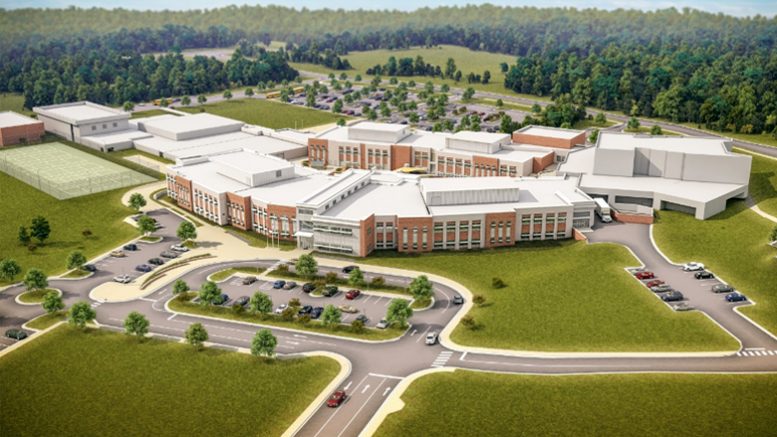 Three years after work commenced on the renovation of Chapel Hill High School (CHHS), the Chapel Hill-Carrboro City Schools (CHCCS) district is ready to show off its new, state-of-the-art facility.

The original campus, which opened in 1966 as the town’s first racially-integrated high school, had suffered in recent years from a host of problems, including malfunctioning HVAC systems that resulted in classrooms being either too hot or too cold; flooding and consequent mold issues that rendered certain areas unusable and deficient wireless internet access. “The upkeep on the existing building was very expensive and it was outdated, almost 60 years old,” said CHCCS Chief Public Information Officer Jeff Nash. “It wasn’t designed to serve students in 2020 and beyond.”

To remedy these and other long-standing problems, CHCCS district voters in 2016 approved a bond referendum that would raise $73 million for capital improvements. These funds originally were to be used to finance both the renovation of CHHS and the renovation of Lincoln Center, the site of the community’s former segregated Black high school that now serves as the CHCCS administrative headquarters. However, due to escalating construction costs, it was determined that the funds would only suffice to carry out one of the two projects, and the district opted to give priority to renovating CHHS.

The official groundbreaking ceremony took place June 12, 2018, with Mosely Architects/Raleigh serving as the design firm on the project and Barnhill Construction/Raleigh the leading contractor. The school has been almost entirely reconstructed. Of the original campus, only one academic building and the Hanes Theater have been preserved. In place of the two buildings that were demolished and the 14 mobile classrooms that were removed, three new buildings have been constructed.

According to CHCCS Executive Director of Capital and Facilities Eric Allen, the plans for the renovated school were developed by a committee comprising community members, teachers, administrators and students. “One of their themes was to establish a more secure campus, not only with connectivity of buildings but with more than one way to access the school site,” he said. “Originally all entrances to the campus came off High School Road.”

Mr. Allen described some of the highlights of the new facility: “The large new courtyard includes a rain garden, greenhouse and rain water collection cistern, along with seating for outdoor dining and an outdoor classroom amphitheater,” he said. “The interior incorporates extended learning areas that are located within each classroom wing. These are extensions of the classroom that provide areas for various learning styles, whether they are small group work, individual work, or a space teachers can utilize to teach outside the classroom.”

Mr. Nash added that the new school features a state-of-the-art media center as well as upgraded vocational education facilities. “For the culinary program,” he said, “the kitchens are phenomenal.” According to the CHHS Parent-Teacher-Student Association (PTSA), which toured the school in September 2020, the culinary lab “is equipped with professional restaurant-style equipment including convection ovens, industrial dishwasher, multiple ranges, and prep stations.” The PTSA report also noted the spaciousness and abundant natural light within the new buildings.

According to Mr. Allen, many of the materials used in the new construction, such as the polished concrete floor and brick exterior, reflect the durable materials used in the original 1966 structure. “Other new materials are more durable and energy efficient,” he said, “including energy-efficient HVAC systems and energy-efficient windows.” Mr. Nash added that, “[The new building] will use less energy than the previous building and provide more comfort at the same time.”

To those familiar with the openness of the original CHHS campus, one of the most striking changes associated with the renovation is the enhanced security features. “The main building entrance has a secure vestibule that requires visitors to enter the main entrance area before they are allowed in other portions of the building,” Mr. Allen said. “The campus is enclosed to provide connectivity among all the buildings instead of having an open campus layout with all separate buildings.”

The original construction budget for the school renovation was $62.6 million and the final cost was $67.9 million, Mr. Allen noted. “The difference of these costs was the combination of additional scope added during construction, unforeseen conditions during renovations, and various requests by Code officials.”

A small ribbon-cutting ceremony will be held Aug. 3 for elected officials and the media. Later in the fall, there will be an opportunity for the general public to tour the renovated school. “The new facility is state-of-the-art,” said Mr. Nash. “It accommodates the way teaching and learning are done now and the way they will be done in the years to come.”

Correction: An earlier version of this article mistakenly stated that the Aug. 3 ribbon-cutting ceremony is open to the public.