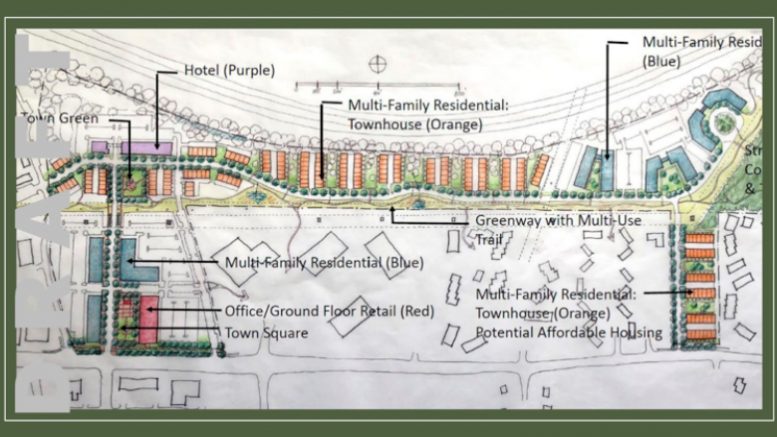 By Julie McClintock and Gordon Whitaker

Last year the Chapel Hill Council began exploring and investing in a development plan for approximately 55 acres spanning two contiguous parcels located on the north side of Weaver Dairy Road along I-40. According to Mayor Pam Hemminger, the council wants to be proactive about what development or redevelopment occurs here because members were unhappy with the development proposals received to date — mostly for tall apartment buildings.

Council members believe if all the work is done up front they will attract a developer to implement their plan. Additionally, concern exists about a number of mobile home parks in the area that are about to be sold, leading to approximately 162 families with no affordable housing. The council had hoped to create alternative affordable housing for these families.

An article in The Local Reporter ​from July 2020 noted that the town’s concept plan was developed by town staff based on multiple consultants’ reports. In the updated January 2021 version of the plan, the combined site would host even more units than originally proposed. The proposed plan now calls for as many as 720 market-rate apartments spread across multiple four-story buildings.

As the original article noted, even the earlier plan would involve a major departure from a 2007 Northern Area Task Force small area plan crafted by town residents, advisory board members, and one town staff person. Let’s review the reasons why the town council took the unusual step of hiring consultants and developing rezoning plans for these properties.

First, a stated council objective is to provide housing that meets the needs of displaced manufactured home residents. One of the parcels that would be developed under this proposal currently contains a mobile home community, all of whose residents would be displaced without any clear place to relocate within the town.

The second reason is that the town council is interested in providing more “missing middle” housing. One consultant hired by the town suggested these properties would attract households earning between $75,000 – $150,000. For rentals, there arguably would be demand for units that rent at prices up to $1,300 per bedroom per month if you do not mind living next to I-40.

Another council objective is to bring walkability and vibrancy to the area by planning a mix of uses, a greenway and destinations such as parks, dining and retail. Granted, a mixed-use community is harder and harder to achieve, especially in a tough location.

Finally, the mayor and most town council members wanted the town to be proactive about what occurs on this land by hiring consultants to determine what would be financially feasible for prospective developers. Their intention is to arrive at a plan that satisfies these objectives and then to entitle the land through a rezoning.

But will this plan meet the council’s objectives?

As the council has learned more about these properties, they’ve discovered real physical constraints that must be respected, such as a mandatory 100-foot buffer from I-40, protections for wetlands and streams, transmission lines bisecting the properties and even an existing OWASA gravity sewer line that would need to be moved.

The latest plan does not respect these natural constraints and would require exemptions from our ordinances. Further, it’s bad policy for the town to advocate and support housing close to a highway where noise and particulate matter cause real health impacts. We don’t want our town council getting behind a plan that does not meet our ordinances and is unhealthy for residents.

As these constraints have become more obvious, Dwight Bassett, the economic development director for the town in charge of the project, has felt compelled to ask the council to approve a plan that would require higher and denser buildings. At the last council discussion, he said the current proposed plan did not provide enough units and square feet to justify the $9 million of infrastructure costs that are supposed to be borne by developers.

He reported market studies indicate less demand for office space and new hotel rooms since the earlier plan was drawn up. Projected office space was reduced from 60,000 square feet to 38,500 square feet. A proposed new hotel might well need to be replaced with additional high-end apartments, so more buildings and height would be required.

In this most recent plan, buildings are proposed for areas likely to be designated wetlands and under transmission lines. Additionally, the mix of buildings has changed from largely owner-occupied townhouses and condominiums to almost entirely market-rate apartments. The number of town homes/condominiums was reduced from 220 to 58 while the number Class A apartments was increased to 720.

The goals the council set for this project seem to have been lost:

Our final question is: Why would the council invest any further town resources — consultant fees and staff time — in a project with escalating infrastructure costs, unhealthy buildings shoved up against I-40 and no meaningful help for our manufactured home residents?

This proposed plan is coming full circle and is starting to resemble the very plans the council said it did not want. Gordon Whitaker taught public administration at UNC’s School of Government for nearly 40 years. He wrote Local Government in North Carolina, among other books and articles on civic engagement, civic education and public management and service delivery.

Helping Our Schools in a Time of Need