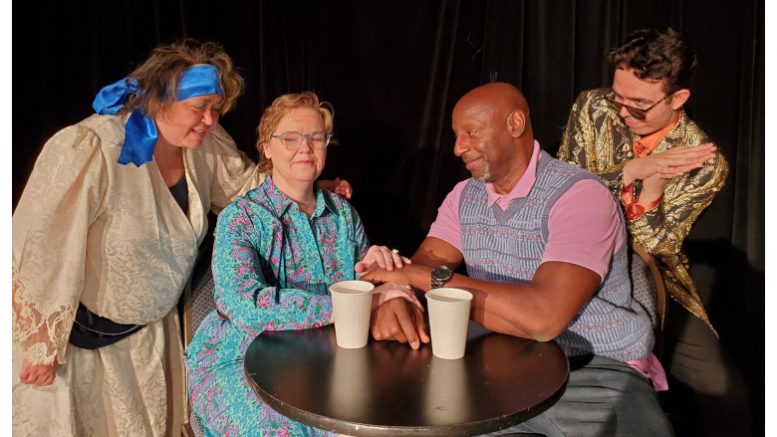 (L to R) God (Jean Wentz) looks down on Doris (Maria Piskor) and her husband Henry (Gerald Campbell) while Devil (Gus Vieweg) pines to bring the couple to Hell in the Odyssey Stage performance of "When God and the Devil Had Lunch at the Valley Mall Food Court." Photo by Charles Machalicky.

At a time when every day feels like a battle, community theatre may not be at the top of your list of mood-boosters; but Odyssey Stage’s lineup for this year’s NC 10by10 Festival is a must-see.

10by10 sets out to put on a thought-provoking and stimulating evening of theatre, and the ten bite-sized pieces selected for this year’s festival certainly didn’t disappoint. Over 100 submissions were narrowed down to the ten plays put on by a cast of 10 actors from open auditions.

Society falls under a magnifying glass in the collection of ten-minute plays, which tell the stories of our lives. From aging parents, late-stage capitalism, natural disasters and, of course, the thing still on everyone’s minds: the pandemic; the humor and lightheartedness that comes with young love, the absurdity of conspiracy theorists, and the nonsense of things we can’t understand.

“This is what people are writing about,” producer Charles Machalicky says.

Starting off light with “Little Timmy Fell Down the Well Again,” the audience is thrown into a story that is delightfully meta, touching upon themes of cyclical self-isolation, perhaps a nod to the never-ending quarantine. “Digging Out” gives two generations’ take on life and loss, encouraging audiences to remember that “snow melts and flood waters subside.” “Game of Chance” is a tense change of pace, highlighting how everything can change at the drop of a hat. “Old Man” plays on the heartstrings of adult children trying to take on the role of caregiver to their aging parents and “The Damned” cleverly takes the seriousness of small-town ignorance in the face of natural disasters exacerbated by climate change and turns it on its head with a hilarious ending.

After a short, 15-minute intermission, “Neighbors” conjures laughs from themes of suspicion of newcomers in a community, where Travis Walsh and Evit Emerson have a chemistry similar to “Key & Peele.” Gale Riggs shines in their role as Nelgath trying to understand a cumbersome, bureaucratic world in “Legendary Battle,” very boldly naming capitalism as a social ill. “The Wilderness Needs Your Attention” is compelling: wherein mask-wearing Dani Coan and Gus Vieweg conclude that “it might be evil to bring a child into the world,” that is, a world in which all eligible young adults of reproductive age are preoccupied by the bubonic plague and something called “the milk sickness.” Perhaps most intense is a shouting match between mother and daughter in “Daughter in the Basement” over the validity of faith and the meaning of motherhood, and the show wraps up with an optimistic outlook on life when God and Satan play “a game” in “When God and the Devil Had Lunch at the Valley Mall Food Court.”

“There are parables in ‘The Wilderness Needs Your Whole Attention’ and ‘Legendary Battle,’ which are a nice break from other pieces, like ‘Old Man,” Machalicky said.

The fast pace of a ten-minute play rightly challenges each cast member, who often switch between being whimsical and goofy in one piece to tense and serious in the next.

“I’m usually a comedic actor,” said actress and filmmaker Debbie Vu, “but I just tried a bunch of new things and the crowd responded to it and it ended up working really well.”

Vu says she connects to the characters she played: Maxine Winters, who has devoted her life to pursuing an Oscar-winning role; and Ann, who struggles to take care of her resistant yet aging father.

“Both of these characters and their stories are my future; they’re people I completely relate to.”

Though the house wasn’t packed at Carrboro’s ArtsCenter on opening night this past Friday, an enthusiastic crowd proved they were chomping at the bit to get back to community theatre.

Speaking after the show, Vu said she felt great about her first 10by10 performance.
“Everyone was clapping so loud, I had no idea we weren’t packed,” she said.

For actor Gus Vieweg, drawing audience members in was easy with such an energetic audience. “I can’t see anything when I’m up there; the audience was so lively and vivacious that I just tried to ride those laughs and hit those emotions,” he said.

Last year’s show was fully virtual. While many of us remain behind screens, the moderately-attended show was a rare instance of intimate connection in a room full of strangers.

“It’s what all the big boys are doing,” he said, referring to other theatre companies.

Odyssey Stage’s mission is to put on shows that illuminate the human condition, and 10by10 sources pieces written by talented and seasoned playwrights from all over the state.

Bill Cissna, writer of “Game of Chance,” says that short plays are a popular medium now.

“Once you start writing, you see how much fun they are; it’s a whole different discipline,” he says.

“The good thing is if you didn’t like one play, there’s a new one 10 minutes later!”

There’s a lot to learn from the plays in this year’s 10by10 Festival, and after attending, you may find yourself returning for years to come.

Odyssey Stage is committed to engaging with the community and is offering audience members a Q&A session after the show on Sunday the 19th. They will also be offering discounted $10 tickets for a special “Throwback Thursday” on the 23rd. 2021 NC 10by10 Festival is held at the Carrboro ArtsCenter and virtually. Masks are required in the ArtsCenter and seats are fully sanitized between showings.