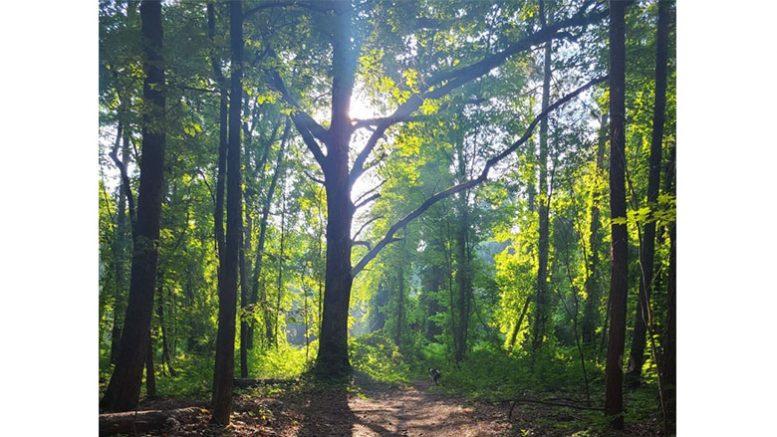 During our current Chapel Hill election season, the sale of public lands to developers and the increasing threats to our parks and public open space have been major issues. Calls to finally create a park in eastern Chapel Hill at Legion Road have become more numerous and Town officials even reversed course – at least temporarily – after a huge public outcry over a plan to cut acres of Town-owned hardwood forest along Booker Creek. The fate of Chapel Hill’s largest public forest, the 164-acre Greene Tract, also figured prominently in campaign discussions and debates.

The heightened attention to the issue of the sale of public lands seems to have caused concern to Orange County and Town officials, who just a few days ago announced an “open house” to discuss the future development of the Greene Tract Forest mere days after the election on November 7. This abrupt announcement ensures little time for the public to prepare to attend such a pivotal meeting and ensures any newly elected town council members will not yet be seated when the council takes action on the matter — which may occur as soon as Nov. 10 – even though the fate of our public lands was such a salient issue in the election.

While this may be portrayed by the officials rushing to sell our most beautiful public forest as a battle between affordable housing and preserving our woods and trails, it is really about the sale of our most beautiful public lands to private developers to build market rate apartments and other housing. Chapel Hill is currently in the midst of the largest building boom in its history with over 30 large development projects in the pipeline and many more expected soon. Giant luxury apartment buildings have become a huge flashpoint in town politics while making enormous amounts of money for their developers. Now Chapel Hill officials want to throw the Greene Tract Forest into this mix, selling off huge parts of the forest to private developers to achieve a modest goal – to build a paltry amount of affordable housing. In fact, under law, Chapel Hill can sell the entire public Forest to a private developer if as few as 20% of units in the complex are deemed “affordable.”  What a windfall for some lucky corporation doing business with Town officials!

As someone who values balance and diversity, I’m happy to see a wide spectrum of affordable homes being built including ones we are building on town-owned land. These include Weavers Grove, 2200 Homestead Road, Trinity Court and Greenfield Place on Legion Road. But I also know the risk that our community faces by ranking dead last among our neighbors for percent of town area designated for parks. We have developed our way into a corner — even land purchased over the years with open space preservation bonds approved by Chapel Hill voters is now scheduled for development by the Town. We’ve been blissfully, if not purposefully, ignoring the fact that most of our borrowed greenspace, UNC’s Carolina North Forest, will eventually disappear as the university develops it into a satellite campus. When that happens, Chapel Hill will be permanently relegated to a town with inadequate parkland. Without more parks and more preserved public land to balance our increasing density we will become a sea of apartment buildings with no escape – especially for those without cars.

I was looking forward to spirited discussion after the election among a cohort of new talented and dedicated town council members who could lead us towards a better and more balanced future. This is why I was so shocked to see an announcement of a meeting on Sunday, November 7th to discuss the fate of the Greene Tract Forest, a meeting that will take place even before newly elected council members, many of whom campaigned on the issue of what to do with our public natural areas, are seated.

When several of the current elected officials first assumed office in December 2015, they were surprised to discover that in the immediately preceding weeks, before the newly elected officials were seated, their predecessors secretly forfeited the opportunity to acquire the American Legion property for a park. Fortunately, the new council was able to reverse that decision. Now that those same officials are the incumbents, is history repeating itself?

Our elected officials have a long track record of finding ways to ignore their constituents but this seems a new low. In past years our elected officials chartered and then ignored countless task forces (including those that formulated plans for the Legion Park and Greene Tract Forest). When that wasn’t enough, they moved on to ignoring their community advisory boards, and now they are looking to ignore an entire election. Where is the harm in waiting until January, when a new council is seated and the public can be given adequate notice of such a pivotal meeting?

Regardless of where you stand on the fate of the Greene Tract Forest, Legion Park, or the forest around Booker Creek, our elected officials owe it to us to let the people’s voice, as expressed through elections, be heard.

Chapel Hill resident Abel Hastings is a parent of two, an outdoor enthusiast, volunteer coach with the Smith Middle School mountain bike program, and co-founder of the Friends of the Greene Tract Forest.

Be the first to comment on "On the Future of the Greene Forest, Let the People’s Voice Be Heard"