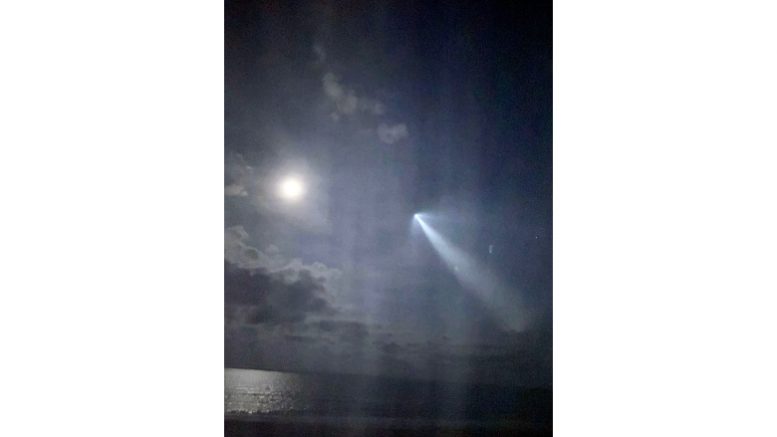 With the safe return Saturday night of the SpaceX Dragon spacecraft and flight crew of four civilians, I feel good about releasing this extraordinary image, taken at 8:08 p.m. Wednesday night —exactly six minutes after the rocket’s launch from the Kennedy Space Center in Florida.

Similarly, it gives this old professor of photojournalism great joy to celebrate the work of someone else, our dear friend Pam Winton of Durham/Chapel Hill, N.C., who made this jaw-dropper.

Here’s the backstory: On the evening of Weds., Sept 15, not long after moonrise, Pam, 74, told me she was doing yoga out on the upper deck of the family’s ocean-front getaway at Emerald Isle, N.C., with its southeast-facing view of the ocean, when she was startled by this amazing sight in the sky.

Growing up in Jacksonville, Fla., she had been afforded views of several of NASA’s launches from Cape Canaveral, so Pam said she realized what she was seeing. A retired senior scientist at the Frank Porter Graham Child Development Institute at UNC-Chapel Hill, Pam told me she made the shot with her iPhone, while hollering at her husband, Bob, to come out and experience the once-in-a-lifetime spectacle — The Dragon craft streaking like a dart across the night sky with a three-quarter moon dappling the Atlantic below.

But maybe it’s not a once-in-a-lifetime sight; maybe with the success of the SpaceX, more such commercial space flights — and therefore more such celestial sights — will someday become more commonplace.

But for now, her photo is a stunner.

Thanks, Pam, for sharing.