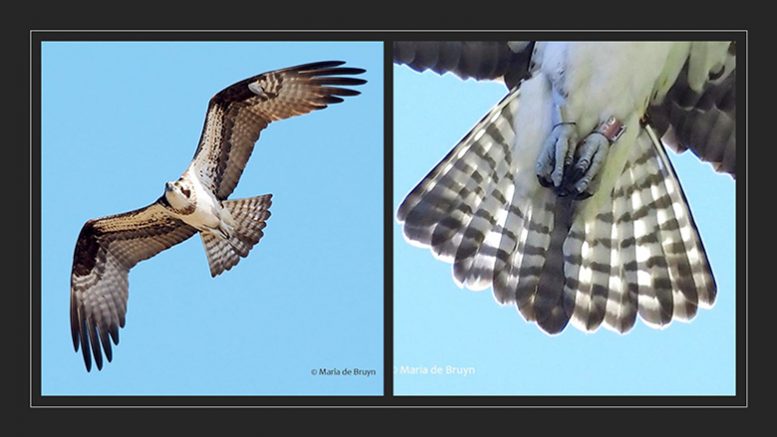 Not only the emerging daffodils, crocuses, irises, camellias and hellebore flowers are announcing that spring has arrived. The birds returning from their wintering migration grounds are also making us aware that the seasons are changing.

Some bird species who spend the winters here are still around, but the very first warblers who pass through the Piedmont region to go further up North have been spotted, too. Local birders have also been admiring the larger birds who are early breeders in our area, including the red-shouldered and red-tailed hawks.

The hawks who get me really excited are the beautiful ospreys. Many of them leave the U.S. in the autumn to spend the winter in Central and South America, some flying almost 3,000 miles to reach Venezuela and Suriname. Soaring with Fidel, a wonderful book by David Gessner (chair of the Department of Creative Writing at UNC-Wilmington), describes the roundtrip undertaken by some of these marvelous birds. Some of the birds are banded so scientists can attempt to follow their travels; I was lucky enough to see a banded osprey quite recently (see photo above). When hunting, the ospreys circle bodies of water for long periods of time, sometimes hovering and staring down intently before plunging down steeply to grab fish, which compose up to 99 percent of their diet. They fly gracefully, sometimes calling to one another as they soar over the water.

If the snagged prey is large, they may struggle a bit to arise again from the water, but they usually manage as they are successful fishers, averaging a catch for every four or so attempts.

Their prowess is well known to the other raptor species who share their territory. It’s not uncommon to see bald eagles soaring overhead where osprey are fishing so that they can try to steal their prey in midair. The eagles apparently find this easier than expending energy on catching their own fish. I always root for the osprey and am very pleased when they manage to hang on to their hard-won meals.

If you would like to see these wonderful birds in action, a good place to see them in the spring is at the tailrace area of the Jordan Lake Dam in Moncure (about 45 minutes from Chapel Hill). Often, you will see not only osprey but also eagles, double-crested cormorants, great blue herons, gulls and crows fishing there. There is also a playground for young children and walking trails through woods bordering the nearby visitors’ center.

Be the first to comment on "Ospreys – Returning Harbingers of Spring"