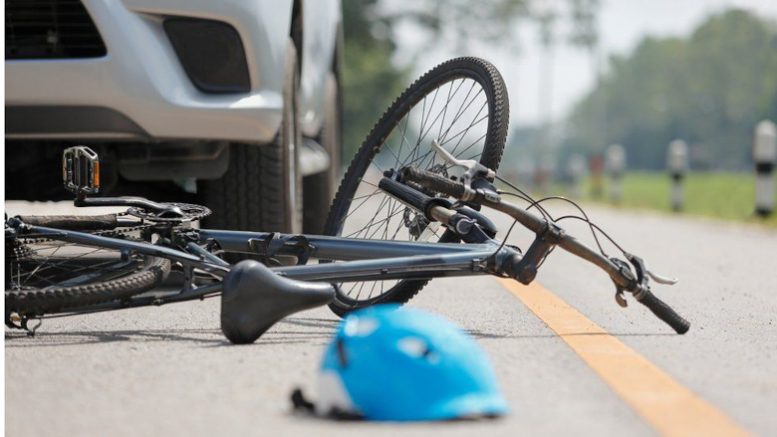 It’s illegal in North Carolina to have sex in a motel room if you’re not married. It’s also illegal to hold an organizational meeting while wearing a mask. Outdated laws like these often strike us as amusing relics of a bygone era. But other outdated laws still have bite and are anything but funny. North Carolina’s contributory negligence law is a prime example.

This law has acute bearing on cyclists, for reasons I’ll explain. But anyone in North Carolina who might seek recovery for harms caused by the negligent act of another person has reason to be concerned. Reason, too, to want the law changed.

Here’s how the law works.

Imagine a law-abiding cyclist riding in a bike lane. At one point, the cyclist shifts left, out of the bike lane, to avoid a patch of glass, looking first to make sure there is room to do so safely. A driver approaching from behind, distracted by a phone conversation, drifts to the right and hits the cyclist, causing serious injury.

The accident is clearly the driver’s fault, so it would seem that the cyclist should be able to sue and recover for damages.

But if the driver’s attorney is able to convince a jury that the cyclist was even 1% at fault for being out of the bike lane, the cyclist would get nothing. Under the doctrine of contributory negligence, if an injured plaintiff is held to have in any measure contributed to causing the harm incurred, the defendant — no matter how much greater his or her fault — is off the hook.

Most states, recognizing the unfairness of contributory negligence, have long since done away with it. The doctrine survives as law only in Alabama, Maryland, Virginia, North Carolina, and the District of Columbia. Most jurisdictions in the U.S. now use a comparative negligence standard.

Most legal scholars agree that contributory negligence should be scrapped. As far back as 1932, faculty in the law school at UNC-Chapel Hill criticized the “harsh common law rule of contributory negligence” and urged the legislature to adopt a comparative fault standard. In the late 1980s early 1990s, the News & Observer, the Winston-Salem Journal, the Durham Herald-Sun, and the Chapel Hill Herald all editorialized in favor of comparative fault.

But repeated efforts to abolish contributory negligence have failed in the General Assembly. The most recent attempt occurred in 2021, with introduction of the Victims’ Fair Treatment Act (SB477), co-sponsored by state senators Danny Britt, Jim Perry, Amy Galey, and Vickie Sawyer. The bill failed to make it out of the Rules and Operations Committee, and for now seems dead.

Opposition to SB477 came mainly from the NC Chamber, the Insurance Federation of North Carolina, and the North Carolina Association of Defense Attorneys.

The NC Chamber claims that comparative negligence would drive up insurance costs and hurt small businesses, despite the fact that small businesses thrive in the 46 states that have used comparative fault for decades. Opposition from insurers presumably is based on fear of lost profits if damage payouts go up because bad drivers are held accountable in proportion to their fault. Many defense attorneys want to keep contributory negligence because it makes it easier for them to win cases.

The contributory negligence law affects anyone who might be injured by another party’s negligence and seeks recovery for damages. But cyclists are especially vulnerable to injustice under this law. The problem for cyclists stems in part from anti-cycling bias in a culture of transportation that prioritizes motor vehicles.

Ann Groninger, an attorney, cyclist, and frequent blogger about contributory negligence, explained how the law affects cyclists disproportionately. “If you talk to jurors or focus groups, you find that people will assume a bicyclist must have some fault by virtue of the fact that they’re riding a bike.” That bit of fault, real or imagined, is all it takes under the contributory negligence doctrine to shield bad drivers from accountability when they injure a cyclist.

For Groninger, the problem is not hypothetical. Every year, she turns away potential clients who have been hurt by unsafe drivers but have almost no chance of recovery because of the contributory negligence law. “Maybe the driver is 80% at fault and the cyclist is 20% at fault, but we can’t help because we can’t overcome that 20% in court,” she said.

Prospects for legislative relief from the contributory negligence doctrine seem slim right now. Yet Groninger remains optimistic. “I think there is a general recognition among legislators and among the community that this is a stupid, unfair law that needs to go away,” she said. “I think that eventually we’ll do the right thing,” she added, “and bring North Carolina into this century.” Anyone who cares about fairness in our legal system should urge legislators to pedal harder on this issue and make that change happen.

A Shot in the Arm for UNC Health