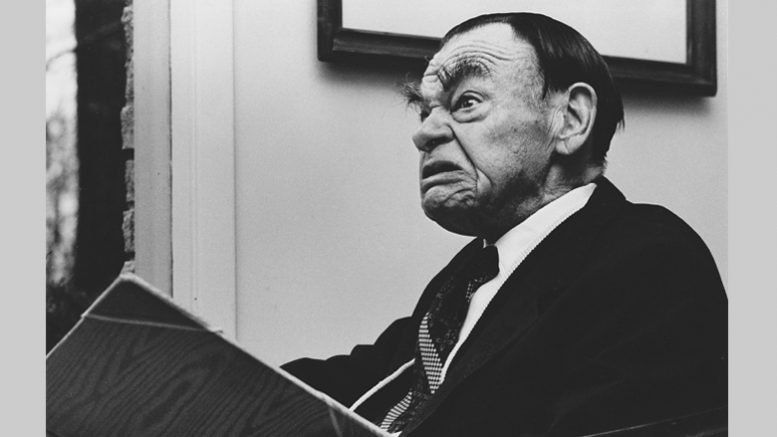 Before the Grinch, there was Scrooge. And if ever a man could play Charles Dickens’ Christmas curmudgeon to the hilt, it was the late great Earl Wynn, a distinguished professor credited with creating in 1954 the department of Radio, Television and Motion Pictures at UNC-CH, which merged in 1993 with the School of Journalism and Media.

A holiday tradition for at least two decades, from the ‘60s into the mid-‘80s, Wynn’s dramatic reading of the Christmastime classic delighted Hill Hall audiences with his basso-profundo voice and dynamic performances. In my Chapel Hill News photo from 1984, Wynn as Scrooge lambastes his good nephew, Fred, with the scathing rant:

“If I could work my will … every idiot who goes about with ‘Merry Christmas’ on his lips, should be boiled with his own pudding, and buried with a stake of holly through his heart … Bah! Humbug!”

The century-old legacy of the local reading of Dickens’ “A Christmas Carol” goes back to 1918 when Carolina Playmakers’ founder Prof. Fredrick Koch brought tradition with him from the University of North Dakota. Earl Wynn followed in the footsteps of “Proff Koch.”

As an undergraduate at UNC in the winter of 1966 and just before Christmas break, I was fortunate enough to be in attendance at one of Wynn’s unforgettable recitations. And I wasn’t the only young Tar Heel in attendance.

A peer named Tony Lentz, hearing the performance, was so moved that when he later became a professor at Penn State, he took the show with him. This connection I discovered through the delightful coincidence of my own career trajectory, which, in the early ‘90s, landed me in Happy Valley, where it wasn’t Christmas unless you attended one of Tony’s performances. Lentz performed his annual reading of “A Christmas Carol” at Penn State for 40 years, giving his final recitation in 2017, which he dedicated to Earl Wynn. Bravo, Tony!

Back to the present: In this pandemic-plagued Christmas season, when “we need a little Christmas” the most, the classic tale will ring out again.

Beginning Dec. 14, PlayMakers Repertory Company is offering an old school “audio drama” version of “A Christmas Carol.” From their website: “We’re making something old new again as we present ‘A Christmas Carol’ in the radio-drama style of yesteryear. Curl up with the whole family for an intimate evening of storytelling with PlayMakers legend Ray Dooley (who) embodies Scrooge, Marley, Tiny Tim and a lifetime of Christmas memories in Dickens’ classic tale of redemption, charity, and love. This ‘radio drama’-style production is sure to offer you something new and exciting.”

The streaming audio-on-demand production runs from Dec. 14-27. For information and ticket sales: https://tickets.playmakersrep.org/13034

Be the first to comment on "Over 100 years of Humbugging"