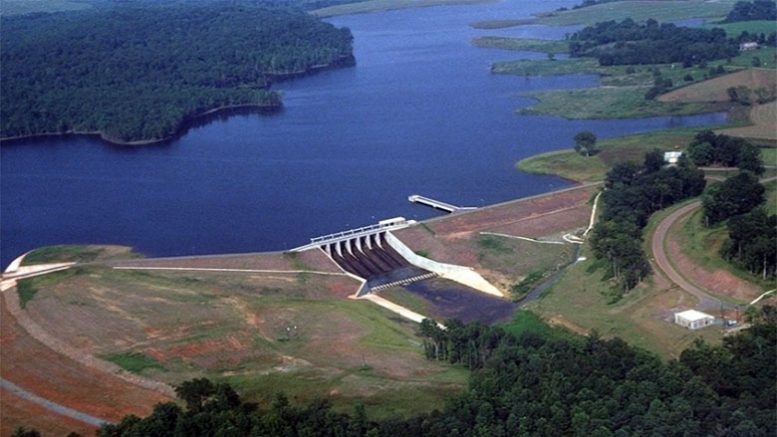 The board of directors for the Orange Water and Sewer Authority took aim at a long-range planning project Wednesday evening that has been decades in the making.

A staff report on alternatives to securing potable water from Jordan Lake dominated the meeting. The inquiry is part of the Long-Range Water Supply Plan (LRWSP) which aims to ensure the community’s water supply demands are met over the next 50 years.

The board is not expected to adopt a course of action until next year; OWASA provides water and sewer utility services to residents of Chapel Hill and Carrboro.

Ruth Rouse, OWASA’s Planning and Development Manager, explained the overall risk of the public utility running out of water in its service district is relatively low. OWASA currently pulls water from three sources: the Cane Creek Reservoir, University Lake and the Quarry Reservoir. There are also mutual aid agreements in place that give OWASA the option of purchasing treated water from Jordan Lake at the existing intake shared between Apex and Cary.

In addition to those main sources, OWASA purchased an allocation of water from Jordan Lake in the late 1980s, along with a tract of land along the lake that is considered prime real estate for a water treatment plant along the body of water.

OWASA staff recommended the board compare current mutual aid agreements to Alternative 7, a hybrid plan they say will provide adequate water both during drought conditions and as the population increases.

The second phase of the plan would require the construction of the intake facility and pipe infrastructure to enable OWASA to access the water from the WIP. Chapel Hill board appointee Kevin Leibel asked whether the fact that OWASA owns the land on which the intake facility would be built gives the board any leverage in negotiating an agreement, and whether the value of the land has been appraised.

Rouse responded that the land has been evaluated and the appraised cost has been removed from the equation because the board has the power to ultimately decide how it is used. It also has the right to sell the land to the WIP.

OWASA Executive Director Todd Taylor also pointed out that owning the land doesn’t tie the board to a specific course of action.

“I don’t know if the land itself is a factor of determining [which] of these options is the best” he said. “We are holding a big chip there and we can use it in a number of different ways, but as far as using it in this evaluation it doesn’t really change the outcome.”

Board Secretary John Morris said it’s important to use the land in a way that serves OWASA’s interest.

“The value of [the land] is the value of a large tract that’s big enough for a treatment plant and it is in the right place on the map,” he said. “It is a tremendously valuable asset that OWASA obtained that’s good for the region and good for water intake security.”

Bruce Boehm, another Chapel Hill appointee, said earlier in the meeting he opposed ending partnership agreements until more comparative cost figures are available. He also asked why vulnerability to extended drought remains a possibility under Alternative 7.

Rouse responded that until OWASA becomes a full partner in the WIP, it will still be limited to obtaining water from Jordan Lake under certain specified conditions.

Morris went on to say that OWASA needs to accomplish two things over the long haul: it first needs to show it is committed to retaining its Jordan Lake allocation by “buying into the physical system that’s going to provide us water,” i.e., the new intake facility.

The second requirement, according to Morris, is to ensure access to adequate water over the next 30 years, until such time as OWASA becomes a full partner with the WIP in 2050. He noted that in 2031, when an intake facility on the western side of Jordan Lake begins operating, the City of Durham and Chatham County plan to switch to that intake as their primary source of water, and not use Cary’s and Apex’s intake option.

“In 2031, there’s a lot of new water freed up that could be available to OWASA in an emergency,” he said. “So our chances of being able to buy water during a drought or during periods of need using our Jordan Lake water through the Cary/Apex system are much greater in this period between 2031 and 2050 because the load on that system [will have] been [greatly] lightened.”

Boehm asked whether it might be more viable to just pursue a full partnership with WIP from the outset instead of an option contract. Rouse countered that Alternative 7 was proposed as a way to cover the marginal costs of intake and infrastructure expansion. She also said OWASA can always walk away from the agreement.

“We can always fall back on our mutual aid agreements and we can get mutual aid from Cary,” she said.

“The mutual aid agreement works when water is available,” Boehm retorted. “The problem [arises when] we have to do this analysis when everyone’s in a drought situation… That’s when we absolutely need water but everyone else [also] needs it. When everyone else needs the water and everyone’s in a drought situation the mutual aid agreement isn’t going to do us any good.”

Rouse said she agreed with that assessment in the near-term, but that it is less of a concern after 2031 since, as Morris noted, more water will be available at that time.

Taylor proposed that, at the board’s next meeting, staff present a comparison of the optimal partner agreement option with WIP—i.e., becoming a full partner now instead of waiting until 2050—against Alternative 7 to provide further clarity for the board. Morris added it is time for a water quality assessment.

“We need to have some real comparative water quality information in our agenda packet,” he said. “Given all the concerns are based on outdated information, I think we need to officially satisfy ourselves that the quality is absolutely acceptable at Jordan Lake and we need to show the public that we were looking at real data to do that.”

The OWASA board next meets Jan. 13.

Editor’s note: This article has been updated to clarify that board member Boehm said he opposed ending partnership agreements — not mutual-aid agreements — until more comparative cost figures are available.

The Meadow in the Middle: What Will Become of Carrboro’s Largest Remaining Natural Area?