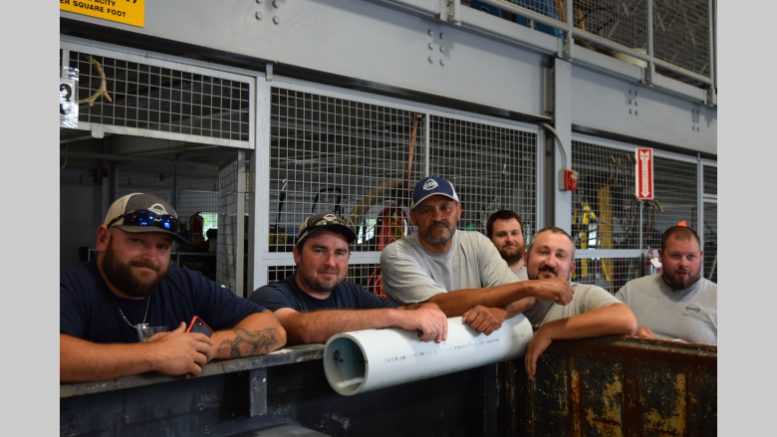 Sherman Betts, center, retired in May after a 36-year career with OWASA. The utility’s board honored him at a recent meeting. Contributed photo.

The OWASA Board of Directors recently honored longtime OWASA Team member Sherman Betts for his years of service to OWASA and the Carrboro-Chapel Hill-Orange County community ahead of his retirement at the end of May.

The words “dependable” and “leader” were used by those who knew him best to described Betts’ decades of service at OWASA. Known for being the first one to report to the OWASA Operations Center to start the day, Betts has left a lasting impact on OWASA and the community.

Betts moved to Chapel Hill from Chatham County in 1984 and found his way to OWASA after working in the maintenance department for a local apartment complex. He said that he talked with some OWASA personnel responding to an issue in the field and decided it was a place he wanted to work. He started on OWASA’s construction crew and has worked in every facet of OWASA’s operations department over the years, eventually working his way to a Crew Leader position in charge of OWASA’s easements. He took that role just before Hurricane Fran ripped through the community.

“Bad timing but good timing,” is how Betts put it. He was now in charge of clearing and maintaining easements, and every OWASA easement needed significant time and attention after the devastating storm.

There have been many changes over the years that Betts has been working at OWASA. He was there in the early days of the organization, using equipment that was passed down after OWASA began operations in 1977. Over the years, there has been new equipment and facilities, advancements in technology, and the community OWASA serves has grown. Betts has been one of the constants at OWASA and the community throughout the decades.

Betts was always quick to share his knowledge and help others grow in the organization. His efforts over the decades have been a tremendous benefit to OWASA and the community.

He said he intends to stay in the area in his retirement and focus more on his power-washing business. OWASA thanks Betts for all of his work over the years and wishes him well in his retirement.

Blake Hodge is the communications specialist at OWASA.

Be the first to comment on "OWASA Honors Longtime Crew Leader"