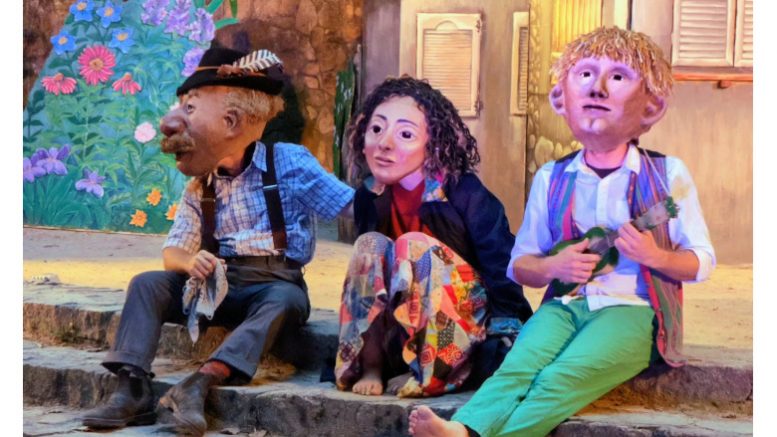 In August and September, the historic Forest Theatre (open-air amphitheater) in Chapel Hill has played host to the beloved giant puppet show put on for 22 years by Paperhand Puppet Intervention (PPI).

This year’s show is called “The Meanwhile Clock and other Impossible Dances” and it has everything: stilts, playing a famous movie tune on a saw, a dizzying quick-change sequence done giant-puppet-style, illuminated peace lilies and shadow puppets.

Everything—in addition to the giant puppets, that is.

The entire score for the show is a series of original compositions with a full live band, with band members’ singing and speaking voices throughout, as well as foley (everyday sound effects).

Led by co-founders and directors Donovan Zimmerman and Jan Burger, PPI’s new show “is our attempt to dip a toe into the vast and paradoxical theme of time,” wrote Zimmerman in an email to The Local Reporter.

“We were inspired by the story of ‘Momo’ by Michael Ende as a starting point,” Zimmerman explained. “There are somewhat dubious characters in the story called the ‘men in gray’ that, like most capitalist corporations, steal from the future in order to live a larger today. This creates a deficit for our very survival that we feel we must address. We also drew from ‘Bloodtide’ by Eli Nixon, which proposes celebrating new holidays that center [on] amazing creatures like horseshoe crabs.”

As the giant tortoise Cassiopeia sings when it enters the stage, the simple message is: slow down; take your time. And care for the present, so that we can have a future.

The following photos and videos and their captions reveal a little more—but not all. “The Meanwhile Clock” has performances at the Forest Theatre at 123 South Boundary Street on September 16, 17 and 18 at 7 p.m., with a matinee on the 18th at 3 p.m. (Click the link for information and tickets.)

For its final weekend of shows, Paperhand will perform in Raleigh at the North Carolina Museum of Art on September 23, 24 and 25 at 7 p.m. The museum is located at 2110 Blue Ridge Road.

Scenes from “The Meanwhile Clock”

All photos, videos and photo collages by Pamir Kiciman. Momo, the childlike central character, who has the incredible gift of listening and turning one of the Men in Gray (MIGs) into a lover of slow time. (Abby Palen, puppeteer/Claudia Lopez, voice.) Time Savings Bank eating all the flowers, three Men in Gray and one of two giant Men in Gray, who are the bank’s agents. (The large MIGs have cityscapes on their backs.) Characterized by big cigars and hats and accompanied by swanky R&B from the band, these are the guys everyone boos. (MIG puppeteers: Donovan Zimmerman, Jan Burger, Kelly Washatka. Giant MIG puppeteers: Gretchen Adracie and Tyler Benjamin.) Beppo, the street sweeper, is another main character—and quite the character he is! (Johnny Wargo, puppeteer/Daniel Chambo, voice). Top Photo: PPI’s live seven-piece band. Front row (left), from front to back: Victoria Nelson, Robert Cantrell, Joe MacPhail and Daniel Chambo. Back row (right), from front to back: Ittai Korman, Paula Peroutka and Claudia Lopez. Bottom photos: Charles Jones (center), who live-mixes the sound at every performance (center), is flanked by photos of the band and audience (left) and a long view of the band (right). Beppo (Johnny Wargo) plays a classic from the Wizard of Oz on a saw. Can you guess the song? Momo reacts in amazement. Illuminated peace lilies are hoisted and carried by main characters. Later, they will all go up the stone steps to the top of the theater, stopping with the audience for high fives, bending the lights down to the children and hugging audience members.

Pageantry around the Triple Goddess.

Mr. Kiciman has a working relationship with Paperhand Puppet Intervention for which he receives compensation. The editor’s decision to assign this story to Mr. Kiciman was made independent of that relationship, instead focusing on Mr. Kiciman’s abilities as a photojournalist and his regular coverage of arts and culture for The Local Reporter.

Correction: On Jan. 12, 2023, this article was updated to reflect that Sophia Joy was the third puppeteer for the opening red knots dance instead of another puppeteer named. ‘A Little Lower than God’ and ‘Crowned with Glory and Honor’