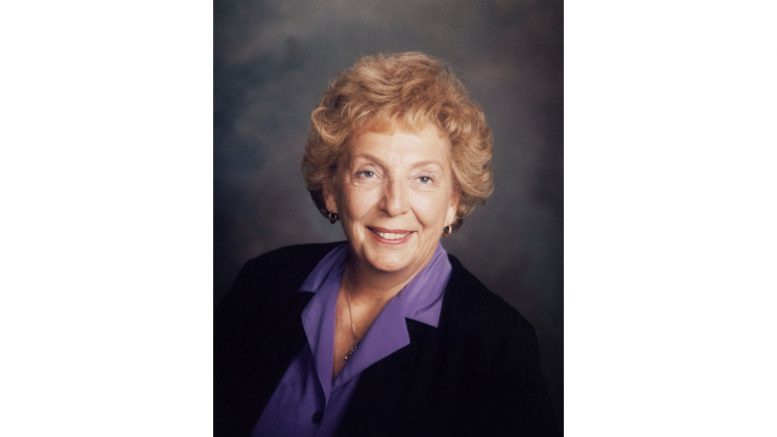 Patricia (Trish) Stanford Love, 93, passed away from advanced age at her home on September 14, 2021. Hers was a lifetime of encouragement to her sons and service to her community and her state.

She earned three degrees from Carolina: a BA in Journalism (1950), an MA in American History (1966), and a JD in Law (1978). As an undergraduate, she was elected head of the Women’s Student Government Association, and inducted into Phi Beta Kappa and the Order of the Valkyries. A member of Alpha Delta Pi sorority, she later served as its longtime chapter advisor. In 2000, UNC honored her with its Distinguished Alumna Award.

She was a teacher and guidance counselor in the Chapel Hill-Carrboro public schools for many years. Many former students have shared memories of the positive influence she was in their lives. She was twice named teacher of the year and headed the local classroom teachers association. In 1970, she co-authored North Carolina History, Geography and Government, a textbook adopted for use in all NC 7th-grade classrooms.

In 1972, she was the first woman in Orange County elected to the NC House of Representatives. In 1978 and 1980, she was rated as the most effective woman legislator and one of the most influential members of the General Assembly overall. She was the first woman to chair a judiciary committee. She managed a revision of the entire NC juvenile code and was the chief sponsor of a new equitable distribution of marital property act. She was the major force behind the Equal Rights Amendment in the NC House where it passed 3 times.

In 1981, Trish became the first woman judge in Orange County, rising to chief district judge in 1989. She coordinated systematic changes designed to reduce domestic violence and to improve the collection of child support. She was the first woman to be elected president of the NC Association of District Court Judges.

She was an elder in University Presbyterian Church and active in the Democratic party. She enjoyed overseas travel, bridge club and annual family gatherings at Emerald Isle.

Florence Patricia Denning was born on June 9, 1928, in Erwin, NC. Parents Florence Hibbette Cooper and Lewis Knox Denning soon moved the family to Coral Gables, FL where she grew up with her younger sister, Elisabeth Madge. Trish graduated from Ponce de Leon High School in 1946, enrolled at Sweet Briar College for 2 years, then transferred to UNC.

In 1949, Trish married classmate Donald McIver Stanford, a Chapel Hill dairy farmer. Together they raised four sons until his untimely death in 1970. She was married to Thomas Montague Hunt from 1972 until his death in 1989 and to George Corpening Love, Jr. from 1992 until his death in 2008. Survivors are 4 sons and their wives: Donald, Jr. & Donna, Lewis (Randy) & Debbie, Ashley & Bobbie, and Jamie & Lyda; 7 grandchildren and 4 great-grandchildren.

The family thanks Trish’s entire caregiving team, especially Jeannie Gamble, her wonderful friend and companion of 4 years. A memorial service may be held later. Consider a contribution to one of Trish’s favorite charities, Doctors Without Borders (www.doctorswithoutborders.org), or Released Women’s Ministry (www.releasedwomensministry.org).