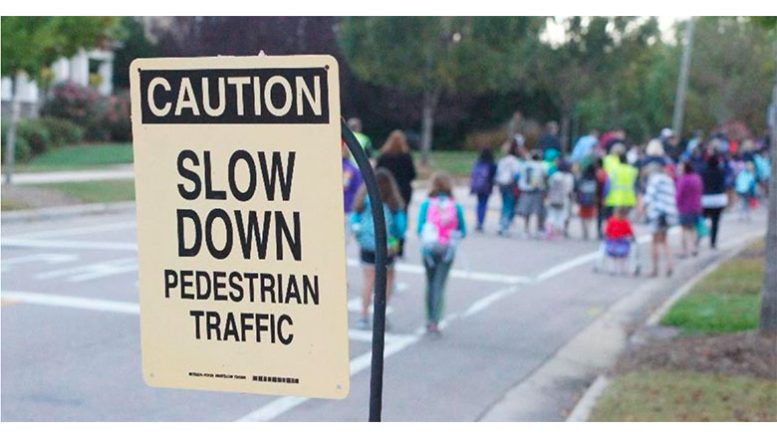 Courtesy of Town of Chapel Hill.

Improved crosswalks with flashing beacons and median islands are among the pedestrian safety measures soon to be added to Estes Drive in Chapel Hill, the site of two recent accidents in which pedestrians, notably children, were badly hurt. Area residents have marched in protest along the street to highlight the dangers to pedestrians and cyclists. Town officials say they are working with the state, which controls Estes Drive and many other major roads in Chapel Hill, on both near- and long-term safety improvements. Those assurances have done little to assuage the frustration of some residents, who note that petitions for better traffic control stretch back more than a decade.

Beyond those Carrasquillo noted, “our town’s Bike/Pedestrian Team is working with NCDOT to assess the environmental conditions in the area where the crash occurred to consider any safety improvements that could be warranted.”

More broadly, TLR sent to the town several recommendations that were made in the Central West Small Area Plan (CWSAP) prepared for the town in November 2013 and asked about the status of those. The town sent written replies from Bergen Watterson, transportation planning manager, with assistance from Mary Jane Nirdlinger, deputy town manager, and Colleen Willger, planning director.

The town officials note that “as development applications have come to the town council, the [CWSAP] report, along with other comprehensive plan guidance, informed negotiations about developer-provided improvements, those for Azalea Estates, the Whit Rummell property and the Aura development. We’ve also designed and are ready to begin construction on the Estes Drive multi-purpose trail, which is a significant improvement to the area and started design a few years after the Central West Plan was adopted.”

The CWSAP specifically cited Estes Drive for “perceived lack of safety, traffic congestion at peak hours and lack of basic bicycle and pedestrian amenities.” Its first recommendation was for the town to “work with the Chapel Hill-Carrboro City Schools, including parents, and administrators, to consider road crossing improvements at the intersection of the schools and Estes Drive.” In their written replies to TLR for this story, town officials noted that “improved crosswalks with flashing beacons and median refuge islands will be installed at Caswell and Somerest as part of the Estes Drive project. Town staff are working with North Carolina Department of Transportation [NCDOT] to procure rectangular rapid flashing beacons for the Caswell crosswalk to install as soon as possible. Additionally, the intersection of Martin Luther King Jr. Blvd and Estes will have crosswalks and pedestrian signals on all four legs.”

Town officials added that “a traffic circle has been explored at various times in the last seven to eight years. A traffic circle was evaluated as part of the Estes Bike-Ped project and the Aura project and was deemed infeasible due to its proximity to the MLK/Estes intersection. A traffic signal at Somerset is included in the conditions for the Aura project but is contingent on meeting warrants required by NCDOT.”

When the Town receives a request for a traffic signal, staff members review the context of the location. Whether the road is maintained by NCDOT or the town, the location of the traffic signal must meet the warrants outlined in the Manual for Uniform Traffic Control Devices. Those require certain volumes of vehicles and/or volumes of pedestrians. NCDOT, which maintains the majority of the streets where a traffic signal would be requested — Estes, Franklin, Weaver Dairy, MLK — is strict about meeting the warrants and will not allow installation without them.

Those protocols for traffic signals seem to have stalled a request that predates the CWSAP by four years. Area resident David Brown provided TLR with copies of email exchanges he had with town officials in 2009 regarding Phillips Middle School students crossing Estes Drive.

In February 2009 Brown wrote, “I’ve formalized my verbal request in this written request for consideration by your office [of] installation of a pedestrian-activated traffic signal in the 600 block of Estes Drive at the intersection of Estes Drive with Caswell Road, and the entrance to Guy B. Phillips Middle School.”

Brown noted, “traffic on Estes Drive is frequently heaviest during the evening hours 4:00 to 5:30 p.m. at a time when after-school clubs, sports and other extracurricular activities are ending and children are walking home. Due to a dip in Estes Drive to the east side of Phillips school and the juncture of Caswell Road and the school entrance it is difficult for drivers to easily observe the crossing. During times when the crossing guard is not on duty, or absent, it is difficult and dangerous for children to cross Estes Drive.”

Three months later, in May 2009, a town official wrote to Brown, “I apologize for [NC] DOT’s lack of response on this issue. I will give them 5 days to respond to our 3rd request and if we don’t hear something back I will get with my manager for another option. Thank you so much for your patience.”

In July and again in September 2009 Brown contacted the town seeking an update. Brown also contacted the police officer assigned to Phillips as school resource officer. That officer wrote to Brown, “Thanks for your concern. I agree a light at that location would increase safety dramatically. This issue has been raised in the past but, as evidenced by the continued lack of a light, has not been successful. I will make a couple calls and try to get some more direction (maybe some fresher perspective as we have had many personnel changes recently). I will say though, I have heard, ‘It’s a state issue.’”

Kevin Foy, mayor of Chapel Hill from 2001 to 2009 and now a professor of law at NC Central University, stressed the role of the state, and the importance of town and residents working with the state over the long term.

“When I was mayor, there were two major state roads in town that were slated to be made into four-lane divided highways,” Foy told TLR, “Weaver Dairy Road, which goes past Chapel Hill East High School, and South Columbia Street, from the hospitals to the James Taylor Bridge. And even though the term is ‘four lane’ they are usually really six or eight with all the turn lanes.

“That is not what residents wanted,” Foy continued. “The town’s position was that planning did not take into consideration the connectivity of the surrounding areas, the need for residents and students to cross the roads. It took complex negotiations, but NCDOT was willing to pause and listen, not just to town leadership but also to residents. There has to be communication. It was important that there were not just complaints, but also that the town and residents could be clear about what they wanted and why.”

Even then, Foy added, “traffic engineering problems are very different from a holistic view of how people live and work in an area. It can be difficult to balance those.”

As a case in point, the CWSAP and area residents have suggested several actions, including traffic calming measures and reducing speed limits. Town officials explained that “NCDOT generally does not allow traffic calming on its roads, especially those with speed limits greater than 25 mph. The addition of bike lanes, sidewalks/multi-use paths, and increased and safer crosswalks is expected to calm traffic by visually narrowing the road and giving drivers the perception that they should slow down.

“Lowering the speed on Estes Drive has come up over the years in the design process for the Estes Bike-Ped improvements and has not been approved. Staff will continue to bring it up again in light of the recent pedestrian crashes.”

There are new medium-density housing and retail developments planned around town, including on Estes, so traffic and pedestrian density will only increase. While each presents its own vehicle and pedestrian traffic challenge, town officials said that, in general, “every development that is expected to generate more than 500 daily trips must conduct a traffic impact analysis. That analysis produces recommendations for roadway improvements to mitigate increased vehicle trips as well as bike/ped safety recommendations. The town’s Mobility and Connectivity Plan includes bicycle and pedestrian projects throughout Town meant to improve access and safety, and these projects are usually included as conditions in development permits.”

Town officials added that “police and transportation planning [staff] work very closely together and determine locations to conduct crosswalks and speeding enforcement efforts; those are done multiple times a month. Transit evaluates its bus stops for safety improvements on a regular basis as well.”

Choose Wisely on AURA Proposal or Consign Us All to Gridlock