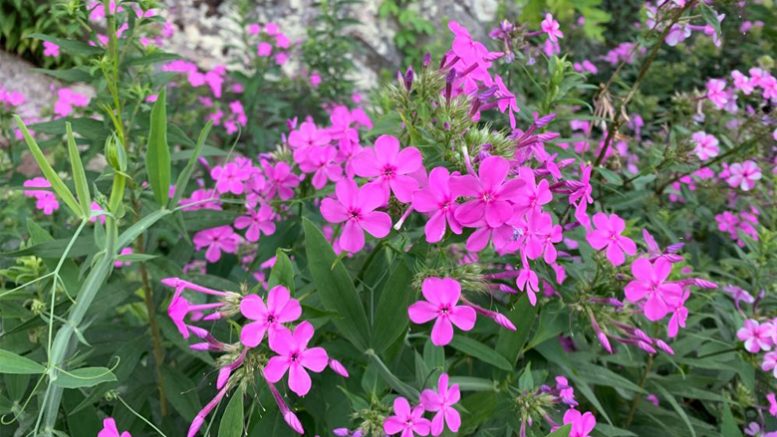 The genus phlox is comprised of approximately 60 species that are native to the U.S. Recently, the Mount Cuba Center in Delaware issued their report on which varieties fared the best in the mid-Atlantic region, a report that is pertinent to North Carolina residents.

I’m a huge fan of phlox paniculata, because most of the cultivars bloom in July while making few demands on the gardener. They are not the water hogs so many of our flowering plants are, they can withstand the hot summer sun, and they are magnets for butterflies, especially the eastern tiger swallowtail.

However, phlox is not a perfect genus, primarily because many of the cultivars are prone to powdery mildew, a fungus that loves warm, sunny days and cool nights, a condition found in the North Carolina Piedmont.

Therefore, it behooves all of us phlox growers to look over this report carefully to see which cultivars we should introduce into our gardens.

The most outstanding P. paniculata was “Jeana,” discovered in Tennessee. It proved to be totally resistant to powdery mildew, bloomed from mid-July through early September and was overwhelmingly the most attractive phlox to butterflies. While the individual flowers, known as “pips” were smaller than those of other cultivars, it still produced an abundance of flowers. For the other recommendations go to: https://mtcubacenter.org/research/trial-garden.

P. paniculata cultivars come in a variety of colors, some more subtle than others, but none are truly understated. They demand to be noticed and some are almost neon in their brazen colors (check out “Glamour Girl,” another highly recommended one). While most of these cultivars are tall — in the five-foot range — there are some that are considerably shorter.

The widely available “David” tops off around three feet in height. Named as “Perennial Plant of the Year” in 2002, “David” blooms earlier that most of the P. paniculata varieties — and this has caused a problem for me. To spruce it up after flowering, I want to cut it back, causing it to turn an unattractive black. When I cut back “John Fanick,” “Delta Snow” (also recommended) and “Robert Poore” (also recommended), they simply oblige me by growing again, thereby remaining relatively attractive.

A shorter one that I’m going to try is P. Carolina ssp. Carolina “Kim” that originates from Alabama and was the best performer of the Carolina phlox. At two feet tall, “Kim” bears lime-colored leaves that provide a lovely horticultural contrast after its late May-early June bloom period.

P. paniculata “John Fanick” appeared on the horticultural scene in the 1990s. Called one of the best phlox cultivars ever, “John Fanick” seemed to have it all. It had a lovely scent, was beloved by butterflies and theoretically was mildew free. I have grown it the last ten years and while I love its aroma and the clouds of swallowtails it attracts, my “John Fanick” develops serious powdery mildew in August, just at the time I want to cut it back. I tolerate it in my two large groupings because the mildew arrives after the bloom time.

However, I was gratified to see that it had not performed well in the Mt. Cuba trials — and that contrary to its reputation, “John Fanick” lacks good powdery mildew resistance. In other words, I wasn’t the only one having this problem. Misery loves company.

While the showy phlox tend to be those that grow in full sun, the woodland phlox grow well in shade. Unfortunately, P. divaricate cultivars proved to be highly susceptible to mildew except for “Blue Moon.” Creeping phloxes performed far better than P. divaricata, but be aware that creeping phloxes spread through rhizomes so they can be hard to contain.

There truly is a phlox for every gardener. The study demonstrates that gardeners have to choose their cultivars carefully — but here the Mt. Cuba Center has done all the research for you.