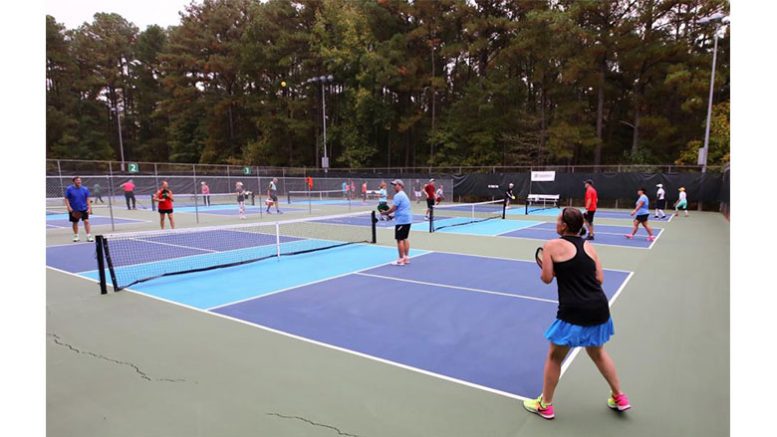 Pickleball — a sport that combines elements of tennis, badminton and ping pong — is one of the fastest growing sports in the world. It’s also one of the fastest-growing sports in Chapel Hill. But some tennis aficionados say that this rise in popularity has come at the expense of the town’s tennis facilities, leading to a minor turf war between advocates of the two sports.

As Pickleball Grows, Some Say Enthusiasm For Tennis Has Waned

The town’s willingness to put resources behind the burgeoning sport has delighted local pickleball players. One of those, Sandy Douglass — Orange County’s USA Pickleball Ambassador — says they’ve been able to work together with Chapel Hill Parks & Recreation to help the sport grow.

“Due to our explosive growth, we have found working with the town to explore additional ways to support pickleball to be quite positive,” said Douglass.

But not everyone has been as happy about the new direction. Jerry Edwards, one of the founders of the Friends of Chapel Hill Public Tennis, has been playing tennis at Ephesus Park with friends and family since 1982. So when the town decided to convert two tennis courts at the park to pickleball courts several years ago, he saw changes coming.

“A few years back, the Parks and Recreation Commission approved a proposal to convert two of the tennis courts to pickleball, and renovate these courts multiple times,” said Edwards. “With the growth of pickleball, these courts have been heavily used, and with growing numbers of players, there has been a push with the town for more courts.”

Edwards says that since then, the town’s tennis facilities have fallen into disrepair — and not just at Ephesus Park. He says that this lack of maintenance has caused usage of the Town’s public courts to wane, not the other way around.

“Noticeably, the number of tennis players using Chapel Hill public tennis courts has decreased,” he said. “But this is at least partly due to the poor condition of courts and the generally uninviting environment. I use the analogy that if you are a landlord of an apartment but let it become run down, tenants will begin to leave. It is not due to the decreasing number of tenants, but to the conditions.”

Pickleball and Tennis Players Look to Parks & Recreation for Answers

What some see as a shift in priorities has led to pickleball and tennis players competing for attention from the Parks & Recreation department. Phil Fleischmann, Director of Chapel Hill Parks & Recreation, says that both sides have been active in communicating their wants and needs with the department.

“Players from both sports are engaged with Parks and Recreation and Town leadership regarding needs and interests,” said Fleischmann.

Edwards says that at first, he didn’t feel that his concerns were listened to.

“When nets are taken down due to safety conditions of the courts, converted or eliminated for other purposes, these are the people impacted,” he said. “I was told by a commissioner at one meeting that the tennis people are not as “organized” and therefore not heard and, I would add, ‘represented.’” In response, Edwards created the Friends of Chapel Hill Public Tennis to help advocate for the Town’s tennis players. Organizing, he said, made a big difference.

“We are finding out that with the website and becoming more organized, the town is making efforts to improve our tennis court conditions,” he said. “In fact, the original renovation proposal for Cedar Falls was to eliminate a full-sized court for junior-sized courts, but we objected to get the proposal revised to include all six full-sized courts.”

Chapel Hill’s pickleball players have also been organized. Douglass serves as an Ambassador for the Orange County chapter of the USA Pickleball organization along with several other residents — including Brad Hemminger, husband of Chapel Hill Mayor Pam Hemminger.

Both sports look to the future

While both sides are “fighting” a literal turf war, neither seems to see the other as strictly adversarial. Both Douglass and Edwards expressed a desire to see more support from the Town for their sport, but not explicitly at the cost of the other sport.

“We would like to ensure that tennis players understand that pickleball and tennis can coexist and easily share courts,” said Douglass. “We don’t look at this as “us or them” but rather how we can collaborate and work together to make sure each sport has places to play.”

Edwards expressed a similar sentiment, saying that his real goal is to get the Town’s attention and commitment.

“Our goal is not to compete with other sports, but to work with the town to improve conditions on our existing public tennis courts,” he said. “We have stated our expectations of “Fairness and Transparency” which the tennis community feels has been missing over the recent years.”

And based on some of the Parks and Recreation projects slated for the coming year, it looks like they may both get their wishes. Fleischmann says that the Town is working on projects that benefit both communities.

“Currently we are addressing needs at the Ephesus Park complex,” he said. “The Mondoten surface at the pickleball courts has recently been refurbished and we continue to explore suitable options to resurface the tennis courts with the intention of moving forward with needed maintenance next year. The Cedar Falls tennis complex is slated for reconstruction next year. A virtual public meeting is planned for the evening of Thursday, Dec. 2 in order to provide an update on the project and solicit feedback on the plan.”

3 Comments on "As Pickleball Grows in Popularity, Some Tennis Players Feel Underserved"