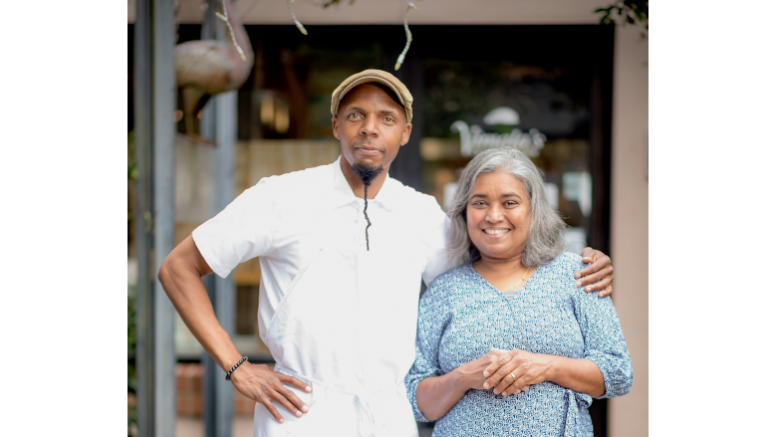 Vimala Rajendran (right) — proprietor of Vimala's Curryblossom Café — poses for a photo with longtime employee Lamont Lilly. Rajendran helped pioneer the living wage in Orange County by compensating her employees fairly due in large part to her philosophy of creating joy and liberation in the workplace. Photo by: Yuly Martinez

Vimala Rajendran, the namesake of Vimala’s Curryblossom Café — an institution in downtown Chapel Hill since 2010 — understands that sometimes you have to fight for what you believe in.

It would be fair to say that Rajendran, who started her business 28 years ago inside her home, is the true pioneer of the living wage in Orange County.

“I am part of a national group of restaurant owners who believe that if we pay up front from our profit to the workers, then we save on the other end with not having to hire and train more often,” Rajendran recently told The Local Reporter. “We have more employee retention, and we have a morale that is joyful. There’s a line in our in a mission statement that says we organize the workplace around joy and liberation.”

The restaurant’s website features Vimala’s mission statement, which she credits as being a guiding force in her everyday life.

“The written credo actually holds me accountable to it,” Rajendran, a native of Kerala, India, said. “It’s a string that I’m pulled by. I have to be answerable to my own conscience. There is no compromise…I have chosen to make this decision as the sole proprietor of this business. I have chosen to be not compromising on any of those principles — principles of integrity.”

Vimala’s mission statement reads in part, “We bring our community together with love, warmth and hospitality over delicious, healthy food. We prioritize worker, environmental, and social justice; accessibility through affordability; and sustainability at every level. We pay a living wage.”

Rajendran pays her restaurant employees $20 to $25 per hour, which is on the high end of service industry salaries. However, Vimala is quick to point that everything is relative.

“I still think it’s not enough money,” Rajendran said. “That’s the point I want to make. What we call a livable wage is only possible because we also take tips.”

The minimum wage in the state is currently $7.25 an hour. And restaurant workers — otherwise known as “tipped employees” — are only guaranteed $2.13 per hour, according to the N.C. Department of Labor’s website.

Rajendran said when she opened her storefront in 2010, it was decided early on that tips would be divided evenly among all restaurant staff despite opposition from the N.C. Restaurant & Lodging Association [NCRLA] — the trade group that advocates for the industry. Rajendran said she openly defied state regulations and cease and desist letters from the NCRLA demanding she stop splitting tip money among her restaurant staff.

“Our workers, by democracy, came up with this plan — the founders, the people who were the first crew members who helped me start the restaurant — told me they wanted the tips to be split evenly,” Rajendran recalled. “I have been part of the national movement to fight against tipped minimum wage.”

Since that time, industry regulations and state laws have changed to allow tip splitting among restaurant staff, but one thing has never changed — Rajendran’s dedication to her employees’ happiness and well-being.

For the past seven years, a local nonprofit — Orange County Living Wage (OCLW) — has been certifying and promoting employers in the county who compensate their full and part-time employees with a living wage of at least $15.85 an hour ($14.35 with employer-provided healthcare), according to the nonprofit’s website. Orange County Living Wage has certified more than 300 local employers since its inception in 2015, including Vimala’s Curryblossom Café.

Lamont Lilly, a local activist, community organizer, and longtime Vimala’s employee, said paying a living wage to service industry workers has taken on greater significance in light of the global pandemic and the shuttering of a good number of restaurants in Chapel Hill and Carrboro.

“A livable wage not only allows you to whether the storm, it extends dignity and worth and respects your basic needs in the process,” Lilly said. “At least I can breathe while the economic [storm] passes through.”

Last month, the U.S. inflation rate hit 8.6% — a 40-year high — according to the U.S. Department of Labor, and the current economic crunch has renewed calls for a living wage in North Carolina.

“Many working class [people] and their households aren’t even staying afloat,” Lilly observed. “That’s because the math ain’t adding. Folks are barely holding and slowly sinking.”

“Thanks to Vimala’s Curryblossom Café and my livable wage here, as a worker, I’m still standing, even preparing to be a first-time homeowner pretty soon,” Lilly continued. “We’re just working hard and staying humble.”

After 28 years in business, Rajendran said her employees’ happiness and the restaurant’s mission remain one and the same.

“To see my coworkers, my team take such pride in their work and when I take their pulse to see how they’re doing — they’re joyful to be here,” she said. “That’s a fulfillment of my mission to have a workplace with joy and liberation.”

Be the first to comment on "Pioneering the Living Wage in Orange County: Vimala’s has Championed Restaurant Workers Since 1994"