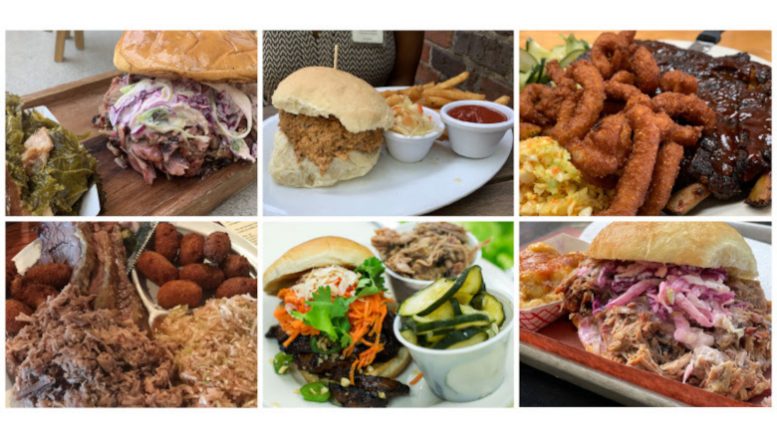 North Carolina barbecue benefits from a wide variety of influences, from Native Americans, to European settlers, to African Americans, and to modern influences, such as newer equipment and methods to cook the meat.

The official “Barbecue Belt,” stretches from the Carolinas to Kansas and Maryland. For as much as barbecue brings people together at picnic tables across the country, there are also some historical influences and regional distinctions that inspire a bit of friendly (and delicious) competition between the masters of ‘cue, which for the rest of us, results in a tasty variety of flavors and styles to sink our teeth into.

Restaurants throughout Orange County, North Carolina offer two distinct styles of cue: The Eastern North Carolina style includes smoking the whole hog and then chopping it up into an unidentifiable mixture of light and dark meat served with a pepper and vinegar sauce.

Western/Lexington cue is also available in Orange County, which gives more focus to the pork shoulder, and tomatoes and brown sugar are added to the vinegar sauce and served on the side as “dip” used for dunking. Many chefs caramelize the skin, creating a crispy layer that surrounds the juicy meat.

The sides vary from restaurant to restaurant as you see in the list below. At some restaurants the slaw is lightly dressed with mayo, vinegar, and pepper, and at others, the slaw is finely minced with no mayo in sight, dressed in vinegar with a bit of tomato ketchup for a tangy zip. This slaw can sometimes be found tucked within a pulled pork sandwich.

October is an ideal month to try local BBQ. Maybe that’s what prompted many BBQ industry members to designate October 12 as National Pulled Pork Day. So no matter what your sauce preferences may be — tomato-based, mustard-based, vinegar-based, etc. — just be sure to slather it on and offer a toast to our delicious North Carolina BBQ.

Here’s a rundown of Where to Get BBQ in Chapel Hill, Carrboro and Hillsborough:

A sampling of local restaurants that feature BBQ on their menus and are known for delicious BBQ entrees and sandwiches:

Be the first to comment on "Pit Stop: 16 Delicious Options for Barbecue in Orange County, NC"