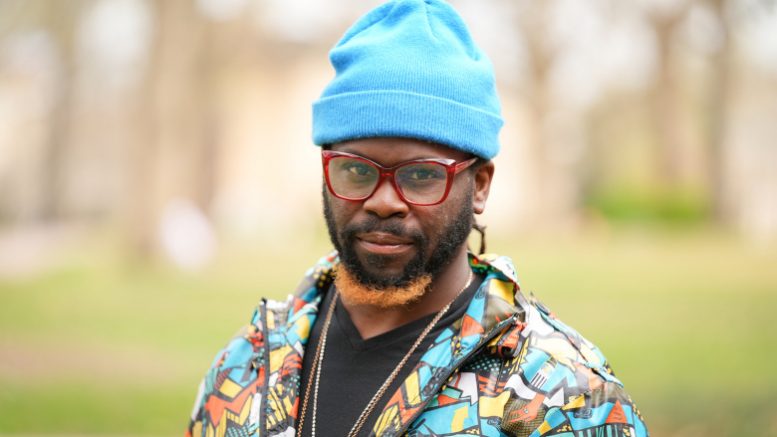 “I think in a lot of ways, my life has been filled with poetry,” said Chapel Hill’s first Poet Laureate CJ Suitt (he/they). Born and raised in Chapel Hill, they first fell in love with the spoken word growing up in the Southern Pentecostal Church, where “preachers could take thousand-year-old stories and apply them to their daily lives.”

It wasn’t until their high school English teacher encouraged them to enter a Black History Month celebration that they started performing.

“It was probably only like five of my friends, but they stood up cheering for me and I felt so much joy,” Suitt said. “All I did was share myself and my story.”

Suitt finds inspiration in the energy of the world around them, where things like passing snippets of conversations or the wind blowing can spark their creative genius.

“The live moving world is so inspiring to me,” Suitt said. “I grew up in a very busy house, my favorite places to write are public places: bars, parks, malls.”

Suitt’s philosophy is that “poetry is the water of all art forms,” meaning that “it can be shaped into other media, like cooking, fashion and theater.” In short, the art of it is everywhere and in everything.

“[Poetry] has the ability to give life and joy to all other art forms,” they said, describing poetry as “a universal solvent.” Through their career as a poet, Suitt has had the pleasure of collaborating with other artists on various interdisciplinary projects.

When it comes to being the Town’s poet laureate, Suitt doesn’t see it as a superficial title or award and has no plans to take a backseat.

“Being the first poet laureate means setting a standard and being a literary representative for poetry and poetry-adjacent literary art forms,” they said. “And in lifting up and highlighting works from the past, present and the future.” Suitt sees it as a commitment to pushing the art form forward in social and civic life in the Town.

Though naming a Black Queer man as the poet laureate is a diversity win for the Town, Suitt has always spoken truth with his craft. With eloquent frankness, they’ve been clear about their experiences as a queer person of color in the town whose history is often at odds with their identity.

“In one of my first pieces that I performed in 2008, which I still perform today, I’m in direct conversation with the politics of Chapel Hill,” they said. In some ways, Suitt believes that not much has changed since then. Though these topics may be difficult, they’re still important and worth having.

“I’ve been called on to write about specific moments in time, but that would have happened regardless of being named poet laureate,” they said.

“It feels important to speak on Chapel Hill, in the same way that James Baldwin has a quote about being critical of America because he loves the country,” Suitt said. “I love Chapel Hill and want to critique it to see it live up to its full potential.”

“Much of my work in the past has to do with being an ‘artivist,’” they said.

After a campaign calling for the removal of Silent Sam, a memorial to confederate soldiers on UNC’s campus, the NC General Assembly issued a 5-year moratorium on confederate monument removals. “You can see how what happens in Chapel Hill goes up the chain of command in a lot of ways because the university is here and so powerful,” Suitt said.

Suitt has big goals for the position, like collaborations with other artists and events that better engage the community. But challenges, like the public’s apprehension to attend large gatherings, as well as finding necessary resources like funding, stand in the way of letting the position reach its full potential.

Thankfully, the community has showed up to support Suitt; it’s the institutions that have presented more of a challenge when it comes to opening up their wallets.

“There was a bit of an underestimation in what it takes to do the work,” Suitt said.

“What you’re paying for is the years of training and experience to make that final product,” they said. Suitt’s stipend for the position is $1000 a year, over a two-year term. “But what is supposed to get done?”

It’s not uncommon that the public underestimates the value of art, but that’s one thing Suitt hopes will change.

“As a poet and artist, what I’m trying to get institutions to understand is it’s actually work in the same way the Town councilmembers hold a position,” they said. “The budget impacts how well you’re able to support yourself, and that impacts the position.”

A physical office space that would serve as a landing zone is also on Suitt’s wishlist. “Even if it changes locations from month to month,” they said. “Those sorts of benefits add value to any position.”

Suitt is a powerhouse of artistic talent but remains humble when asked what advice he would offer other aspiring artists.

“All advice is autobiographical, which means what worked for me may not work for you,” they said.

“Follow your curiosities, leading you down the path of poetry.”