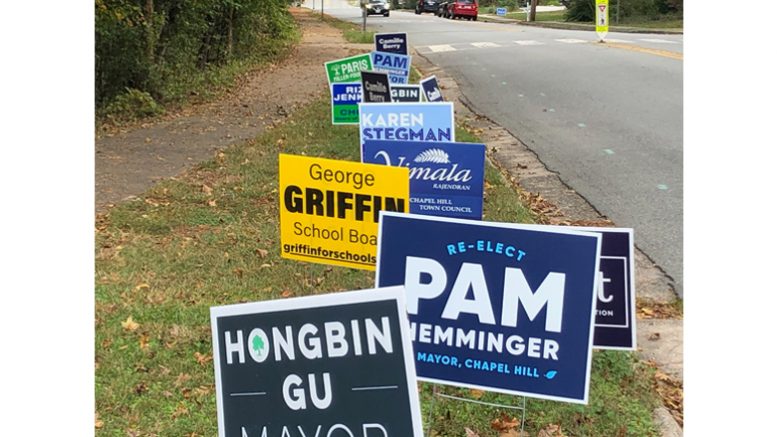 Sign war: What is it good for? Photo by David Schwartz.

As the leaves fall, the signs rise. And while political yard signs are not literally as numerous as autumn leaves, they certainly seem that way. Particularly in and around Chapel Hill and Carrboro. Yet as numerous as the signs are, the misunderstandings about them may be even more widespread, among candidates as well as voters. While the boost to name recognition is obvious, there is little evidence the signs have much effect beyond that on the outcome of elections.

“I had initial reservations about signs for my campaign,” said Adam Searing, a candidate for Chapel Hill Town Council. “The professional people who run campaigns say that yard signs are not a critical part of a campaign. But supporters like to put them in their yards and around town. And people do notice. I feel now that you have to have signs around town to be a credible candidate.”

He also noted that signs have become more important this year because many of the in-person activities such as rallies or door-to-door canvassing cannot practically be done safely during a pandemic.

Yard signs, like buttons and banners, are part of “the campaign-industrial complex,” said Searing. “We had about 400 printed in the first batch, but by our own estimate about half have been ripped, defaced or stolen. So we just put in an order for a few hundred more.”

The cost of signs varies greatly with quality, quantity, size and lead time, but the range is about $5 to $9 each.

And while the signs are clearly political speech protected by the First Amendment, there are numerous regulations covering the size, number and placement of the signs. County boards of elections take the lead in establishing and enforcing those rules, with deference to municipal or other local stipulations.

“There are various local and state ordinances regulating signs,” said Rachel Boyce Raper, director of the Orange County Board of Elections. “Our office does not collect data on political yard signs.”

In reference to reports of signs being damaged or taken she stressed that “it is a misdemeanor for a person to steal, deface, vandalize or unlawfully remove a political sign that is lawfully placed. Please contact the Chapel Hill police department should you need to report a crime.”

Raper also noted that “political signs should be removed 10 days after an election. Signs remaining in the right-of-way of the state highway system more than 40 days are deemed unlawfully placed abandoned property and can be removed and disposed of without penalty.”

Can be, but municipalities are reluctant to spend time and tax dollars on duties that are supposed to be the responsibility of the campaigns.

“The town can come after you if your signs are not taken down after the election,” said Searing. “Usually campaigns make an effort to collect the signs. Frankly you don’t want to embarrass yourself by having them left up. There have been efforts among all the campaigns [in prior years] to remove all the signs. I have participated in those.”

The problem of proliferating political placards is neither new nor unique to this area.

A decade ago The Atlantic reported on yard signs in Massachusetts under the headline “The Popularity and Irrelevance of Our Lawn Sign Wars.” Slate ran a similar story about the same time looking at Ohio, with about the same conclusions. The Washington Post had a go in 2015, as did the Chicago Tribune in 2018. All of the coverage cited several studies, some from as long ago as 1980s, but most in the 2000s. Those broadly confirmed that yard signs help with name recognition but have little substantive influence on the elections.

Neither the UNC School of Government nor the Department of Political Science were able to provide citations of more recent studies or any comment for this story.

The Atlantic feature quoted Kevin Frank, communications director of the Massachusetts Democratic Party, saying “I’m not sure the day ever existed where [yard signs] made a difference for a candidate.” It also quoted Tim Buckley, communications director of the Massachusetts Republican Party: “At some point, all those signs become really more of a burden, because you’re beset by people demanding more signs….And the candidates want to see their signs out there, as well, so you have to produce boatloads of them, and you can’t keep up with the demand. Even though they don’t seem to make a difference.”