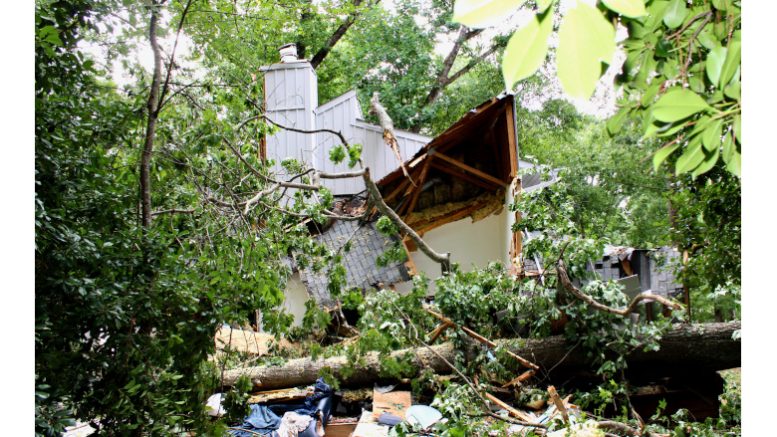 Sounds of chainsaws are whirring all over Orange and Chatham Counties this week after a weekend of soaring temperatures and sudden, violent storms ripped through the area, causing significant property damage.

Heavy rain and high winds from a “pop-up” thunderstorm toppled a large tree and did extensive damage to a Chatham County home shortly after 3 p.m. on Saturday, July 23.

North Chatham Fire Department, FirstHealth EMS, and the Chatham County Sheriff’s Office were dispatched to a “big tree” that had fallen onto a home located off Village Way in Fearrington — an incident that injured two adults during the violent thunderstorm.

One of the victims was trapped, according to local officials and required extrication by the fire department before EMS could transport them to the hospital. Both victims were transported to N.C. Memorial Hospital in Chapel Hill to be treated for injuries.

The home has since been declared “unstable,” according to Steve Newton,
Emergency Management Director of Chatham County. At press time, the home was still surrounded by police tape and declared too dangerous to enter.

Meteorologist Nick Petro of the National Weather Service in Raleigh said the forecast last weekend for the Chapel Hill area was for high temperatures in the upper 90s with a heat index on 104 degrees. However, no severe storm warnings were issued, only reports of a chance of scattered thunderstorms in the afternoon. During the storm, quarter-sized hail pummeled certain areas of Orange and Chatham counties, with wind gusts of up to 60 mph.

A “pop-up” thunderstorm is the term used to describe a random, scattered thunderstorm with no apparent geographic organization. According to the National Weather Service [NWS], clouds and precipitation are caused by rising air. The more violently the air parcels rise, the more significant the resulting weather is. So, the “lighter” the air is, the easier it is for a trigger to get it rising. Hot, humid air is “lighter” than cooler, drier air which is why thunderstorms are so much more common on hotter, steamier summer days, according to the NWS website.

Most thunderstorms occur later in the day because, in the evening, the ground is at its hottest, following an entire day of sun and heating, which causes the warmer air to rise and meet the relatively cooler air up in the atmosphere, leading to instability. Daytime heating enhances the air’s capacity to evaporate water vapor, according to the NWS website.

After a day of intense heat on Sunday, July 24, violent thunderstorms once again rolled through the area, causing extensive property damage in northeast Chatham County and Chapel Hill. Temperatures on Sunday peaked in the high 90s with a heat index of 104 degrees.

Carrboro Fire Rescue responded to a report of a structure fire at 1122 Smith Level Road. Upon arrival, crews discovered a working fire in a large shed structure.  Carrboro Fire received assistance from the Chapel Hill, White Cross, and North Chatham Fire Departments. The fire was quickly controlled, with no injuries to firefighters or civilians. According to Carl Freeman, Deputy Chief Fire Marshal, Carrboro Fire Rescue Department, the fire’s origin appeared to be a lightning strike.

Eyewitnesses described the incident as a “plane crash in an open field.” Responders were on the scene for over an hour, beginning around 5 p.m., and the blaze was extinguished by 7:30 p.m. Freeman said more than 20 apparatuses and 44 department personnel were involved in responding to the fire. Freeman added that it took Carrboro firefighters 10 minutes to extinguish the fire, and fortunately, no animals were harmed by the blaze.

“Our 9-1-1 Center did receive one call for a down tree during the [July 23-24] timeframe and we have not received any reports of structural damages,” Pickhardt told The Local Reporter.

With regard to storm damage, county officials encourage all citizens to immediately report all emergency threats to life and safety to 9-1-1, Pickhardt said.

“Community members can share non-emergency storm damage with us via CrisisTrack (www.readyorange.org),” she added. “We use this information to better understand storm impacts to our community. It also helps our team to determine what state, federal, nonprofit, and voluntary agency assistance may be available depending on the severity of the storm.”

Around 3,000 people were left without power in Wake County, and 2,000 had outages in Orange County, according to the North Carolina Department of Public Safety. Severe thunderstorms are expected to continue throughout the week and into this weekend, according to the National Weather Service in Raleigh.