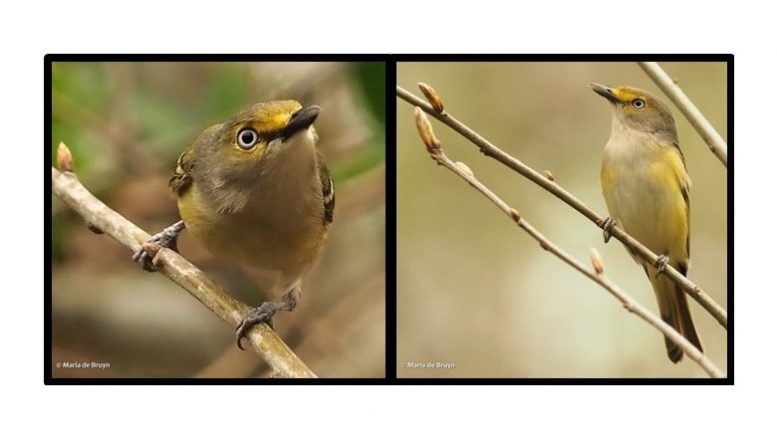 You don’t need to travel much, however, to be able to see quite a few different types of birds. Since 2013, when I began recording which birds I’ve seen in my yard or flying over my home, a total of 88 distinct species have come by! One that I’ve observed on only four occasions at home, even though they’re not uncommon in nature reserves, is the white-eyed vireo.

Most bird species with white eyes are found in Africa and Australasia. Our white-eyed vireos are born with dark eyes that become paler during their first winter or spring. The adult vireo’s bright white eyes are surrounded by what birders call yellow spectacles.

These vireos don’t come to feeders in the spring but eat flies, beetles, moths, caterpillars, spiders and many other insects. Outside the breeding season, they also eat fruit and berries. Most of these vireos don’t spend their winters in the southeast United States but arrive back in spring so that they can breed and raise their young here. Only the males sing during breeding time. Once you recognize their song (listen to this recording), it helps you find them as the trees and shrubs leaf out.

White-eyed vireo nests usually are situated in a y-shaped fork of a shrub or tree only about 2-6 feet above ground. Sometimes, they will even build their hanging cup-like nest very near a walking path. They first make a sticky shell out of insect silk and spider web strands and then fill it with leaves, bark, moss, lichens and other plant materials. While the female vireo spends more time brooding the eggs for about 13-15 days, the male also spends time on the nest. When the eggs hatch, both parents bring food to the young until they are ready to fledge after 9-11 days.

The white-eyed vireos are now engaged in courtship and nest-building, so keep your eyes out for them! They are beautiful birds and interesting to watch; just don’t come near a nest if you see one but leave them alone to raise their young in peace.

Also, please still remember to help out the victims of the war in Ukraine (and other conflict areas) through one of these listed options:

Where to donate to help Ukraine

Nature, The Wild Side

Baby birds are still around!