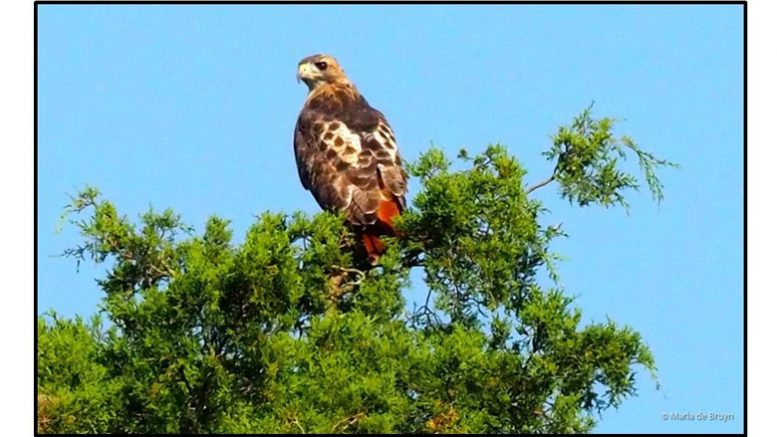 North Carolina is known among birders as a destination for “hawk watches,” i.e., gatherings of people to see groups of hawks that are migrating south (for winter) or north (for summer). The mountains offer wind currents that the birds can use to speed their journeys and many raptor fans will go to Grandfather Mountain’s Linville Peak to see the spectacle in autumn. The birds on view will include bald and golden eagles, peregrine falcons, kestrels, merlins and red-tailed hawks like the one above.

Closer to Chapel Hill is the hawk watch at Pilot Mountain State Park in Surry County. There spectators can watch as broad-winged hawks, Northern harriers, vultures, sharp-shinned hawks and Cooper’s hawks fly overhead. As October progresses and migration is winding down, however, we continue to see resident raptors roaming in our area.

The red-shouldered hawks are looking for easy meals. Their favored foods, in addition to smaller birds and mammals, include amphibians. During the summer, I lost two of the green frogs in my pond to a hawk that had taken up a watching post in tree branches hanging over the water source (top two photos below). I saw the hawk watching but didn’t witness the capture; hawk feathers were floating in the water, however, and all croaking had ceased.

As autumn approached, I witnessed a red-shouldered hawk pursuing frogs at a local nature reserve (bottom two photos below). At first, I didn’t realize what the bird was doing. I saw the raptor intently peering down at the muddy pond’s edge and walking back and forth along the water. Then, suddenly, I saw the hawk plunging its claws into the ground and up it came with a meal. All animals must eat, of course, but I did feel sorry for the frogs that were caught and that spent their final moments of life in terror. A more peaceful scene occurred recently at another nature park when I saw a Cooper’s hawk wading in a creek. At first, I thought the hawk wanted to bathe but was hesitating because all the other birds in the vicinity were making a warning racket announcing the predator’s presence.

At one point, the beautiful bird seemed to sit down, but it didn’t splash in the water. The Cooper then kept peering up and around as it moved forward. Finally, it stopped watching the other birds and dipped its beak into the creek, coming up with a small fish or other water creature. It swallowed the prey quickly and seemed satisfied as it finally flew up into an overhead tree branch. Later, I saw it in the water downstream; perhaps it was going to bathe after all. As the trees lose their leaves, it will become easier to spot our resident raptors. An owl was recently swooping walkers in my neighborhood. The barred owls have been calling often recently and perhaps they are staking out their nesting territory as they will begin constructing nests in January. Perhaps another owl was invading our residents’ area and they were becoming a bit testy. Fortunately, my nature-loving neighbors just warned one another to be watchful and to wear a hat, while making comments like:

In the coming weeks, you may also see kestrels and hawks sitting on wires along roadsides or flying overhead. Their graceful flight and beauty make for enjoyable bird watching if you get the chance to go out and about. And keep an eye out for owls if you take a walk in the woods!

To feed or not to feed — is that the question?

Be the first to comment on "Raptors are Roaming"