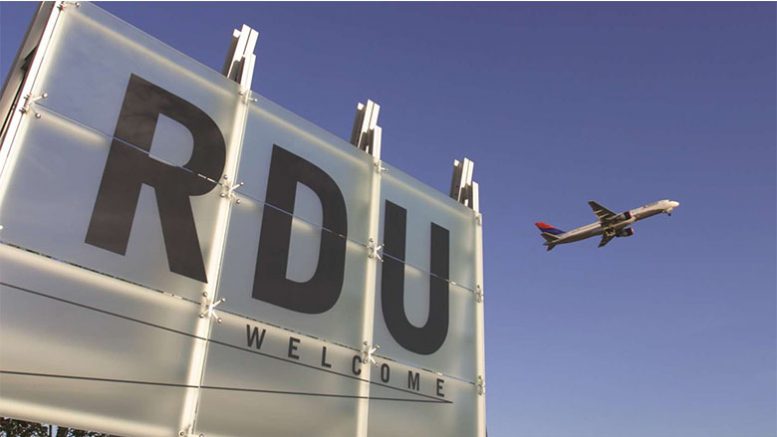 Heading into Thanksgiving week and the holidays next month, travellers using Raleigh-Durham International Airport (RDU) have more options for ground transportation than since the start of the pandemic. On Sept. 20, public transit operator GoTriangle stated that it would continue the streamlined airport bus service put in place when it restructured its routes to respond to lower ridership. The trip takes about an hour to or from Chapel Hill.

That same day, walk-up service at the cab ranks outside the arrivals hall at RDU again had vehicles waiting for the first time since RDU Taxi company ceased operations more than a year ago. To be sure, other cab companies, such as Skylink Shuttle, had managed to continue airport service through the pandemic, scaling back operations to match demand and taking reservations by telephone and online.

“RDU’s previous taxi partner discontinued service in 2020 during sharp declines in passenger traffic that bottomed out at 3% of 2019 levels,” the Airport Authority told TLR. “We planned to bring taxis back to RDU when they could be supported by customer demand and growth in passenger traffic, and when it was financially viable for a taxi company to operate at the airport. The Airport Authority Board voted to implement a new short-term agreement with Taxi Taxi in September 2020 amid growing demand for air travel and taxi service. At that time, passenger traffic had recovered to 67% of 2019 levels, although there was not a specific number that triggered the resumption of service.”

RDU went to the business community to find a vendor for taxi service. Of the 7 vendors it contacted, only 1 had the available labor resources needed to fulfill the airport’s needs. RDU will enter a competitive bid process for a long-term taxi provider before the Taxi Taxi service contract expires.

The airport authority does directly coordinate bus routes, but RDU and GoTriangle regularly work together to meet the need for easily accessible, affordable and convenient public transportation to the airport and other locations. RDU also collaborates with GoTriangle through the Raleigh Chamber of Commerce’s Regional Transportation Alliance to support initiatives like a relocated Regional Transit Center. Currently the center is at 901 Slater Rd. in Durham, near the interchange of Interstates 40 and 540.

“When RDU developed its Vision 2040 master plan for growth in 2017, it identified ground transportation as one of four priorities to consider when making decisions about major campus construction projects (along with the airfield, terminals and general aviation),” the authority added. “As passenger traffic continues to recover and RDU resumes building for the future, we will pursue projects that will help relieve congestion on the curbs and make our guests’ experience easier and more convenient.”

The current shuttle service has been in effect since October 2020. GoTriangle said it has not received any complaints from residents in Orange County, who can continue to access the airport via a connection at the Regional Transit Center from Route 800, as provided prior to the pandemic.

Due to the national shortage of bus drivers, GoTriangle has needed to reduce service on some routes to better match its staffing levels. The Route 100 bus and RDU Shuttle continue to operate every 30 minutes Monday through Saturday until 7 p.m. and hourly in the evenings and Sundays. However, the Route 800S bus (Streets at Southpoint to Chapel Hill) has been suspended since June 2021, which has resulted in a reduction in service frequency on the Route 800 bus to every 30 minutes during weekday peak hours.

Taxi Taxi did not reply to repeated inquiries by telephone and e-mail, but according to its website, the initial fare is $1.95, plus $2.50 per mile. That would mean a base fare of about $52, plus taxes, fees, and gratuity, or close to $60 for the 20-mile trip from RDU to the center of Chapel Hill.

To put that into context, the fare for the same trip on ride-hail services such as Uber and Lyft has varied from $30 to $80 depending on day and time. The fare on Skylink Shuttle is $47. Mosaad Mohamed, general manager and co-owner of Skylink, said he has drivers on call who can be on the curb at RDU in 10 or 15 minutes. “It is always best to make a reservation in advance, but arriving passengers can call us from the service desk near baggage claim. We always answer the phone, 24/7.”

When the pandemic hit, Skylink lost 80% of its revenue. “I called all of our drivers together and asked them to split the remaining work so they could stay on and still get other part-time jobs,” Mohamed recalled. “Every one of them has families to support so I did not want to cut anyone off.”

Skylink began operating in 2012 when the national operator SuperShuttle pulled out of RDU and other regional airports. “We started with four vehicles and grew to 11, including vans, minivans and limos,” said Mohamed. “Now we are back to 5 vehicles and 7 drivers.”

When RDU Taxi ceased operations, there was merely a small sign to that effect on the dispatch booth. Skylink has asked RDU for a direct phone or at least signs advising arriving passengers of alternative services if the designated franchisee is short of cars. “There has to be some backup,” Mohamed stressed, “especially in bad weather, and for travellers that don’t use Uber or Lyft.”

Be the first to comment on "RDU Cab Ranks Active Again"