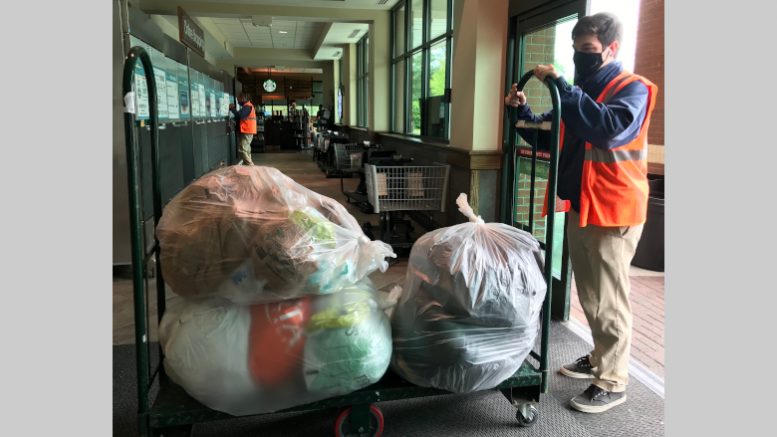 My father loved plastic bags. When my sister and I cleaned out his house after his death, we found old plastic bags tucked under the cushions on the dining room chairs, in the bottom of his sock drawers and in the corner of the coat closet.

As an inventor, an innovator and a practical man, my father immediately saw the utility of plastic. And being a child of the Depression, he never threw away a potentially useful thing, including a plastic bag. He was born in 1917, 10 years after the invention of plastic, but plastic wouldn’t be widely used until more than six decades later. His family used other materials for wrapping and packaging in the meantime.

As I go through the boxes from his attic, I find stacks of letters wrapped tightly in string. Straight pins instead of plastic paper clips hold pages together. Hair clippings are neatly wrapped in folded paper, one labeled in pencil, “C. W. Brown’s first birthday,” and tucked in an old cigar box. My Great-Aunt Alma’s lesson books, from when she taught in the one-room school near our Maryland dairy farm, are wrapped in a leather strap with a stiff handle.

Even as kids growing up in the 1950s, we didn’t have plastic. Supper leftovers were wrapped in aluminum foil. My mother told us that, during WWII, no one could get the precious foil, so she and other homemakers were happy when it returned to our local A&P grocery store. Only one box per customer.

Our Newfoundland dog’s treats were kept in the tin can they came in. The side of beef we had processed each year was wrapped in butcher paper, labeled with a wax crayon, and stored in the freezer on the back porch. Every jar was washed and saved on shelves in the cellar for potential storage of old buttons, dried beans or vegetables from the garden. Our compost bin was a great place to dig for fishing worms.

The single-use plastics we know today weren’t in wide circulation until the late 1970s after supermarkets discovered that plastic bags and plastic packaging were cheaper than paper, glass or metal. So today, it’s almost impossible to exist without plastic, though some folks are giving it a good try. Books like Life Without Plastic remind me of how it used to be. Comedian George Carlin once did a skit in which he suggested that Nature created human beings so they could create plastic and then humans could be “phased out.” I think now George would say that Nature made a mistake — that Nature might not recover from such a discovery. My father, a lifelong environmentalist, would also be dismayed by how plastics now dominate our lives and threaten our planet.

Luckily, we live in a county that has cared about our environment for many years. More than three decades ago, Orange County began a solid waste recycling program. Today it is one of the best in the region.

I’ve discovered the complete alphabetical list of what can and cannot be recycled in our blue curbside carts and our recycling centers. It’s worth checking back regularly because what can be recycled changes, depending on the market. For example, in addition to plastic bottles, jugs, tubs and jars, we can now recycle #1 PETE plastic — the clear clam shells. That’s a new development.

I was surprised to learn that you can’t put aluminum foil or pie pans in your curbside cart. Those have to be taken to a Waste and Recycling Center and put in the metals bin along with other scrap metal such as bike parts or pots and pans.

I’ve been reassured by Orange County Solid Waste Department staff that everything allowed in our curbside recycling carts is being sold to make into other things. All those plastic newspaper sleeves and dry-cleaning bags I diligently take to the grocery store bins also are sold for remanufacture. Harris Teeter, for example, sends truckloads of the plastic bags and film they collect to the Trex plant in Virginia to be made into plastic lumber. We’re lucky, too, because our region has many companies that depend on our recycled stuff. In North Carolina and South Carolina alone, more than 3,500 people are employed converting bottles and other plastics to new products like carpeting, clothes and more bottles. Here’s a map that shows all the plants in the Southeast that use our recyclables to make new things. You can learn more at www.yourbottlemeansjobs.com about this thriving and expanding industry.

But we can do better. I try to remember three R’s: (1) Reduce — take your own cloth bags to the stores again, (2) Reuse the plastics you get and (3) Recycle — everything that should be in your curbside cart will be used.

It’s estimated that more than 70 percent of all plastic bottles are not recycled. That’s not good enough. Our local plastic-recycling industries can’t run efficiently if we don’t recycle. So let’s make sure all those water, milk, shampoo and laundry detergent bottles are in our curbside carts. Take your plastic wraps — making sure they’re clean, dry and empty — to the grocery store bins.

As Father’s Day approaches, I’m re-educating myself, so that we can help the environment as well as our local economies. My father would be happy to hear that all that plastic he saved is being put to good use.

1 Comment on "Re-Educate About Recycling in Honor of Fathers"