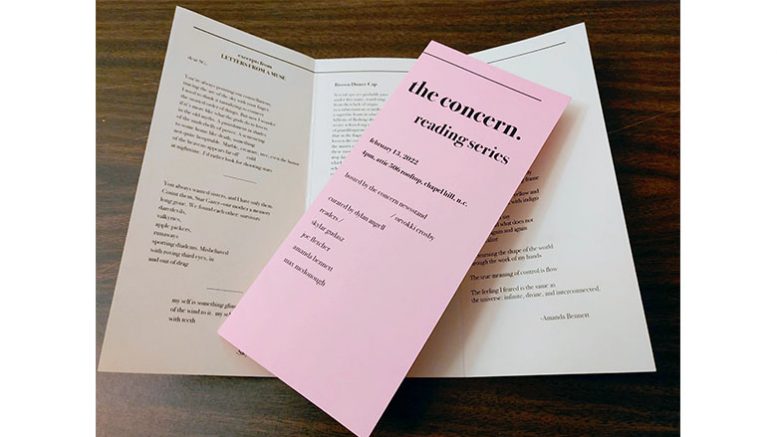 Pamphlet for the Feb. 13 poetry reading at The Concern Newstand. Photo by Pamir Kiciman.

Downtown Chapel Hill historically has been home to a vibrant cultural milieu, featuring multiple first-run movie screens, new and used bookstores, comic bookstores, new and used record stores and performance venues. Many of these have disappeared over the years and the pandemic, with its lockdowns and social isolation, has also taken a major toll on local arts. Several local cultural entrepreneurs, however, are bringing new ideas and energy to Franklin and Rosemary Streets and helping to revitalize the downtown arts scene.

Orvokki Crosby originally formed and conceived of The Concern Newsstand in 2017 as an exclusively online business. She recalls, “…many bookstores had closed, namely The Internationalist, the Bookshop and Nice Price Books. I felt I had the ability to carry some Chapel Hill tradition further in an unconventional way. There was nowhere then to buy art books, zines or unique magazines…”

In 2018, when the area’s first artist-run exhibition space Attic 506 opened at 506 W. Franklin St. upstairs from music venue Local 506, Crosby settled into a small physical location inside the exhibition space. Crosby and the founders of Attic 506 shared an interest in resisting commercialization and in providing for the evolving needs of the Chapel Hill-Carrboro creative community. “I am a part-time visual artist with a background working in arts administration, wholesale representation, coordinating and retail management,” Crosby said. “I am from Chapel Hill originally and moved back to the area [prior to the pandemic] after living elsewhere for many years.”

She connected with Dylan Angell, a writer and musician from Durham who had moved back to the area in 2020, after a reading series Angell was organizing in Mexico City was interrupted by the pandemic. Crosby recalls, “Once the vaccinations were underway in 2021, he approached me about organizing a poetry reading on the outdoor rooftop at Attic 506.”

The first reading took place on a beautiful summer evening in June 2021. Angell said, “I’ve always gravitated towards independently produced publications that blur genre and play with the rules of publishing. I feel like that aesthetic is well represented at The Concern Newsstand.”

Attic 506 and Crosby’s bookstore within it are in the Midway block of West Franklin Street, which sits at the border of Chapel Hill and Carrboro. This block has become a bit of a model for the revitalization of downtown.

“[It] covers a stipend for the poets as well as sound equipment that I needed to purchase. I’m also [contributing] my own money to supplement where needed and to pay for a free pamphlet with each reading that includes a poem by each writer as a takeaway and reminder to those who attended,” Crosby said. Writer Chanelle Bergeron at the August reading on the rooftop of 506 W. Franklin St. Photo by Orvokki Crosby.

The venue has hosted five readings beginning last June, with an average attendance of sixty people. While the readings normally are held outside on the rooftop of Attic 506, overlooking the corner of Franklin and Graham Streets, the most recent reading, on Feb.13, took place indoors because of rain.

Attendees at the February reading included friends of the readers, writers who have been showcased in prior months, fans of the written word and art as well as newcomers.

Attic 506’s long, narrow hallway was dotted with chairs that faced a microphone and speaker at the far end. Spaces currently occupied by artists and a new exhibition were also available for viewing. People milled around and spent time inside The Concern Newsstand before the event began.

During the readings some listeners closed their eyes, some kept their head down, others looked toward whomever was reading. Because all the seats were taken, people sat on the floor, stood, or listened from adjacent rooms. There was an attentive quiet throughout the whole space and latecomers entered gingerly. Attendees at the Feb. 13 reading inside Attic 506. Photo by Pamir Kiciman.

Poet Max McDonough began the reading with poems from his volume in progress called Python with a Dog Inside It. Amanda Bennett shared verses about the stages of grief. Skylar Gudasz read from an unpublished collection called “Letters from a Muse.” Joe Fletcher, who closed out the event, read from his book Partial Veil (Romance Press, Winter 2022).

The sound equipment Crosby purchased has come in handy to enable attendees to hear the readers over noise from the music venue downstairs and over the din of restaurant fans and AC units.

Thus far, each reading has featured four writers. “We call them poetry readings but much of the writing that has been presented is of some hybrid category of essay, poetry, prose or even performance art,” said Angell.

He plans to continue with the current format of the readings, but “occasionally break it up to present local presses that are important to the local scene and sold at The Concern Newsstand,” he said.

Angell added, “In April we will be highlighting a local press, Golias Books, which is co-run by local writer Christopher Catanese — who read in December — and we will present the poet Ted Rees who will read ‘Thanksgiving: A Poem’ which Golias released. There will also be live music.”

The Triangle offers other poetry readings but, according to Crosby, “This one…bridges a gap between the visual arts and the writing world. It might bring an audience to these writers that they wouldn’t normally get and give some food for thought to other artists coming to listen.” In addition to offering local writers a platform to share their work in person, The Concern Reading Series has “offered a social outlet in a very antisocial time period,” Crosby said.

“I feel our audience completely changed since the pandemic,” Crosby said. “Many people who used to come [to the readings and to Attic 506] stopped coming and new people became interested. I noticed a migration of new people to the area as well.’’

The reading series will continue at least until the summer, at which point the Orange County Arts Commission grant will run out and new funds will need to be procured.

Crosby said her business model turned out to be well suited to the pandemic. “My overhead is low and I am able to easily modify what comes in, in terms of spending. Also, during lockdown, people were buying books online, they wanted an escape from the screen.”