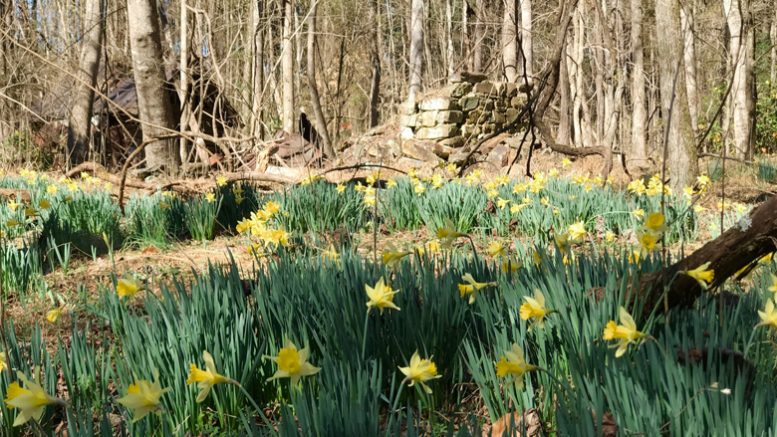 The Farmhouse Trail at UNC’s Carolina North in Spring

UNC and Duke Play an Outsize Role, but Their Properties are Not Public Parks

Chapel Hill and the University of North Carolina are linked historically, economically and physically. Chapel Hill’s fire trucks are not only painted Carolina blue but our town was created at the founding of UNC to quite simply “serve the University”. Down the street, Duke University (then Trinity College) opened in Durham more than 100 years after Chapel Hill and also is linked to the city where it was placed and grew. Both institutions have been powerful stewards of the land both where they sit and in the surrounding area. UNC Chapel Hill was founded as a public university with an original land grant that grew much larger over the years with substantial later donations of property from private individuals and other purchases. Duke’s transformation from Trinity College into a larger institution with the help of James Duke and Julian Carr meant extensive tracts of land were purchased for the campus and later added as the institution grew. Duke is still in the land buying business, having just purchased the contested Meadow Flats natural area – a property slated for development next to existing Duke forest land.

Living here in Chapel Hill and Carrboro we have benefited from UNC and Duke forests in multiple ways. One high profile example is public recreational use of much of these university properties – and mountain bikes and bicycling have been at the forefront of this recreation in recent years. Both UNC’s Battle Park and Duke’s Korstian division of Duke Forest played outsize roles in the inception of mountain biking in the 1980s. Battle Park, whose paths were established by UNC’s illustrious former president Kemp Plummer Battle, for years contained informal single track trails used as a training ground by the first groups of off-road cyclists in Chapel Hill.  In the same way Duke Forest played a major role in early efforts at mountain biking in the area. Off Whitfield Road, an extensive network of formal and informal trails created by hikers became one of the main places for these early riders to try out the capabilities of new off-road bikes. Most famously, William Nealy, a local kayaker, mountain biker, and author created and sold an extensive bicycling maps of the Duke forest trails, the first such publications in the state.

Duke Forest, while still allowing riders on its extensive network of graveled fire roads, banned mountain biking on single track trails many years ago – a development that would have no doubt provoked some interesting pictorial commentary from Mr. Nealy. Hikers however still enjoy extensive access to the Forest. Across Duke properties, as recreation use increased, the institution began a program of more intensive recreation management.

As Duke closed options and the sport of off-road cycling continued to grow, the early 1990s saw informal establishment of an extensive network of off-road cycling trails on UNC’s Horace Williams forest property – the 947 acres now known as Carolina North. The irascible philosophy Professor Williams  who donated his extensive landholdings to UNC that form the core of this property would be a little bemused with the bicycles roaming there today. Although perhaps not – he regularly rode “his horse over Bolin’s Creek” to his extensive landholdings there, then far out of town. With more use of this UNC forest in the last decade, the University formalized management of recreational use. UNC land managers took a more intensive interest in creating and maintaining trails – while still welcoming the public and mountain bike riders. Carolina North now forms the most extensive and popular mountain bike trail system in the area.

With their huge landholdings, UNC and Duke play an outsize role in our area’s concept of parks and recreation for the public. Our ragtag group of Tumbleweed Cyclery bike shop mechanics honed our off-road skills on many after work rides from Franklin Street down Battle Park’s trails in the 1980s. Today I find myself on UNC or Duke forest properties many times a week, a love shared by many Chapel Hill and Carrboro residents. What we all tend to forget is that this access and these uses are not guaranteed. Debate and discussion of the use of a public park or land owned by the town or county moves through a public process and is governed by public officials who are accountable to us all through our votes. This is simply not true for the property owned by these two universities.

UNC, while indisputably a public entity, has a broad responsibility to the entire state of North Carolina and beyond. As UNC historian James Leloudis so memorially writes, North Carolina’s leaders established a state university because they “believed that the survival of their fledgling democracy depended on the education of future leaders.” This means if UNC needs to expand the campus to the majority of Carolina North forest, it will happen regardless of town interests and pledges of protection. Chapel Hill’s interests as a town in public recreation are important, but in the end will not override the very reason the university and town were established. Years of public debate and discussion around Carolina Northare ample illustration.

Duke as a private entity, has even less public responsibility.  For example, a few years ago Duke determined that deer populations in much of its forest property were too high, so they now close many of the public trails for hunting each season. Recreation use became secondary – and there is no appeal. Even Duke’s recent purchase of the Meadow Flats natural area that was slated for development illustrates this. The area may now be preserved as forest but Duke was clear that “public access will not be permitted to this area.”

In the end, we here in Chapel Hill and Carrboro need to be aware that the public use of UNC and Duke property is at the pleasure and discretion of these institutions. Establishment of public parks and public land for forest and open space are the only real guarantees of accountable, accessible public land for recreation. While we should appreciate the recreation resources that the universities currently provide, we must not be lulled into failing to create our own parks, forests and trails for use today and for future generations. That is the only sure way to guarantee recreational resources both now and into the future. Adam Searing is a lifetime resident of Chapel Hill, a mountain bike coach and attorney.