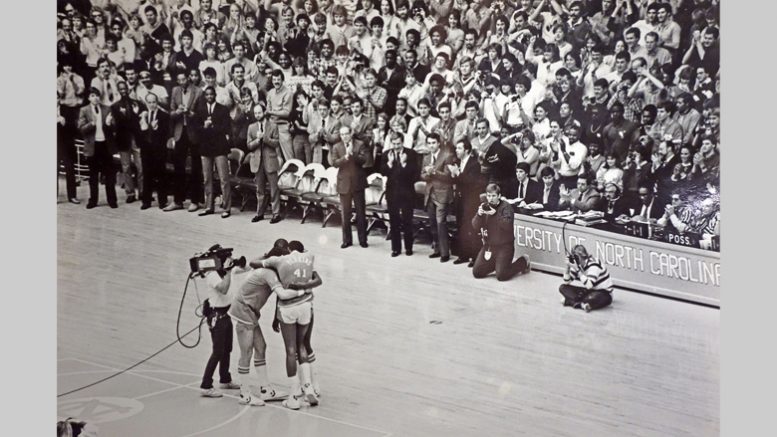 Last Saturday’s drubbing of Duke on UNC’s Senior Night conjured up a similar image from years past.

It is March 3, 1984, and that year’s farewell men’s basketball game celebrated seniors Sam Perkins, Matt Doherty and Cecil Exum, captured here hugging at midcourt in this photograph I made for The Chapel Hill News.

I purposely chose this high, oblique position to take the photo so the reader could sense the contrast between the moment of bonding among the three seniors and the illuminated faces of all those long-ago Tar Heel basketball fans cheering them on.

Additionally, this would be Michael Jordan’s final home game, in which the Heels would go on to beat “Dook” in double overtime, 96-83.

It’s said that you can’t hear a photograph, but I invite you to imagine the sound of this scene: the sensory blitz, the wave of enthusiastic applause.

But that’s not all I wanted you to notice; for there, in the coaches’ row, is the legendary quartet of mentors who crafted the roundball magic.

Can you recognize them, too? Left to right, Assistant Coach Bill Guthridge, then, of course, the legendary Coach Dean Smith himself. Next is Assistant Coach Eddie Fogler. And then there’s young Ol’ Roy, also an assistant coach, with his sideburns and not a gray hair in sight.

That’s not all. Of particular interest to any sports photo-historian is the photojournalist on his knees just to Roy’s right. That’s “Big Al” Steele, famous for his iconic image of freshman Michael Jordan, tongue out, nailing that corner jump shot to seal the one-point win over Georgetown with 15 seconds and secure the national championship of ’82.

Decades down the road, perhaps he/she, too, will dust off that old photograph and go “reelin’ in the years,” thanking the photo gods for being in that place at that time.

I asked Steve Kirschner, UNC’s Senior Associate Athletic Director for Sports Communications, what he thought about Senior Night. His response is a three-pointer:

Senior Night has always been special, no matter the school, the sport or era. It’s one of the celebrations that distinguishes college sports from the pros. It’s a celebration of four or five years of a commitment that a school and a team have with a student and his or her family. And of their commitment to that school. Freshmen don’t truly understand its significance, nor do athletes who go directly to the professional ranks. Coach Williams says it’s the one game each year he feels pressure to win, because he so badly wants the seniors to end their careers at home with a memory they will cherish forever. When you hear the seniors talk at that game about their experiences — whether it’s Tyler Hansbrough, Marcus Paige or Luke Maye — and you see the embraces players and coaches share from Sam Perkins to Garrison Brooks, it says a lot about the relationships between players and coaches that will endure for generations.