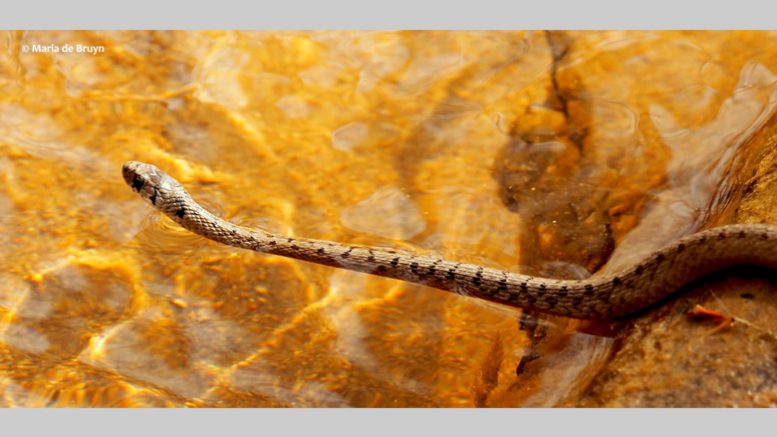 Despite the last few mornings of freezing temperatures, we’ve been having some rather warm autumn weather overall. And judging from photos I see posted online, people are still seeing snakes and turtles moving about. This makes sense, since we tend to see these reptiles more often in the daytime during the spring and autumn.

In late fall and winter, snakes go into a state called brumation, which is akin to hibernation. They do not sleep but their metabolism slows down as they become accustomed to lower temperatures. They become less active and don’t feed as often; male snakes need brumation to prepare for breeding.

Snakes sometimes emerge on warm days from their brumation dens (hibernacula) to bask in the sun.  Some of the more common snakes we may see in our area include black rat snakes, black racers and De Kay’s brown snakes (seen above).

Most of the snakes we encounter are harmless to humans, like this rough green snake. Nevertheless, many people have learned to fear and dislike snakes intensely. Not infrequently, people will kill them as soon as they see them, even in a nature reserve. But there is no need for that.

Snakes fulfil a useful role in our natural environment, many of them keeping rodent populations lower. This is also the case for the one venomous species we encounter in our area, the Eastern copperhead. Luckily, copperheads are not aggressive and about half of their bites are “dry,” not involving any injection of venom. That is certainly a blessing as I’ve found myself standing right next to one that I didn’t see since it blended in so well with the leaves, twigs and other vegetation in a nature reserve I was visiting.

If you are unlucky enough to be bitten with venom, it can certainly be very painful, as one of my neighbors and a fellow birder can attest. It’s therefore important to seek immediate medical treatment even though these reptiles rarely cause a human death.

So, what to do if you encounter a snake such as a copperhead in your vicinity? Rather than kill it so that your family members and pets don’t run risks, you can have the reptile relocated so that it can continue its natural role. There are commercial firms that remove snakes. But luckily in our area, we also have access to volunteers who will visit your home or place of business to capture and relocate the snake with no financial charge.

If you are on Facebook, you can find a “relocator” at this site: https://www.facebook.com/groups/FreeSnakeRemovalDirectory/announcements

Just zoom in on the Triangle area in North Carolina and you will find at least six people who are willing to come to your assistance for free. And in the meantime, enjoy the warm autumn days as we watch the beautiful fall leaves hit the ground and provide habitat for the insects which our birds and plants need.

Be the first to comment on "Relocate, don’t kill, snakes!"