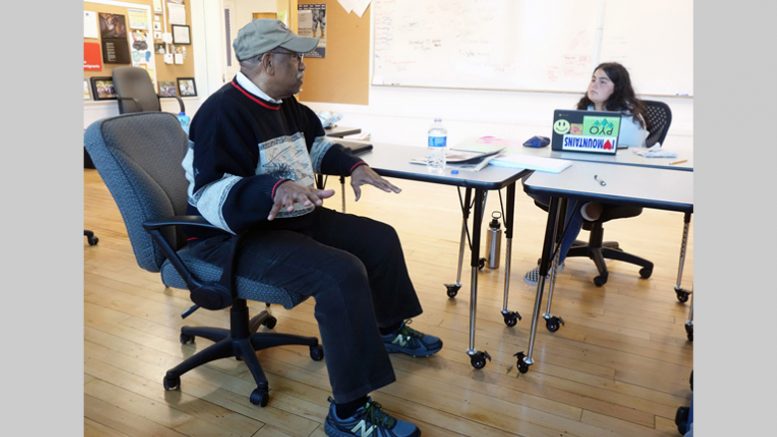 When LeRoy Walker Jr. started talking about flying, a change came over the 78-year-old retired IBM executive from Durham. His voice dropped, his eyes glazed slightly and a contented smile wreathed his handsome face, as he described the sight of the Piedmont towns and cities spread out below him on a clear night from 2,500 feet up.

Up until that moment, the classroom full of Durham high school students had been listening absently, some with their heads on their desks, others diddling with their cell phones.

But now LeRoy held them in his thrall: “When you’re up there, alone in the cockpit, just you and the airplane, the sound of the engine … ” he paused, as if he could hear it now, then resumed, “and spread out below you, the thousand twinkling lights of cars, towns and cities; it’s like you’re looking down at a blanket of stars … .”

We lost LeRoy earlier this month, and his passing still has me stumbling for the right words. The memory of his mentoring with the Durham high school kids and his sharing sessions with the minority teen writers at the Durham VOICE, our community newspaper, are still too/so fresh.

I met LeRoy only last year through the good works of the Sugar Valley Airport (SVA) community, a group of volunteers dedicated to service — and in particular to providing opportunities in aviation for minority kids. Located just west of Winston-Salem in rural Davie County, the SVA’s mission of service dovetailed perfectly with LeRoy’s vision.

As president of the Tuskegee Airmen Heart of Carolina Chapter, LeRoy was dedicated to getting minority kids interested in flying and associated careers in the aviation industry through a program called Young Eagles and an Aviation Academy which provided minority teens with flight experience in small aircraft.

All about the kids

When the good folks at SVA learned of LeRoy’s death, they responded. “LeRoy was all about the kids,” reflects Susan Park, a volunteer at the SVA, Todd Thornburg, another SVA volunteer, chimed in, “The volunteers at Sugar Valley Airport had the opportunity to partner with LeRoy on several occasions to help introduce the world of aviation to the youth of Durham, Greensboro and Winston-Salem. In this he was the great organizer and planner. To us, LeRoy was the embodiment of ‘Heart and Head.’ He considered all and gave his all in the hopes it would in some way serve the future. A natural teacher, LeRoy had an ability to engage the inner spark of young people. His vision was magnetic.”

Tom Freeman, aviation safety specialist with the NCDOT Division of Aviation, said, “When it comes to introducing kids to the world of aviation, LeRoy Walker was the man with the plan. LeRoy was a frequent visitor to Sugar Valley Airport, and when he introduced us to the Heart of Carolina chapter of the Tuskegee Airmen, we knew we wanted him on our team. On those Young Eagle days, LeRoy brought his whole self into the plans of the day. LeRoy was the master logistics officer for a number of beautifully facilitated and organized events held at SVA. His service to these important points of connection will not be forgotten, and we miss him greatly for his inspiration and leadership.”

SVA volunteer Sanford Danziger added, “It was wonderful to know LeRoy Walker. His enthusiasm and tireless work for aviation and youth development was inspiring. Being in his company always left me uplifted.”

“Rise Above.” Isn’t that what LeRoy had emblazoned on his khaki ball cap — along with a depiction of a WW II-era P-51 Mustang, the nimble fighter aircraft with the distinctive, red-painted tail so favored by the famed all-Black pilot squadron that LeRoy so admired? Rise above expectations. Rise above prejudice. Let no one keep you down. Rise.

LeRoy had just begun mentoring with our Durham VOICE teens last year, telling the saga of the improbable rise of the Tuskegee Airmen in WW II and how against all odds and systemic racism, the first Black military aviators in U.S. history, with the red-tailed fighter planes, displayed uncommon valor and heroism in air battles over western Europe, earning their place in history.

Leroy was planning on getting some of the VOICE kids up in an aircraft, not just for the fun and the thrill, but also to introduce them to a potential career in aviation.

Then came COVID — and that plan, along with so much else in life, was put on hold.

The same afternoon that I learned of LeRoy’s death, I was out puttering around in the backyard when a lone, single-engine airplane flew by high overhead. Heading into the setting sun it droned, slowly receding in sight and sound, until its image merged with the sunset and its drone, like a long bow on the bass string on a cello, drew out its final note into silence.

And the old gospel spiritual came to mind:

For more on the local chapter of the Tuskegee Airmen: https://www.open990.org/org/113746698/heart-of-carolina-chapter-tuskegee-airmen-inc/

For more on the Sugar Valley Airport: https://bit.ly/2Y74mKf