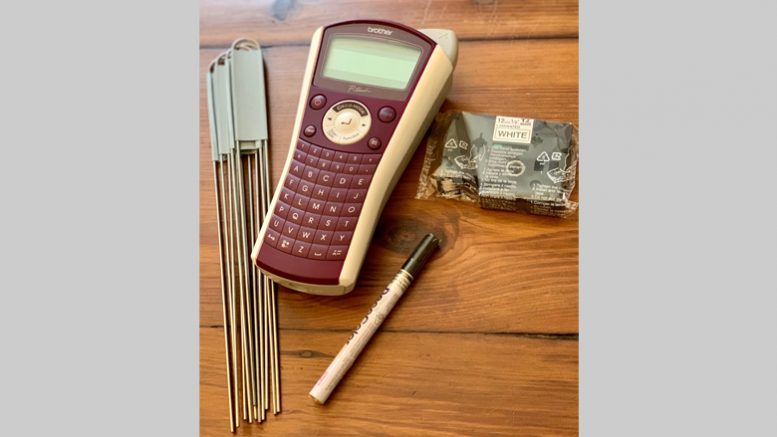 For years I struggled to find a good marking system for my plants. When I first started to garden, I had a large area to fill. Because there was a lovely daylily farm nearby, I began to plant daylilies without identifying them. My excuse was that it was hot (June in North Carolina typically is not cool) and I didn’t have time as I had so many daylilies I had to get into the ground.

As the years passed, I realized that I wanted to duplicate some of the daylilies — and I had no clue as to what they were. Gradually it dawned on me that I shouldn’t put any plant in the ground without identification, that it was just as important to know what plants didn’t do well for me as it was to recognize those plants that thrived.

By the time my rose mania engulfed me, I was well into unsuccessful plant markers. At one point I even bought 500 white plastic knives so I could write the names on the hilt. All this achieved was to have lots of white knife hilts pointing skyward with unreadable names on them. This is not a recommended garden adornment.

The ugly truth in the plant-marking business is that indelible markers do not work under the beating sun. Sharpies that can ruin clothing in an instant become feeble in the sun. Markers made for marking plant stakes ooze ink, creating blots suitable for a Rorschach test.

For those of you who tell yourself that you will remember the name of that particular rose, let me assure you that with the passing of the years that memory will fade. The nameless rose, nameless because by this time you have forgotten its name, will embarrass you when someone asks you for its name. You see, in the rose world, it is not acceptable to be unable to identify a rose in your yard. Roses, like people attending meetings, require nametags.

For those of you who are saying, “Who cares?”, I reply that one day you will pass a lily, savoring its fragrance, and will find yourself wondering about the nameless lily you managed to plant ten years ago.

The sad truth is this: What is so prevalent in our memory in September has disappeared by the following April.

There is help on the way. For the past several years I have been using a Brother label maker filled with a laminated tape that stands up to the outside elements. I then stick the name on a plant marker (my favorite is found here: everlastplantmarkers.com.

This method has worked pretty well although sometimes the plant marker has lost its identification because someone nameless has stepped on it while gardening. Sometimes the rose has so overwhelmed the marker that it can no longer be seen. In other words, my system works until it doesn’t work.

This year I’m trying something new: I’m investing in pre-printed nametags for my roses from harlane.com. I’m driven to this because I am giving a tour of my garden in May to a local garden club, a time when the roses will be in bloom. When asked, “What is the name of that rose?” instead of crawling on my hands to knees to find the bent marker, hopefully I’ll be able to read the name (in white letters against a dark background).

Whenever I buy plants, I use my label maker to churn out the name before planting them. Thus, if they don’t reappear in the spring, I know it because of the lonely marker. If the plant thrives under my care, it will eventually be awarded with a pre-printed marker.

Remember, in gardening we learn from both our successes and our failures. My advice is this: Get in the habit of labeling your plants — you’ll be glad you did.

The Garden of Wrath

Be the first to comment on "Remembrance of Plants Past"