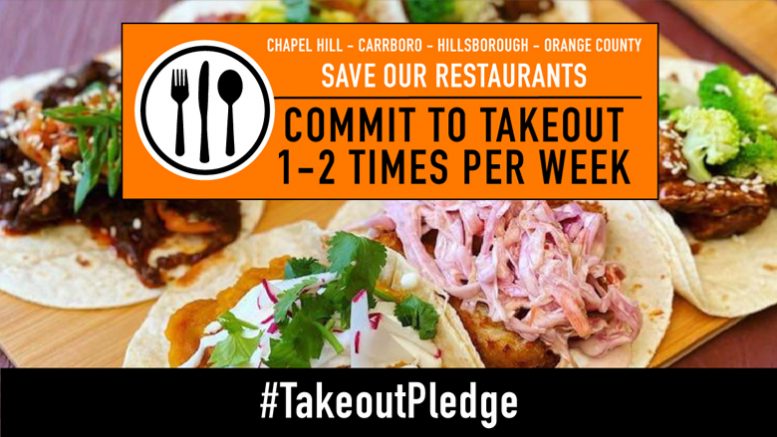 “We’ve heard nice reviews from many restaurants who tell us customers mention the campaign when dining in and taking out,” said Laurie Paolicelli, executive director of the Chapel Hill/Orange County Visitors Bureau.

“We saw a groundswell of local support for keeping our restaurants open. We heard compliments from Carolina Brewery, House at Gatewood Hillsborough, Imbibe, Al’s Burgers and more. It’s still tough out there and with the longer days just one month away, we hope folks will use it as a time to explore the outdoors, including our restaurants.”

Fifteen restaurants in Chapel Hill and Carrboro have closed since the onset of the coronavirus pandemic. “So, who’s closing permanently versus temporarily, it still remains to be seen,” Paolicelli said. “And they run the gamut from really beloved institutions, like Elmo’s, to City Kitchen at University Mall, and we’re on the line talking to ten more that are close to closing.”

The Save Our Restaurants Plan, launched in December, was designed to forestall further closures. The plan encouraged locals to make a “takeout pledge” by committing to order food twice a week and posting social media pictures of themselves wearing face masks while picking up their meals. Locals and visitors could also tag restaurants on social media and use the hashtag #takeoutpledge.

The plan was organized through a collaboration among the visitors bureau, the Chamber for a Greater Chapel Hill-Carrboro, Chapel Hill Downtown Partnership and economic development departments throughout the county. Restaurant owners had expressed concern about COVID-19’s impact during the winter months that are already prone to slower business. Because of the pandemic, they said, some potential customers are afraid to eat indoors, while others say it’s too cold to eat outside.

“Without takeout for the last nine months our doors would be permanently closed,” said Tommy Stann, owner and operator of Hillsborough BBQ in December. “The continued support will be even more important during the typically slow restaurant months of January and February.”

In a time of fear and tight finances, Paolicelli compared ordering takeout to an act of service. “We looked at takeout once or twice a week, and that’s an economic infusion into an industry that is really at the cusp of laying off their barebone staff,” Paolicelli said. “And these staff, the cooks, the waiters, the hostesses, all of the staff, are like one paycheck away from having a really difficult time surviving. And so, we didn’t want to look at it like going out to eat was a privilege. We wanted to look at it like going out to eat helps save these people from unemployment and real hardship with home and family.”

Despite local governments offering grants and zero or low-interest loans, federal programs did not provide enough protection for restaurants, said Paolicelli. As a result, many establishments had to shut down.

The threat of closure extends beyond Orange County. Forty-two percent of North Carolina restaurant owners said it was unlikely they would be open four months from now without additional relief packages from the federal government, according to a recent survey from the National Restaurant Association.

Even if a restaurant is able to stay open and has successfully encouraged takeout, its staff members don’t always reap the benefits, said local waitress Melissa DePierro.

The recent UNC graduate works at both Carolina Coffee Shop and Stoney River Steakhouse and Grill, for a total of 40 to 50 hours weekly. DePierro said she has mixed feelings about restaurants relying on takeout.

“It’s good in the sense that the restaurant is still getting business, but it’s bad for service workers because most of the time people don’t tip on to-go orders,” DePierro said. “So even though I’m still serving and making $2.13 an hour, people think that, for some reason, I’m getting paid more when they get a takeout order. Even though I box the food, prepare it for them.”

Although business can be slow at DePierro’s restaurants, important events such as the recent UNC-Duke basketball game lead to busy shifts.

“It was a lot busier than I expected, and I was honestly really worried about working because I saw the videos,” she said. “I was at work when everyone rushed Franklin, but it looked like probably 1,000 students, and I was worried they were gonna contaminate us.”

Why was she still working despite those fears? Financial concerns.

Although she pays her own rent and bills, DePierro’s parents claimed her as a dependent on their most recent tax form, so she has not received any stimulus checks. She also will not qualify for unemployment if she voluntarily stops working as a waitress. Since both restaurants are open, she would be considered as someone who has a job available.

Be the first to comment on "Restaurants Benefit from Campaign, but Staff Still Struggle"