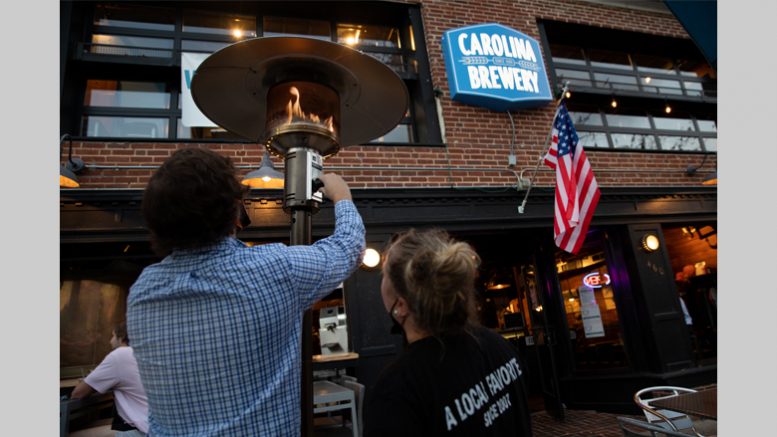 Local restaurants are bracing for looming cold weather and the possibility of less business because of customers’ worries about dining inside during the COVID-19 pandemic.

The fear is well-grounded. North Carolina has reported its highest daily count of COVID-19 cases during the past week. And Gov. Roy Cooper has extended Phase 3 of his reopening plan until Dec. 4, still limiting restaurant capacity to 50 percent.

To prepare, Sup Dogs on East Franklin Street bought heaters for its outdoor seating. Hannah Willcox, a manager at the restaurant, said that she has concerns about fewer customers, but tries not to dwell on those concerns.

Instead, she pointed out, the restaurant has seen an increase in take-out services since the pandemic began.

“We’ve always done a pretty good stream of Door Dashes,” Willcox said. “And we just signed with Uber Eats, too.”

Nevertheless, general manager Jason Gilbert said that he doubts customers who are concerned about the virus will come out. But he said he’s not overly worried about a downturn in sales because of changes in the weather.

“We have mild winters in North Carolina,” Gilbert said, “so there’s going to be plenty of days where we can open up our garage doors that open up from our building to Franklin Street. We can open those up at any given time when the weather’s nice and people can sit outside.”

Elaine’s nearby began its phased reopening the first week of October after halting service at the end of March. “A lot of businesses around us were (opening),” manager Brian Murphy said. “And we want to get back into the swing of things and try to save the business more than anything. We went eight months without any sales, which is a struggle for any business, especially here on Franklin Street.” Murphy said that he tracked down elusive, $200 heaters for outdoor seating, and first put them to use the weekend of Nov. 6.

“Most places are saying they’re out of them, and they’re hard to come by,” Murphy said. “So, we were fortunate to be able to get these.”

Elaine’s normally would put tablecloths over wooden patio tables, but instead the restaurant refinished the tables with a new top to cut costs and help with usability.

“[The new tops] allow us to use the tables outside without having to use tablecloths, and then put the finish on them that can get wet and all we do is just sanitize them down,” said Murphy. It’s pretty easy. Spending a dollar on a tablecloth, each table, gets up there.”

Julie Jennings, the wife of Elaine’s chef/owner Bret Jennings, is the owner of Uniquities, the store besides the restaurant. Murphy said “she wouldn’t mind if we slid four more tables over on that side.”

But if Elaine’s were to do so, they might need more heaters. Murphy said that it will be a challenge when the colder weather comes to keep all diners spaced out, but still close enough to the heaters.

“When that time comes, we may just have to put [the heaters] together and have even a smaller [dining] area,” he pointed out. “So, it’s going to be a challenge. We haven’t really got there yet.”

Who is Running for Office in the 2021 Election?

Be the first to comment on "Restaurants Brace for the Cold"