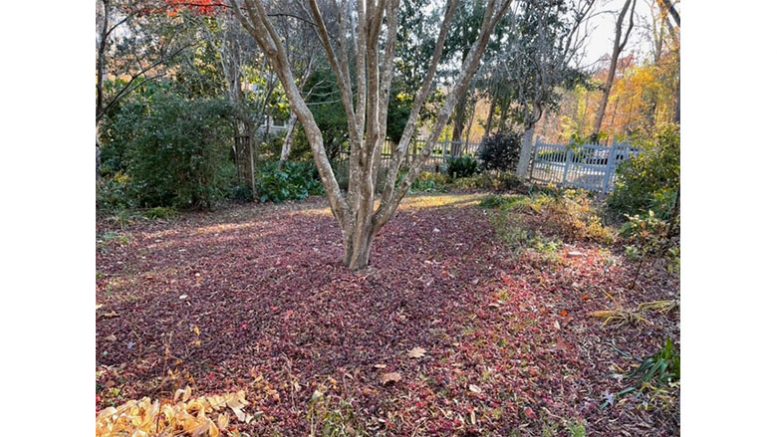 Good mulch for the perennial borders. Photo by Kit Flynn.

Sooner or later, all garden writers end up writing about mulch – and I am no exception. I’ve written about mulch before and, undoubtedly, I will discuss it again because it’s such an important part of gardening.

Good conscientious gardeners are consumed with their soil quality and the type of mulch they prefer. Bryce Lane, retired garden lecturer extraordinaire, once uttered in a presentation a sentence I have never forgotten: The single best way to improve your soil is by adding a layer of organic mulch. As soon as it’s laid down, microbes in the soil will begin to break it down, eventually turning it into that magic word: compost.

Now your garden is only as good as your soil – a truism that quickly pushes gardeners back to the basic ABCs of gardening: Feed the soil so the soil can feed the plants. Feeding the soil does not mean you should be spreading fertilizer around whenever the whim strikes you.

Now when we are talking about amending our soils, we are really discussing the top 6 inches of soil as roots rarely extend deeper than that measure. Most of us in the Piedmont have clay soil (versus the sandy soils east of Raleigh) with small soil particles that are excellent for holding onto the water in the soil. This is great during a drought but not so great during periods of great rainfall such as we experienced last winter. Deprived of oxygen, plant roots cannot survive.

You might be thinking, “Wait! Wouldn’t it be less labor intensive if I applied an elegant, inorganic mulch that wouldn’t have to be replaced?” Doing so defeats the whole purpose of mulch. We want the mulch to break down precisely because this is one of the best and quickest ways to change soil texture.

Our aim is not to turn our clay soils into sandy soils or vice versa. What we are aiming for is loamy earth. We don’t want the water to drain rapidly away (as it does in sandy soils) but neither do we want it to sit permanently in the soil, thereby depriving the roots of necessary oxygen.

What type of mulch is best? Pine straw is widely available – but it makes a terrible mulch as it’s rather unattractive, it doesn’t break down quickly and is highly acidic.

Tony Avent of Plant Delights advocates hardwood nuggets while advising against using pine bark nuggets because with a good rain they can simply float away. Good mulch in a couple of weeks. Photo by Kit Flynn.

However, as Tony points out, the most cost-effective mulch is the one nature gives to us every year. All those leaves you carefully blow to the curbside could be improving your soil instead. There is a reason Nancy Goodwin has Hillsborough drop off its leaf collection to Montrose while the local authorities deliver their leaves to Tony’s Juniper Level Botanic Garden.

If the leaves are large, you can run a lawnmower over them to break them up before blowing them onto the perennial border and plantings. Not all leaves are suitable mulch; send thick heavy leaves, such as magnolia leaves, to the curbside as it takes forever for the microbes to break them down.

If your plants begin to look a little peaked while the microbes are expending their energy breaking down the mulch you just spread out, please don’t rush to apply that box of fertilizer. This is where you need a soil test as it’s impossible to know the makeup of your soil without one. Yes, you have to go to the local Extension Center to pick up the boxes for your samples. Soil test submissions are free during most of the year and there is a $4 per sample charge during peak season, which runs Dec. 1-March 31.

Why is a soil test important? Because you need to know whether your soil is lacking in any of the essential or minimal nutrients. Too much of one is not a good thing. I used to spread Epsom salts around my roses until I learned that by doing so, I was adding a lot of magnesium to my soil. Too much magnesium in the soil is detritus, not a good thing for healthy soil.

Go to www.ncagr.gov/agronomi/uyrst.htm for good information on the value of soil testing. Begin the process of building up your soil by applying a lovely thin layer of organic mulch and get that soil test. Before you know it, you will have a lovely, loamy soil – and you will be the envy of your neighbors.