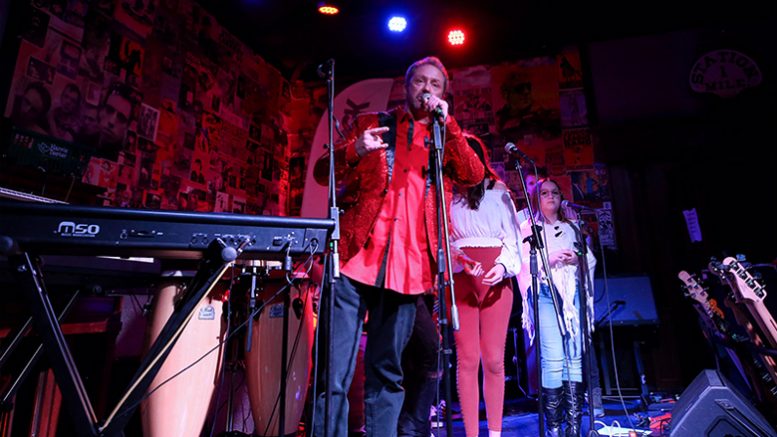 I first met David Joseph, owner of School of Rock, when our kids attended Scroggs Elementary together. In my job as the Visitors Bureau director, I was inspired by the quiz show called “Are You Smarter than a 5th Grader?” I brought the idea to their 5th grade class and asked the students to show me how they would “brand” Chapel Hill. I wondered if they were smarter than our creative team.

The clear winner was David’s son, Chris, who, with his dad, set out to produce a video about all their favorite spots in the southern part of Heaven. Dad was the cameraman; son was the on-air talent, stuffy nose and all. They were natural performers and techies and they won the contest, hands down.

Years later, when I learned David had opened a school to teach kids about music, School of Rock Chapel Hill, I wasn’t completely surprised. But I wondered how – and why – a successful SAS tech executive would walk away from a 17-year long career at one of the most prestigious software companies in the world to operate a school that involved lots of kids playing electric guitars, pounding on drums and singing with abandon into amped-up microphones.

Recently I sat down with David and was reminded what it is that makes me love Orange County so much. It’s the people who want to give back and who make it a priority to do so that makes this place so special.

Such is the case with David, son of an Episcopal priest, father of two, musician and a man who one day realized that he wanted to share the gift that got him through his younger years: the healing power of music.

The School of Rock franchise began in 1998, founded by Paul Green, a music teacher in Philadelphia who realized that the students who played as a group learned faster and better than the ones who did the traditional one-on-one lessons. He adapted his teaching plans to include group practice, with the end goal to have them play onstage in front of an audience. The program started to grow, the movie “School of Rock” starring Jack Black was released, and franchise locations popped up across the country and the world. Like Paul Green, David was drawn to the belief that music is a powerful force uniting human beings, especially youth, many of whom are trying to find their voice and ways to express themselves.

David has created a safe, professional environment where kids can find their tribe. Every student who walks through the door is greeted by name. Canned music plays over speakers, but it’s usually drowned out by groups practicing down the hall.

The doors to the unisex bathrooms are labeled “Rockers” and “Rollers.” Kids are encouraged to decorate the bathroom walls, writing names and song lyrics or whatever they want, provided it’s clean and age appropriate. Outside of the bathrooms, one wall displays a list of student and staff birthdays, while another is filling up with paper “bricks.” Every time the kids play a concert, they write about it, adding “another brick in the wall.” One student summed up part of what’s so special about School of Rock when she sent her goodbye letter to parents and the team: “Thank you… for patiently teaching me about music, from equipment, to theory, and everything in between… I now know that thingy that makes the guitar sound like “waaa-waa” is in fact called a Wah Pedal. I know how to set up and break down a stage (for the most part.) I know how to build a guitar (and even almost finish it!) Thank you for all the non-music things you’ve taught me, as well, like how to truly be yourself, pursue your dreams, and share your talents and passions.”

What David has taught me – and what he teaches his students – is that music is a language all its own, one that can be understood and appreciated by everybody, and that giving back to the place and people you love is like a beautiful song. Something else is clear, too: rock-and-roll – not that you ever doubted it – is here to stay. And you don’t have to be a 5th grader to know it.

Mid-Season highlights from The Best of Queen, 2000’s Indy Rock, and The Best of Santana / Hendrix! Plus our House Band and Rock 101ers! FREE and Open to the Public. Not to be missed!