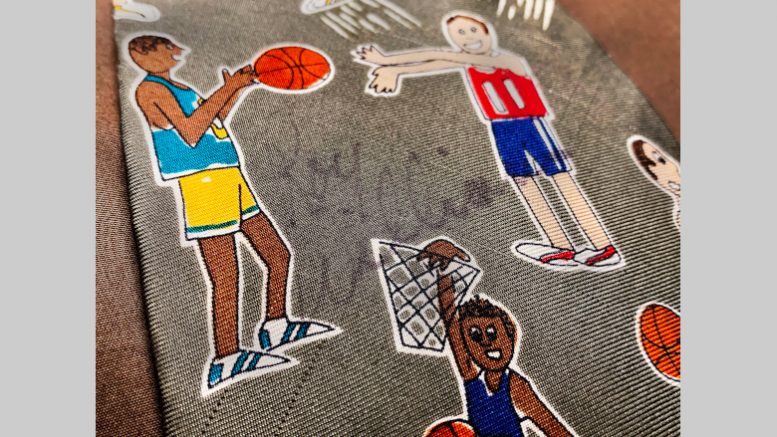 “True kindness is a strong, genuine warm way of being. This is also the Dalai Lama’s philosophy, ‘Kindness is my religion,’…It is like E=mc² of the Spirit.”

—Piero Ferrucci
The Power of Kindness: The Unexpected Benefits of Leading a Compassionate Life

It’s there. You just have to look closely. Faded after all these years, the unmistakable signature.

There it is now between the three basketball players on my old “Save the Children” wide belly-warmer of a tie from the early 2000s.

Make it darker with a Sharpie? Enhance it with Photoshop?

Are you kidding? Let the signature be as honest as the man who gave it to me.

But before both man and autograph fade, let me share the backstory.

Unbeknownst to many, Ol’ Roy, humble to a fault, earned a master’s degree in education from UNC back in 1973.

Years later, in 2007, when the UNC School of Education honored Roy as one of their distinguished alumni, he invited his old high school basketball coach, Buddy Baldwin of T.C. Roberson High School in Asheville, whom Roy insisted be on the stage at the Alumni Center so he could pay tribute to the man. Roy said, “I wouldn’t be here today if it weren’t for him.”

Employed by the Ed School to take the ceremonial photos of the event, I devised a plan. It took a special tie, a Sharpie, some fast talking and a little luck. As soon as I’d finished making the posed photo of the honorees, I approached Coach Williams, saying nothing, but held out my tie and the Sharpie. The Hall of Fame coach looked at me questioningly for a second, then grinned and said in his distinctive mountain drawl: “You don’t want me to mess up a perfectly good tie, do you?”

And with that, he honored me with his autograph.

Stopping to help a neighborhood kid

This second example of Roy’s kindness comes from my wife, Lynne, who remembers the man as a neighbor in Heritage Hills back in the late ‘70s when he was a new assistant coach to Dean Smith, making a pittance of a salary, supplementing his income by selling calendars statewide and with his wife, Wanda, taking care of preschool kids at their house.

Additionally, you need to know that this event occurred 14 years before Lynne and I met. So, now I’ll let Lynne tell her story.

When my son, Brian, was about 7 years old, we lived in Heritage Hills here in Chapel Hill. He was riding his bicycle around the neighborhood when he fell off his bike and the chain came off. Brian was upset because he loved to bike and thought his bike had broken. This happened in front of Roy Williams’ house. Roy came out of the house, not knowing my son or me, and put the chain back on the bike and then walked my son about a half-mile back to our house on the other side of Heritage Hills.  I knew who Roy was. Roy took time out of his busy schedule to make sure my son was OK. What a great man! I thanked him profusely, and he just walked back to his house. My son, Brian, who is now 48, still remembers that day.

To me, these two separate random acts of kindness, 27 years apart and independently verified, speak volumes about the character of Roy, his deep-seated capacity for empathy and his consistent concern for the human condition and how he impacts peoples’ lives for the better — whether it be acknowledging a fan with an autograph or fixing a kid’s bike.

Thanks, Coach, from us both.