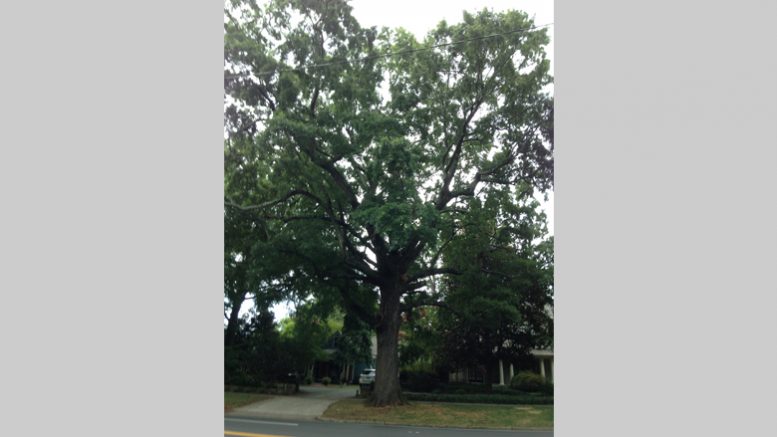 Chapel Hill’s Parks and Recreation Department sent word that it was hosting a gathering for people to pay their respects to a nearly 100-year-old willow oak on Franklin Street before it was removed. As this was the closest thing to a party I’d been invited to in months, I put it in my calendar.

I called Kevin Robinson, superintendent of park maintenance, to RSVP, because the town has adopted the county’s COVID-19 safety guidelines of no more than 25 people for an outdoor event. He said he would bring masks for guests who showed up without one.

We needn’t have worried about exceeding capacity. Perhaps because a heat advisory had been in effect for days or because the gathering did not include refreshments, the turnout was quite modest. All four of us arrived wearing masks. We joined Robinson, arborist Adam Smith, park maintenance supervisor Tanner Thompson and Sajid Hassan of Public Works under the massive branches of the willow oak in front of 516 East Franklin.

Trees matter in Chapel Hill. It’s the second most common reason people say they move to town (schools being No. 1). And we have some massive, ancient ones. When any are cut down, people object, question and mourn. So, Parks and Rec has taken to holding sessions to show what arborists see in recognizing a distressed or diseased tree.

In the late 1930s, the federal government gave grants to incentivize cities to plant trees. Durham received a grant and planted some 2,000 trees. Chapel Hill got no federal money but planted trees anyway, creating an arboreal baby boom along Franklin Street. Now they are all aging out at the same time.

A willow oak growing in the wild might live 200 years or more. But an urban environment cuts its life by more than half. Concrete interferes with the natural fertilizer that comes from leaves falling to the ground over the root bed and decaying into nutrients. Compacted soil hurts its oxygen intake, and streetlights interfere with its sleep. By age 80, it becomes more susceptible to disease and has a harder time recovering from injuries.

Smith has 30 or so certificates and licenses that make him good at his job, and he passes along what he’s learned to the two other staff members who work directly with him.

They go out “looking for trouble,” he said, alert to signs of disease and distress before a tree drops a huge limb that could damage property or kill someone. They may apply mitigation strategies to reduce heavy limbs and foliage. A sonogram will tell them whether there’s any rot in the core.

When a large limb breaks off, arboreal EMTs are on call around the clock to gas up their chain saws and start the removal.

When a tree has to come down, Smith and his staff plant a new one around Arbor Day, when the weather is cool and the new tree has an easier time adjusting. They plant a variety of trees, depending on the location: oaks and maples, where there is room for the roots to spread out, and shorter understory trees near power lines.

Smith knows that roots are stronger than sidewalks. The developer of Southern Village chose sycamores that thrive in suburban New Jersey where he grew up. But in the high-density cluster development of Southern Village, the trees broke through the sidewalk and struggled to survive. Slowly and steadily, they are being replaced with hardier varieties.

Once a tree is cut down — an expensive undertaking; the willow oak in front of 516 East Franklin would cost about $7,000 if a private tree service removed it — the town must dispose of its remains. The landfill won’t take any limb larger than 10 inches in diameter. A wood chipper can handle up to 18 inches in diameter, and the tree at 516 would produce maybe three truckloads of mulch. State law prevents the town from making any “profit” from the wood, so staff can’t give it away to the needy as firewood.

Once the tree comes down on July 28, its trunk, six feet in diameter, and large limbs will be squirreled away in a secret spot to dry and await some construction use by the town.

Perhaps the new police station will get an oak-paneled conference room.