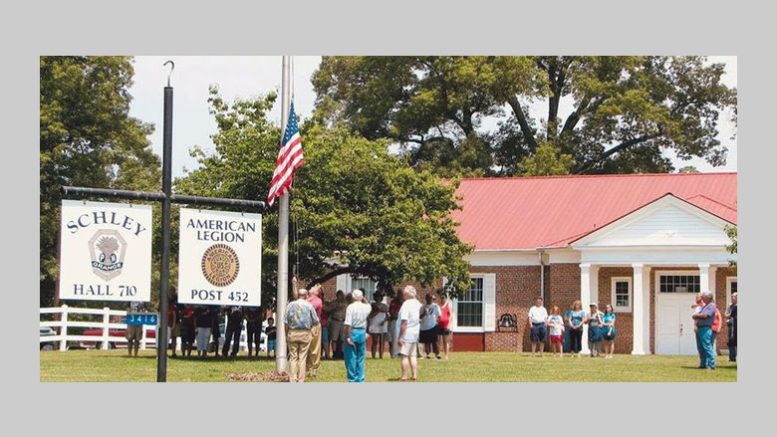 There’s a story behind every historic marker too rich and deep to fit on the plaque. Last year the National Trust for Historic Preservation designated Schley Grange Hall a historic site. This award will be celebrated September 12, 2021.

Schley Grange is in the Schley (pronounced “sly”) Community, about 6 miles north of Hillsborough, NC. They are a chapter of the NC State Grange and National Grange organization, serving the local farm community. A grange is a social organization that encourages families to band together to promote the economic and political well-being of the community and agriculture.

The North Carolina Grange was officially recognized in 1875 but hit its stride after re-organizing in 1929. The war was over, the Depression had ended, and our state’s isolated farm families needed a place to come together. Through local events, education, renewed community spirit, and the encouragement to be more tolerant of others with different political and religious beliefs, the Grange helped neighbors and communities come together. The Grange helped struggling families get back on their feet through training and cooperative buying and selling among members. When schools needed help, the Grange stepped in there too. The late Peter Kramer was a member of Orange County’s Schley Grange. Peter was a transplant from Westchester County New York, and not the type of man you’d associate with Grange Hall. Jewish, from a toney suburb of New York, he was a Duke graduate and progressive liberal. Peter used his Bar Mitzvah money to buy a farm in Northern Orange and join the Grange to learn from other farmers.

Former Duke classmate Steven Ray Miller was a friend of Peter’s. “Peter always saw the greater good and vision of community working together to help others,” he says, “regardless of their politics, religion, and experience in farming. He was committed to helping others and he got great solace from the fellowship he found at the Grange.”

“When the Schley Grange Hall was listed on the National Register of Historic Places in April 2020, marking the culmination of a multi-year project carried out jointly by the Grange and the Orange County Historic Preservation Commission, it was Peter Kramer that many members thanked: he planted the seed for the project in 2013,” said Peter Sandbeck, the Cultural Resources Coordinator for Orange County who worked hard to bring this project to fruition. Grange members held a special “oral history day” at the Grange Hall in late 2018 to share their stories about the Grange with a consultant. Longtime members also brought their photo albums and scrapbooks detailing the colorful history of how the small group of 64 members at Schley managed to win first prize in a national competition of almost 1400 local Granges. “Armed with this wealth of documentary materials, the consultant prepared a detailed National Register nomination report that was reviewed at the state level by the NC State Historic Preservation Office and ultimately approved by the National Park Service, which oversees the program,” confirmed Sandbeck. For years, musicians have gathered in Schley to take turns playing and singing old country and gospel songs.

This was a significant victory. The National Register is the nation’s official list of buildings, structures, objects, sites, and districts worthy of preservation for their significance in American history, architecture, archaeology, and culture. There are now 46 individual properties on the National Register in the County, along with seven Historic Districts including those in Chapel Hill and Hillsborough.

To this day the volunteers from Grange give their time to the Schley community. It’s people like them and the late Peter Kramer who accomplish so much with almost no fanfare because that’s not what they’re after. Their goal is a stronger community, better schools, and a comfortable life for residents, old-fashioned values that continue to resonate today. In December 2019, Catherine Cheek (above) stepped down after 38 years as president of Schley Grange. David Latta, a teacher at Orange High School and leader in the Northern Orange agricultural now serves as President.

This honorary designation is about so much more than it appears to be. It’s about the genealogy of commitment to serve, by those still with us and those who have left. It’s a testament to their memory and evidence of our community’s desire to preserve the best of what we have and who we are.

Please join the fun at Schley Grange Hall on Sunday, September 12 between 2 pm and 4 pm. Visit outside with neighbors and friends at your leisure. At 2:15 p.m. there will be brief remarks by Grange officers, and other special guests recognizing the community. A special unveiling will also be presented. Safety protocols are to be in place.