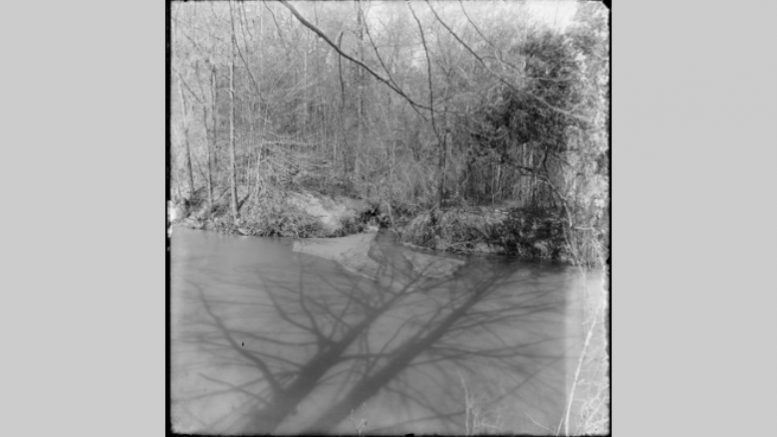 One of Collier Cobb’s photographs (1902) showing the confluence of Meeting of the Waters creek with Morgan creek.

A STORY OF OUR HISTORY

Scott’s Hole was apparently a well-known swimming hole that students (and probably some faculty and townspeople) used for bathing when the weather was warm, from at least 1820 until about 1920. It was named, according to Kemp Battle’s “History of the University of North Carolina,” “from a man drowned in it.”

There is no record of Mr. Scott who drowned, but according to James Vickers’ “Chapel Hill – An Illustrated History,” John Scott had a store somewhere on Franklin Street as early as 1798 and his widow, Caroline, was involved in a boarding house sometime after 1827. Could this be the Scott who drowned? We may never know for sure.

We also can’t be sure of the exact location of Scott’s Hole. It is mentioned 19 times in the Rev. James Pleasant Mason’s diary, between 1876 and 1892. Several entries confirm that it was used for swimming, but none help in identifying its exact location, other than indicating that it was on his land.

In a 1878 Raleigh Observer article, Cornelia Phillips Spencer describes a walk she took with Kemp Battle.

“The new stream thus formed (now Meeting of the Waters creek) runs for two miles south through unbroken forest lands belonging to the Morgan family, and enters the large Morgan creek at the well-known fishing spot called Scott’s Hole, where in the old, old days was once an Indian village. … Surmounting the hill and striking west we fell in with the Cave Mill road (now Kings Mill) which led us northwest to the Pittsboro Road.”

Today, the primary importance of Scott’s Hole location is as a marker for plant species that Elisha Mitchell and others collected for the UNC Herbarium. According to the research of Peter White, former director of the North Carolina Botanical Garden, Scott’s Hole was a location on a road that went from the “cemetery” to Scott’s Hole and beyond.

The road along the edge of Scott’s Hole was at least on the east side; there are references to both an Upper Road and a Lower Road to Scott’s Hole. There was a ford adjacent to Scott’s Hole (probably just west of the current bridge to the OWASA sewer plant, judging from old maps). The problem with the photographs is that there is no hole. Morgan Creek is very shallow at that spot, even in 1902.

Very little is known about the dam on Meetings of the Waters Creek. Some have called it a mill dam, but careful examination suggests it was not. The dam was built in two stages, a lower rock dam and an upper earth addition that probably reached 12-feet high.

At 12 feet, the pond behind it could have reached to or near the new botanical garden buildings and been large and deep enough to qualify as a swimming hole. If this is the Scott’s Hole, then the dam was built before 1820, the time of the earliest citations. It probably existed as late as 1902 (Collier Cobb, Sr. photographs) and perhaps longer (herbarium citations in 1922 and 1940).

The massive flood of Sunday, Aug. 3, 1924, washed away bridges and embankments and the Morgan Creek mill dams, Purefoy’s and Kings Mill. It could well have destroyed the Meeting of the Waters dam as well, ending the presence of Scott’s Hole.

This is the first of an occasional series of articles on the history of Chapel Hill, its people, places and events, from the founding of the town up to the present.

Information for this article is drawn from a book about the history of the KingsMill/Morgan Creek neighborhood that the Chapel Hill Historical Society plans to publish this winter. A YouTube presentation about this project is available on the society’s past programs webpage at https://www.chapelhillhistoricalsociety.org/cpage.php?pt=5.

Carl Anderson is a board member of the society.

The State Needs a Progressive Force