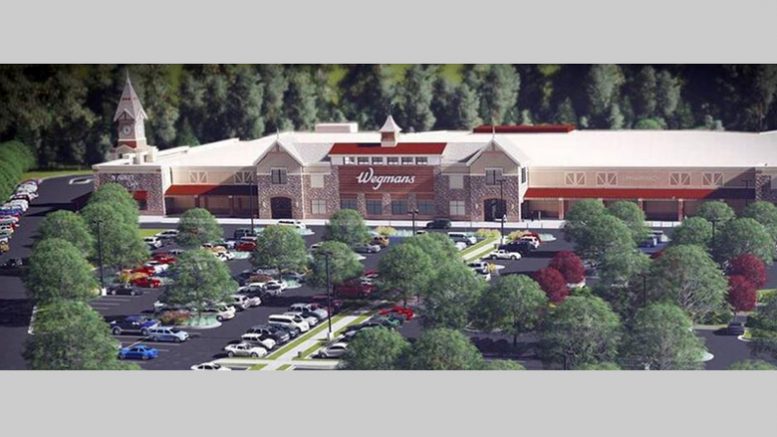 Wegmans Chapel Hill to open early 2021, now hiring
Wegmans is set to open in early 2021 in Chapel Hill. The supermarket will be located between US Interstate 40 and Highway 15-501 at the former site of Performance Auto Mall. The 99,000 sq. ft. store will have 740 parking spaces and include a delicious array of food options including a restaurant foods section, sushi bar, fresh produce, seafood, and so much more for customers to enjoy while in Chapel Hill. Wegmans will be hiring 375 employees to become a part of the Chapel Hill team. Apply online today at: https://jobs.wegmans.com/chapel-hill

Parts of Franklin Street now features walking and outdoor dining
Chapel Hill is now using its downtown public sidewalks for outdoor retail sales and restaurant seating. Restaurants and retail businesses on public sidewalks and rights-of-way are following social distancing recommendations for spacing, cleaning outdoor areas. As an added feature, the town added pedestrian walkways on Franklin Street to give residents and visitors added room to stroll. Franklin Street is the latest in the country to partially close and create more space for pedestrians and outdoor diners. Businesses that serve food in Orange County communities (Chapel Hill, Hillsborough, and Carrboro) were required this month to limit food sales and stop selling alcohol starting at 10 p.m. See you downtown.

Carolina Donor Services chooses Chapel Hill for new 58,000 sq foot facility
Carolina Donor Services is building and will relocate to a 58,000-square-foot facility on 9.7 acres in Chapel Hill. Currently located in Durham, Carolina Donor Services spent $2.3 million for the site at 1720 Millhouse Road. Director of Marketing and Communications Chuck Heald attributes the growth to the organization’s rapid success. He said much of the larger facility will come from adding recovery suites, which will enable the recovery of both tissue and organs. “In the place we are now, we have only one recovery suite,” Heald said. “And we’re only doing tissue. So, we can only do the recovery on one tissue donor at a time.” Colonial Inn Hillsborough Updates
If the walls at the Colonial Inn could talk, they would likely be gushing over all the changes, renovations, and the anticipation of once again being the center jewel of King Street in Hillsborough. Elise Tyler, key manager during this transition, gave the industry an update of the 17,300-sqare-foot site and a lot has been happening. Fireplace mantles, baseboards and door frames are being primed and painted. Spots and lines of spackling have been smoothed and sanded, and now await paint. The historic windows have been removed, restored, and placed back into their original setting. Floors are level and. Chic light fixtures hang, offering a hint of the eventual decor. “We hope to open in late 2020 or early 2021,” Tyler says. “It’s a question of what’s going to be happening with COVID-19 and we want to be sensitive to public gatherings of any kind.” Elise Tyler in the Event Space at Colonial Inn

Fitch Carrboro says there’s increased demand for lumber as home improvement projects soar
Lumber prices in the U.S. have steadily risen since the COVID-19 outbreak began, due to an increase in demand combined with lumber mill shutdowns. The price of lumber for September delivery rose 3.1% to an all-time high of $641.60 per thousand board feet, the Wall Street Journal reported.  “Construction has not slowed down one bit,” confirms David Fitch, president of the Fitch Lumber company that has been in Carrboro since 1923. “It’s as busy as you could imagine. Fitch Lumber, with about 35 employees, says many of his customers were home and “bored” and decided to start some home-improvement projects such as play houses, chicken coops, garden boxes.

Root Cellar Chapel Hill Hangs with Guy Fieri and the Food Network
Chef Sera Cuni, the co-owner of Chapel Hill’s The Root Cellar Cafe & Catering, made her debut on Food Network on Aug. 19, joining Guy Fieri’s food game show, “Guy’s Grocery Games. Having to create a spicy dish using nine ingredients starting with the letter “G,” Cuni made a spicy burger using ground beef, garlic bread, ghost pepper jam, goat cheese and Gochujang (Korean chili paste). She fell short, though, to Orlando’s Michael Collantes, who beat the rest to win the “Guy’s Grocery Games” challenge. Cuni, a Connecticut native, came to North Carolina in 2006 to work for Sara Foster at the Foster’s Market location in Chapel Hill. Cuni and her wife, Susan White, purchased that restaurant in 2013 and rebranded it as The Root Cellar a year later, expanding to Pittsboro in 2017. The Parkline Chapel Hill
The former Chapel Hill home of Blue Cross, one of the largest blocks of office space in the Triangle, is now available for lease. Renovations are now complete at the iconic structure on Fordham Boulevard, according to JLL Commercial Real Estate of Chicago. Blue Cross officially vacated the renamed Parkline building in 2016 after it was purchased by the State Employees Credit Union for just under $35 million in 2015.The glass-clad structure, situated on a 39-acre campus, abuts the future site of a Wegmans grocery. The Carrboro Music Festival is October 2022