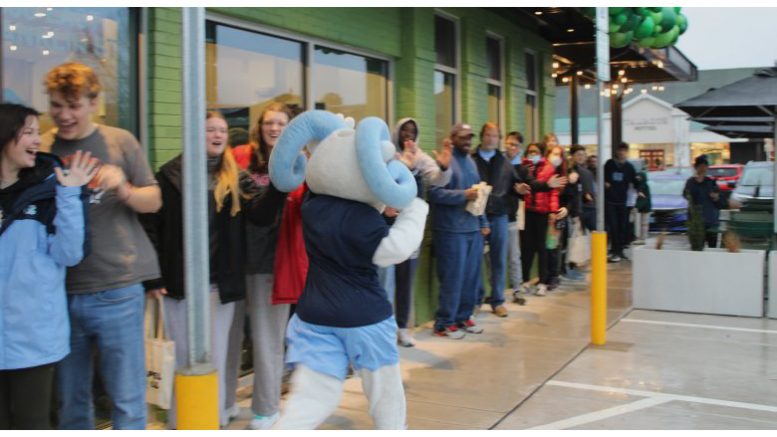 Rameses Jr. (RJ), son of UNC-Chapel Hill mascot Rameses, greeted about 55 people lined up for the grand opening of Shake Shack in Chapel Hill at 11 a.m. on Dec. 22. Photo by Michelle Cassell.

Never let it be said that Shake Shack, a fast casual restaurant chain, doesn’t have a devoted fan base. Its grand opening and ribbon cutting on Dec. 22 at 11 a.m. in the Eastgate Crossing shopping center found dozens in line waiting for entry, even on a cold, rainy morning. The first 100 guests to arrive received gift cards and limited edition Shake Shack gifts. Early arrivals Benjamin, left, and Marcus Gear of Chapel Hill were excited to get Shake Shack gift bags for being among the first 100 people to celebrate Shake Shack’s grand opening in Chapel Hill on Dec. 22. Photo by Michelle Cassell.

“This is awesome. I love Shake Shack!  Very happy it will be in Chapel Hill,” said Marcus Gear. They waited in line for about an hour before the doors opened.

The Gears weren’t alone. Early risers Laurie Baker and Patrick Apel of Chapel Hill were the first ones in line. The two and some friends had been there since 8:30 a.m., braving pouring rain and cold to ensure their place for prizes and food. Delight in their success was evident. Laurie Baker and Patrick Apel of Chapel Hill beam with happiness at being the first ones in line for the grand opening celebration of Shake Shack in Chapel Hill Dec. 22. Photo by Michelle Cassell.

The celebration included a presentation by Aaron Nelson, secretary and CEO of The Chamber for a Greater Chapel Hill-Carrboro, of a Chamber membership certificate to the new Shake Shack’s general manager, Adam Duncan. Nelson also provided congratulations on behalf of the Town of Chapel Hill. Aaron Nelson, secretary and CEO of the local Chamber, presents General Manager Adam Duncan with a certificate of membership in the Chamber for Shake Shack. Photo by Michelle Cassell.

Also on hand for the festivities, including the ribbon cutting, was Laura Malinchock, the board chair of PORCH Chapel Hill/Carrboro, a local hunger relief organization that has provided over $5 million in help to local residents since its founding in 2010. Shake Shack is donating $1 of every sandwich purchased on opening day to PORCH as part of its Stand for Something Good program. SHAKE IT UP! Shake Shack General Manager Adam Duncan (with giant scissors) is joined by staff and visitors in a rousing cheer at the grand opening and ribbon cutting of the new location in Chapel Hill on Dec. 22. Visible in the front row, from left to right: UNC-CH’s Rameses Jr. (RJ), Laura Malinchock from PORCH, Aaron Nelson from the local chamber of commerce, Duncan, Joanne Langley, Tina Jackson, Keayonna Knighten and Ashlee Amos. Photo by Michelle Cassell.