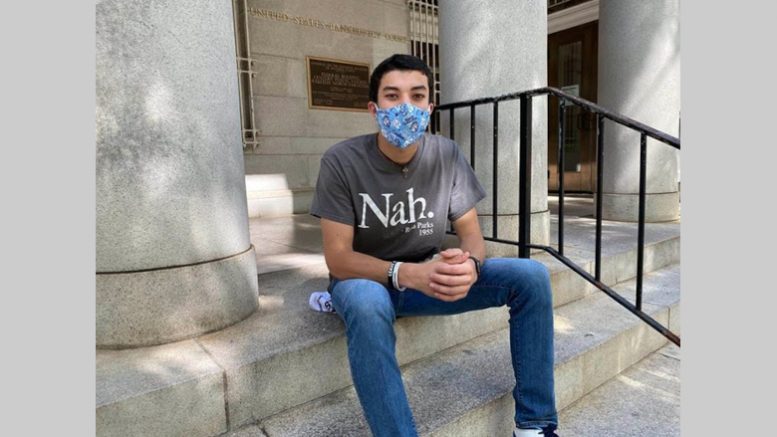 The generation that grew up with Black Lives Matter — increasingly activist, attuned to inequity, see George Floyd’s case as an orienting point for all their political values coming to life.

“Black Lives Matter definitely allowed us to put on the center of the conversation in public discourse the problem of mass incarceration, police brutality and the deep inequities that continue to persist,” says Dr. Johnny Hill, dean of the Divinity School at Shaw University.

Hill said the impact is huge. It is now putting young people, like Greear Webb, a student at the University of North Carolina at Chapel Hill, on the front lines of history. UNC sophomore Greear Webb has been appointed to a statewide committee geared toward youth justice led by Gov. Roy Cooper.

We asked this impressive University of North Carolina Chapel Hill student to give his thoughts on the movement, the future and doing the right thing.

“I often say that true change is comprised of three pillars: education, protest, and policy change.

As a young Black man in America, I was shaken to my core by the video of George Floyd’s death, and then again and again as the video is subsequently shared all day, every day, on national television.

However, George Floyd’s death did not surprise me in the slightest. Actor and rapper Will Smith accurately stated in a 2020 interview that racism is by no means new, it is just “getting filmed” and he is right—America has a history of brutalizing and ignoring the very existence of its Black people.

This striking reality, however, demonstrates exactly why the movement in support of Black life must continue to be placed at the forefront of our national psyche. These types of brutal attacks on the most marginalized Americans stem from systemic oppression, resulting in the blatant disregard for human life for no other reason than hate associated with the color of one’s skin. Not only is this despicable but it is preventable, only if we are all willing to play our part in the movement.

Though not everyone can be in the streets shouting and marching each time an injustice occurs, everyone can raise their voice and use their gifts to forward the cause of justice. The power held in the protests of summer 2020 lies upon the foundation of unity, given that unity cannot exist absent accountability. The first step in achieving accountability is education—the first pillar of true change. Particularly, many white Triangle residents chose to educate themselves following Floyd’s murder and stood in solidarity with those of us in Raleigh planning what to do next.

Protesting was next. The second step in achieving tangible change after better educating yourself is to challenge every instance of injustice you encounter. Last summer, for instance, many chose to reject racism and, by extension, police brutality by physically showing up in the streets, marching and chanting slogans of justice. Others chose to protest the status quo by supplying water and food to those walking along the hot streets, and others still chose to protest by writing and calling any and every person they knew in a position of power, demanding that they take a stance against police brutality and work to make their companies, neighborhoods, and families more antiracist. The final, and often hardest piece in the equation of attaining lasting change is that of policy change. What we must do now is act collectively to push our government officials to change policy to better reflect the demands formulated by the protestors of last summer, and those throughout American history.

Attending UNC and encountering students of all backgrounds and identities, from all pockets of the globe has allowed me to recognize just how bright our future can be when we are not afraid to take part in difficult discussions. Youth possess the unique tools necessary to dream of a better future—a future that is more equitable, inclusive, and full of opportunity for the historically marginalized among us.” Every child deserves a bright future. We must do better for the Black community. Be the first to comment on "Shaped by Black Lives Matter, UNC Student Greear Webb Watches Chauvin Trial and Asks: ‘What’s Next?’"