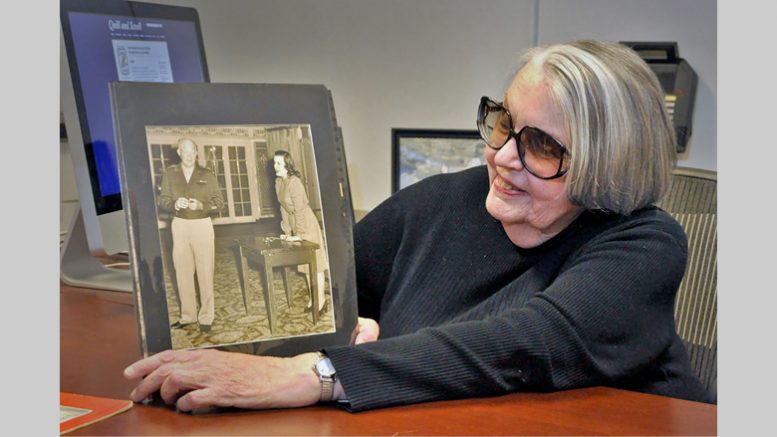 The young reporter leans into the interview, uncowed by the august presence of the hero of WW II D-Day, General Dwight D. Eisenhower. The year is 1947, and the kid reporter is Chapel Hill’s own Val Lauder, just 21 and already a star reporter for the Chicago Daily News.

This week we’re celebrating the 95th birthday of that veteran reporter and former UNC adjunct professor whom friends describe as “unstoppable.” Retired now after 31 years of teaching feature writing at the Hussman School of Journalism and Media, Val is still writing, most recently for the Saturday Evening Post.

Reporting for the late great Carrboro Citizen back in 2012, I had the chance to make this photograph and hear the backstory of her then new book, “The Back Page.”

She said that getting to meet and interview the luminaries of her times was just one of the perks of being a journalist. During her long tenure at the Chicago Daily News, she interviewed not only “Ike,” but also Frank Sinatra and many other notables of the day.

Val described the book as “my experiences — adventures — at a great American newspaper. This is not an academic kind of account of journalism at an earlier time. There’s a lot of humor in the pages, smiles, chuckles, laughter.” She described the book’s genesis: “A couple of summers ago I was not scheduled to teach summer school, and the idea sort of came to me of writing about my experiences at the Chicago Daily News, the historical figures I met, and the celebrities (during) a century of great events. I was aware as I wrote that I was sharing with readers another time.  We had typewriters, glue pots on the desks and telephones — some of them the old-fashioned, upright telephones sometimes called “candlestick” telephones. It was only when Tom Bowers (retired UNC J-School interim dean) read the manuscript and e-mailed me about it that I realized I had documented a time that has been lost, that the people who (now) work in cubicles with computers and carry cellphones have no awareness of that time or how we reacted to breaking news stories.”

As Steve Reiss, Enterprise Editor of The Washington Post, put it in his comment on the back of the book: “And best of all, it captures why anyone would work in these dirty, loud rooms with a deadline always hanging over your head: because it’s so much damn fun.” The book is available at Amazon.com, go to books, and search for “The Back Page” by Val Lauder.

In celebration of her birthday, some of Val’s former colleagues at the Hussman School of Journalism and Media sent tributary messages, beginning with retired long-time J-school Dean Emeritus Richard Cole, who writes: “How to describe Val in a few words? Unstoppable. She’s still writing at 95 and getting published in prestigious national publications like the Saturday Evening Post. She’s been a successful, untiring journalist all her life. And she instilled that same can-do spirit and talent in her students. They loved her.”

Rhonda Gibson, the James. H. Shumaker Term Professor, says of Val: “Professor Lauder’s feature writing class was wildly popular with our journalism students. Not only could Val write a great feature story herself, but she was also able to cultivate that talent within her students. She helped them develop both their writing skills and their confidence, and I’m still in awe of that.”

And this from Heidi Hennink-Kaminski, the Hugh Morton Distinguished Professor and senior associate dean for graduate studies: I’ll never forget driving to Chapel Hill to look for apartments and daycare the weekend after I accepted UNC’s job offer! It was Carolina’s spring break and Val was determined to help welcome me given others’ absence. We had a delightful lunch outdoors and learned of our Michigan connections.”

Associate Professor Deb Aikat remembers how Val ran a journalism contest at the J-School: “With punctilious precision, Val Lauder has led, with distinction, for more than 15 years, our collaborative judging of entries to the annual National Council of Farmer Cooperatives’ Cooperative (NCFC) Information Fair. Val would assign to our School’s 14 faculty judges NCFC entries in 40 competition categories. In her inimitable style, Val’s deadline reminder email would state: ‘A friendly reminder — flashing lights, backed by bells and whistles and foghorns!*#@ — that I’ll be in next Wednesday to collect entries and judging sheets to pack up and send up to NCFC.’ It is a sheer joy to see Val lead the NCFC judging, year after year. We have never missed a deadline.”

Former Interim Dean Tom Bowers writes, “Val is indomitable and has amazing recall of things that happened 70 or more years ago.”

Echoing that theme, Professor Emerita Jan Yopp says with a chuckle, “I want her memory when I’m 75  — let alone 95!” And then she adds, “Val has left an imprint on Chapel Hill that goes beyond her many years of teaching in the journalism school. She is a walking encyclopedia of facts related to classic movies. For many years she hosted classic movie night at the UNC General Alumni Association. She also has had a long-time association with the Chapel Hill Historical Society, designing the annual calendar and serving in multiple roles.

“She is still writing stories based on her memoir and memories that are published on the Saturday Evening Post Facebook page. So even at 95, she is staying active with her writing.

Be the first to comment on "She interviewed Gen. Dwight D. “Ike” Eisenhower in 1947"