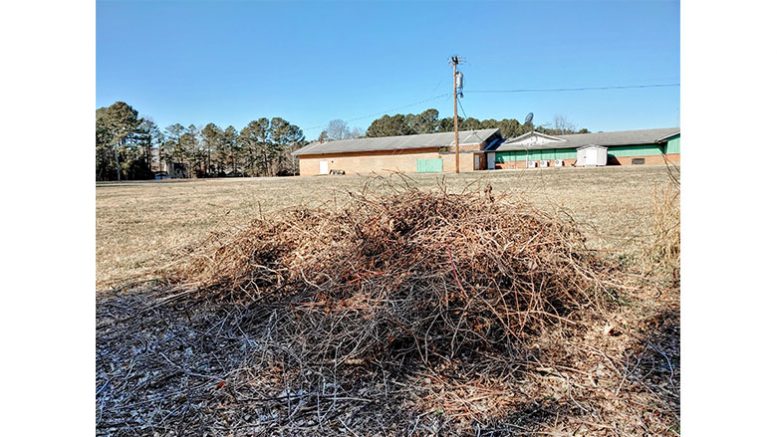 On a warm January afternoon following a weekend of snow and ice, Colony Woods residents Bill and Anne Brashear accompanied a local reporter on a tour of the Town-owned fields and woodland located at 1714 Legion Rd. in northeast Chapel Hill. Since spring 2020, under the auspices of Chapel Hill Parks and Recreation (CHPR), the Brashears have been leading a volunteer effort to remove invasive plant species from the property. About a dozen people participate on a regular basis and three local Scout troops periodically lend a hand. CHPR has contributed tools, gloves, fencing, debris removal, and has cut down dead trees too large for the volunteers to handle.

Anne says the project has been her “therapy” since the start of the pandemic.

“We call ourselves the Legion Park Volunteers,” Anne wrote in an email after the tour. “We use the term ‘park’ to highlight our desire for the Town to make the entire area a Community Park.”

The most prolific invasive species on the Legion Road property, as well as in much of the Town, are wisteria and kudzu. Because much of the 36-acre property is wooded and has been left largely untended for many decades, these invasive plants have thrived to the point where certain areas now feature what the Brashears referred to as “walls of wisteria.”

The Brashears pointed out wisteria branches as thick as an arm. “Imagine this field, 4 to 5 feet tall in wisteria,“ Bill said. “These areas that have trees were so covered [by wisteria], you couldn’t see under them.” Anne and Bill said that under all the wisteria and kudzu they found trees that were still living. “If you were to walk around in there, there’s a whole mat of all the intertwined wisteria,” said Diane Willis, a Colony Woods resident who participated in the tour.

“[Wisteria] is a tree that grows horizontally and then climbs up” Anne said. During the tour, the plant was clearly visible, spreading along the ground in every direction.

Bill said wisteria can be so thick that when the soil underneath it has eroded away, “You can walk on the wisteria without touching the ground.”

In addition to cutting and physically removing these invasive plants, the Brashears’ group were trained in the use of herbicides by staff from the Orange County Agricultural Extension Agency. They use a painstaking, conservative method that avoids spraying.

“Spraying has the potential to poison things you’re not after,” Bill said. “What we do is cut [the wisteria vine] off at the ground and put just a dab of poison on the stem. This is called the ‘cut ‘n paste’ method and must be done plant by plant. Other invasive species the volunteers have been working to eradicate include stiltgrass and tree of heaven. Bill said it’s crucial to apply herbicide to the stem of the latter plant because, “once you cut it, its roots will send up sprouts everywhere.”

Besides removing invasive species, the Brashears and their volunteer group have established native plants, trees and shrubs, such as buckeye and pawpaw. “If we plant something, it has to be native,” Anne said. The Brashears said that following the removal of invasive species from the site, there has been a resurgence of native trees and plants, as well as a return of local wildlife. They have also planted a butterfly garden. A ‘wall of wisteria.’ Photo by Anne Brashear. Clearing the wisteria and kudzu revealed many small trees that were still alive. Photo by Anne Brashear.

The Town purchased the property in 2016 from the American Legion Post 6 for $7.9 million. The purchase was the culmination of a yearlong campaign by town residents who wished to see the Town acquire the site, one of Chapel Hill’s few remaining large undeveloped parcels, and turn it into a community park.

The following year, the Town invited the public to participate in a planning exercise — a “charrette” — to envision how the land might be used. Many different uses were suggested, including conservation, indoor and outdoor recreation, civic and educational activities, and commercial and residential development. Colony Woods resident Dan Levine hopes that some of the site’s acreage will be used to provide housing for low- and moderate-income households. “I believe that affordable housing and a park are complementary uses for this very large piece of publicly-owned vacant land,” he wrote in an email to TLR. “It’s disappointing that a handful of parks supporters state that the site must be solely a park. Every affordable housing advocate I know agrees that a park and housing would go together well, especially given the site is 36 acres and abuts existing parkland at Ephesus Park and the elementary school’s publicly available athletic fields and playgrounds. This site is next to public transit, close to jobs and services… that will make it a wonderful place for lower-income residents to live. It’s also one of the relatively few sites in town that scores well for the state’s Low-Income Housing Tax Credit criteria.”

“I want affordable housing in my neighborhood,” he wrote, and cited the Town government’s calculation that Chapel Hill has a more than 3,000-unit shortage of housing accessible to those earning less than 60% of the area median income.

The area around the Legion property currently has three publicly-subsidized affordable housing communities. The Town-owned Colony Woods West neighborhood, adjacent to the Legion property, includes 30 units of older duplex housing. In addition, in 2014, the Town donated 8.5 acres on the west side of Legion Road, land previously earmarked for expansion of the municipal cemetery, to affordable housing developer DHIC. DHIC subsequently built Greenfield Place and Greenfield Commons on the site, which together provide 149 apartment units designated for low- and moderate-income households.

Diane Willis said that development of the property is limited by its site conditions. For example, almost a quarter of the land — 8.6 acres — consists of streams, stream buffers, marshy areas and steep slopes, which, by Town ordinance, cannot be disturbed or built on. Because development of other parts of the property likely would entail clearing trees from some of the land, residents have raised concerns about the impact of such development on downstream flooding. Willis said that mature trees absorb large volumes of water from the soil.

“If you cut them down to build anything, you’re taking away some of what holds the soil,” she said. “[The soil] is underlain by clay — this is all Triassic sedimentation —and clay doesn’t drain.”

“If you follow the creek down,” Bill Brashear said, “it goes under Ephesus Road. Just this side of Ephesus Road are several houses that are in the 100-year flood plain. So, if you develop anything more up here, you’re going to flood the houses down there. It’s going to cost the city money to repair damages.” Volunteers planting a butterfly garden on the Legion property during summer 2021. Courtesy of Hongbin Gu.

The Brashears and their volunteer group are not the only ones working to improve the Legion property. Last summer, the Town sponsored an effort by several local school and community groups to establish a pollinator garden on the site. CHPR provided soil, mulch and gardening tools and worked with members of the Monarch Butterfly Club of East Chapel Hill High, the Chinese School of Chapel Hill and the Chinese-American Friendship Association of North Carolina to create a 1600-square-foot garden containing 260 milkweed and 120 nectar plants meant to attract monarch butterflies.

“It was a delightful surprise to us,” Bill Brashear said.

Due in part to the pandemic, land-use planning for the site has not progressed much since a council-appointed task force submitted its report in 2017.

According to Director of Parks & Recreation Philip Fleischmann, the site is currently utilized for “passive recreation,” such as walking, hiking and dog walking. Indeed, on the day of the tour, an open area near the entrance to the property appeared to function as a de facto off-leash dog park (a use that has been the subject of criticism on neighborhood listservs).

Dan Levine wrote in his email to TLR, “I hope today’s elected leadership will find ways to balance [different] interests to support protection of key parts of the site (such as the trails), and expansion of the park amenities and open spaces at Ephesus Park and Ephesus Elementary, while also creating affordable housing and market rate uses that generate tax revenues.”

In an email statement to TLR, Chapel Hill Communications Manager Ran Northam wrote: “No decision has been made about the future use of the American Legion property. The Town Council last discussed this property at its Feb. 12, 2020, work session, just before the onset of the pandemic. At that time, the Council expressed an interest in a robust public discussion about the future use, which has been postponed by the pandemic. We expect projects such as American Legion to be part of the five-year budget strategy discussion in the spring. Those discussions with Council, staff and the community will help us prioritize our capital projects and in turn, determine our timeline.”