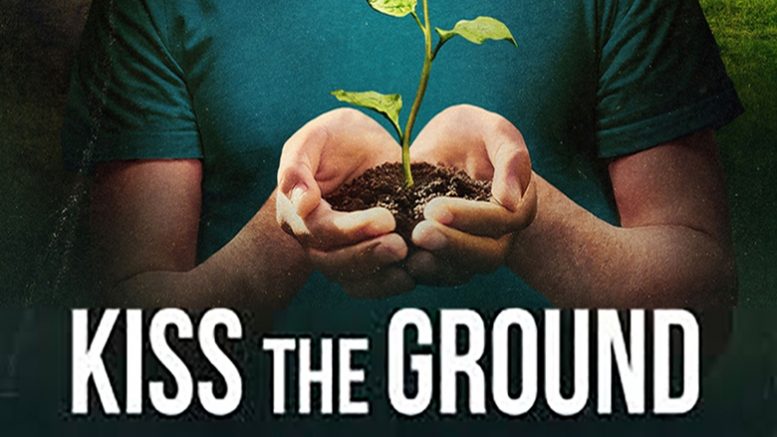 The future of the Earth and the people who live on it is dependent on the management of land and water. This is essential and something we can all agree on.

After that opinions vary, and then every once in a while a movie comes along that heats up the cocktail (or kombucha) circuit with polarizing views, generating discussion. Such is the case with the recently released Kiss the Ground.

Kiss the Ground is a new Netflix film narrated by actor Woody Harrelson. It’s about how regenerating crop and ranchlands can clean waterways, halt erosion, and help draw carbon out of the atmosphere, storing it in the Earth, which can slow the rate of climate change. Regenerative practices include using cover crops, reducing tilling, rotating crops, spreading compost, and moving away from synthetic fertilizers, pesticides, herbicides, and factory farming. The film’s storyline is about the restorative power of soil. It makes the case that the way we grow food could be an environmental solution. I asked Gail her thoughts about the movie.

“I recognized some of the agricultural experts featured in the documentary and I have respect for their opinions. My feeling after years of experience is that there is no silver bullet—for either climate change solutions or food system fixes.

“The fact is, we all care about the planet, and we all need to do our part to combat climate change.

“But it is so easy for people to blame farmers when they have never farmed or worked in agriculture,” she says.“I don’t believe we can change hearts and minds by insulting those who do things differently. More than 60 percent of the world’s population depends on agriculture for survival and yet farmers are often powerless over severe weather that can destroy crops or prevent them from planting or harvesting.”

Gail prides herself on staying on top of changing trends and farming practices. To that end she stays involved with the NC Foundation of Soil and Water Conservation, a non-profit group that works with soil and water districts to provide grant funding. Additionally, the U.S. Department of Agricultural and the Carbon Cycle Institute are working together to pave the way for broad adoption of carbon farming practices and Gail remains involved with that group. “It’s important to me to stay on top of science-based information, research-based facts. Hollywood is one thing, but agronomists and the commitment to soil science is what drives farming.”

The USDA and Carbon Cycle Institute work with Conservation Districts and landowners, completing the research necessary to show that carbon farming works.

But the movie isn’t the entire picture.

“We have to stop saying one type of agriculture is bad versus good. That makes it so hard to find solutions and common ground between different ways of doing things,” says Gail. “We need all types of agriculture.” Be the first to comment on "Soil. The stuff of life."