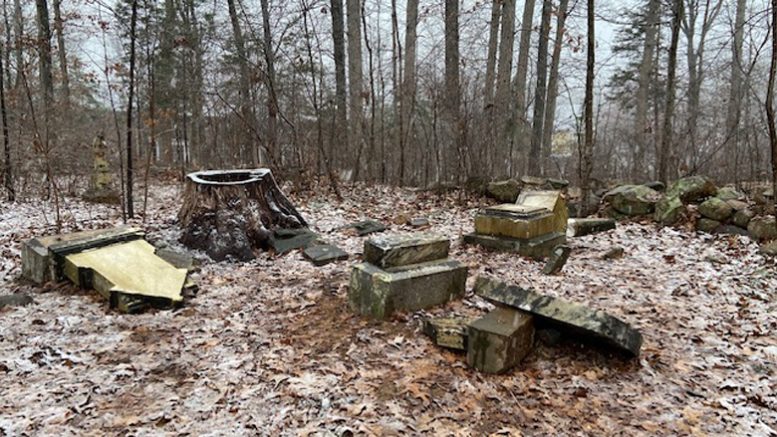 Southern Village’s Arlen Park Cemetery has been desecrated and a cross with a rope noose draped over it was part of the vandalism.

The cemetery, located on Arlen Park Drive in Southern Village, is a one acre preserved natural area at the top of the knoll in the development. The recent vandalism was very extensive and occurred between the 17th and 20th of this month, according to information provided to Chapel Hill Police. Carole Labrum, formerly of Southern Village, first came across the demolished head stones that had been toppled and broken while walking her dog on her usual route through the park. The next day she noted a cross made of sticks with a noose hanging off to the left side, just on the upper corner of the outside wall.

“It is a sign of pure hate — I was shocked,” Labrum said.

Labrum was one of the local residents who were horrified by the desecration.

“The Arlen Park Cemetery is a place of remembrance for me, especially on this day each year,” she said. “I use it as a place to go to commemorate my mother who taught me both respect and reverence for our ancestors. She taught me it was our duty to respect the dead.

“When I moved here four years ago the little woods that surrounded the tiny cemetery provided a substitute place of visitation since I can no longer make the trek to my family’s burial site.”

Labrum said she loved to visit the site. “It was a peaceful place,” she noted, “where children often played and built little forts with sticks.”

Now Labrum said she is heartbroken that an area that offered peace and tranquility has been shattered by what she describes as an intentional “hate crime.”

Emails on Southern Village listservs had been reporting recent damage to the cemetery starting on the 17th. The extensive damage and finding of the noose were reported later by Labrum, on the 21st.

After the discovery, Chapel Hill Police were contacted and a report was filed by Officer Eric Andersen. The investigation is ongoing.

“Officers are trying to gather evidence as to how recent the vandalism occurred,” CHPD Public Information Officer Ran Northram said.  He had no comment on the cross and noose. Anyone wishing to provide additional information can call 919-968-2760 and ask to speak to an investigator.

The cemetery, which dates from the 1830s, was last surveyed in March of 1974 and updated in 1996. It contains 11 marked graves and 14 unmarked or rough and broken stones and three depressions. The plot was originally surrounded by a stone wall several feet high, but only parts of the east and north wall remain. Before the Vandalism. Photo by Carole Labrum.

Locals often refer to the area mistakenly as the “slave cemetery.” The slave cemetery exists and is a separate area of mostly unmarked graves in a small patch of woods a few blocks away. There are no reports of the slave cemetery being vandalized at this time.

The Arlen Park Cemetery is the resting place of the Purefoy family. The oldest marker, dated 1850, is for the Rev. William H. Merritt, born in 1779, according to the Cemetery Census records in Orange County.

The cemetery is not actively maintained by the community or by private individuals.

Barber Calls the Community to Action

If the University is closed, how do you get people to visit Chapel Hill?