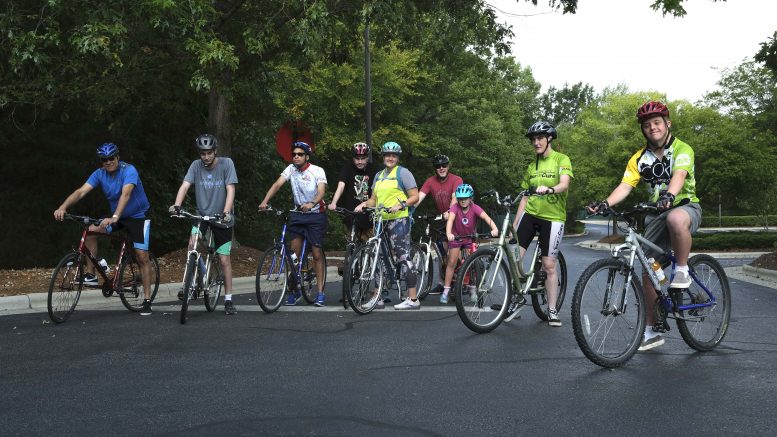 Special Olympics cyclists and coaches pause for a group photo on their way to the Meadowmont Trail. Photo by Michael Schwalbe.

No organ chords heralded the start of services; the music came from tire pumps and ratcheting freehubs. “We meet on Sunday mornings,” Colleen Lanigan told me as coaches checked bikes and adjusted helmet straps, “because it’s the quietest and safest time for our athletes. Some people call it cycling church.”

Lanigan, who works in the Town of Chapel Hill Parks and Recreation department, coordinates Special Olympics for Orange County. She got involved with the program in 1990 and has led it since 1995. Over the course of the year, Lanigan oversees 14 Special Olympics sports. She also raises funds to help keep it all afloat.

The quiet Sunday-morning space where Special Olympics cyclists gather is the parking lot next to The Exchange at Meadowmont, a location that provides easy access to the equally empty lots surrounding the UNC Friday Center, as well as to the Meadowmont Trail via a tunnel that runs under NC Highway 54.

Special Olympics sports are open to athletes with a primary diagnosis of intellectual or developmental disability. Registration is free. Loaner bikes, including three-wheel recumbents, are provided. Coaches and volunteers work with athletes to ensure that equipment and training are matched to each person’s needs.

The cycling program began in 2004 with 11 athletes. This year, 28 cyclists signed up for the fall season, which runs from late August to early November. The program is open to riders as young as three; the youngest this year is eight and the oldest is 41 (there is no upper limit). A one-to-one ratio of coaches and volunteers to cyclists allows each athlete to get individual attention.

Ahead of the first practice, athletes are put into teams—black, blue, green, yellow, and red—based on skill level. Coaches and volunteers then work with the teams to develop safe cycling skills. The most proficient cyclists, those in the black group, ride for an hour or more on nearby trails. Riders in the red group might stay in the parking lot, getting used to bikes and learning the basics. Special Olympics athletes can aim to compete in a state tournament at the end of the season, but this isn’t the goal of the program.

“Competition is not what we’re about,” Lanigan said. “The goal is for athletes to develop competence and a passion for whatever sport they play. It’s really to give people the skills to be more independent and able to engage in the community at large.”

“When she first came,” Kathard told me, “she used training wheels and rode only in the parking lot. Now she’s out riding with the blue group. I bike with her, kayak with her, hike with her. She’s really grown through all the Special Olympics sports.”

Another parent, Kathy O’Loughlin, has involved her daughter Colleen in Special Olympics cycling for 15 years. Colleen, who had a brain aneurysm before she was two and suffers from left-side hemiparesis, is able to ride using an adapted three-wheel recumbent provided by the program—an accommodation that typical school-based sports can’t provide.

“You learn a lot from other parents who have gone before you,” she said. “And you hope to pass that information on to younger parents. There’s no playbook to figure out what your kids can do in life, and this program lets you stretch your dreams, and your children’s dreams, into something that’s possible.”

The cycling program, like all Special Olympics sports, depends on a cadre of volunteer coaches and assistants. Jim Fink, one of three head coaches in cycling, also coaches skiing, snowboarding, and golf. His daughter Gillian, a Special Olympics athlete in multiple sports, has participated in cycling since 2009. She is now an assistant coach.

Fink, who describes himself as “not really a sports guy,” likes Special Olympics for the supportive environment it provides. “Part of the reward is seeing the innocence and how happy the athletes are to be out there doing what they can do, at their level,” he said. Coaching, he added, is a good karma thing to do. “You just feel the joy from the athletes.”

Part of Lanigan’s job is to recruit coaches and assistants. She is trying now to get a new generation of people involved. Many veteran coaches are aging-out and youth volunteers come and go, Lanigan explained, “So we really need dedicated young adults, people in their late 20s and early 30s, to step into leadership roles.” The program provides training for anyone who wants to coach a sport. At the end of the season, the Special Olympics cyclists, family members, and the coaching staff go for a celebratory ride on the American Tobacco Trail. “The little kids come out on their training wheels,” Lanigan said. “You see parents. Other athletes join us. Then we have food at the end. It’s lovely and ridiculously fun.”

This year’s Tobacco Trail ride is scheduled for November 6.

There are no sermons on Sunday mornings at Special Olympics cycling church. What athletes get are patient lessons in how to ride a bike safely and the chance to do so in a spirit of camaraderie with their peers. But there is something like a sermon in the air. I heard it. The message is that everyone deserves as much help as they need to experience the joy of cycling. Amen to that.